Cutting the Visa Knot. How Turks can travel freely to Europe

Red Lines for Albania. The EU and the June Parliamentary Elections

There has always been a risk that Albanian parliamentary elections on 23 June 2013 will fall short of international standards. This would likely precipitate a major political crisis in Albania. Another result would be the loss of any credible prospect of progress towards European integration in the foreseeable future and a spiral of political, social and economic decline in Albania. To counter this risk, ESI argues that the international community must take a strong and uncompromising stand on the democratic principles that must be observed. It must take a non-partisan approach of strong support to the rule of law. As Albania prepares for parliamentary elections on 23 June 2013 this paper draws attention to recent violations of democratic principles in Albania that provide the international community, and in particular the European Union, with an opportunity to make a crucial point of principle at a crucial moment in what is set to be a very right and heated electoral contest.

On 23 January 2013 a record 224 members of the parliamentary assembly of the Council of Europe (PACE) participated in a debate on Azerbaijan. There have never been more members voting on any resolution in the history of PACE. The vote was also historic because of its outcome: PACE rapporteur Christoph Straesser's resolution on political prisoners in Azerbaijan was defeated – 125 votes against 79 votes, with 20 abstentions – sending a very strong signal of support to the authoritarian regime in Baku. This debate is likely to be remembered for many years, and certain to stand as a reminder of just how successfully Azerbaijan has been able to capture and manipulate PACE.

Showdown in Strasbourg. The political prisoner debate in October 2012

It was the most dramatic vote in the history of the Parliamentary Assembly (PACE) of the Council of Europe: a vote on the definition of "political prisoner" and whether or not PACE had the responsibility to monitor the state of fundamental rights in member states. To understand just how much was at stake on 3 October 2012 in PACE, it is important to understand what led to this vote. The debate on the definition of political prisoners turned into a debate about the very legitimacy of any assessment of fundamental rights and freedoms in PACE. The debate that took place on 3 October was one of PACE's most contentious. It was one of the most well-attended debates in the organization's history. It was also the one with the closest ever result at the end of the debate.

A Portrait of Deception. Monitoring Azerbaijan or why Pedro Agramunt should resign

There are very few fellow members of the Parliamentary Assembly of the Council of Europe (PACE) who have been to Azerbaijan as regularly over the past decade as Pedro Agramunt, the conservative Spanish senator, a businessman from Valencia. Agramunt has been consistent in this approach to Azerbaijan: from the very beginning of his relationship with Baku he has been a defender of the Aliyev regime. The latest monitoring report is his masterpiece. It would be better for Pedro Agramunt to resign from his position as PACE's rapporteur for Azerbaijan, rather than stay in this position until 2015. Such a step would also allow Council of Europe monitors to again play a meaningful role in Azerbaijan. Azerbaijan has never needed a credible monitoring procedure more than now.

Since the visa requirement was lifted for Western Balkan countries in 2009, there has been a sharp increase in claims for political asylum by citizens of the region. Barely any of these applicants qualify for asylum. Rather, they are benefitting from national asylum rules that provide relatively generous benefits during the application process. Since 2010, EU leaders have demanded that Balkan governments take measures to stem this tide of asylum seekers. In fact, the problem lies with ‘pull factors’ inside the EU. Now, EU policymakers find themselves under increasing pressure to address the problem directly by suspending visa-free travel for Western Balkan countries. Such a draconian measure would undermine the credibility of the EU’s whole approach to visa liberalisation – not just in the Western Balkans, but also in Moldova, Kosovo, Turkey and the Ukraine. But it is by no means the only solution available. 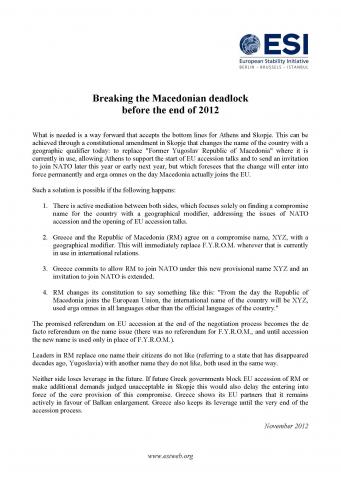 Breaking the Macedonian deadlock before the end of 2012

What is needed is a way forward that accepts the bottom lines for Athens and Skopje. This can be achieved through a constitutional amendment in Skopje that changes the name of the country with a geographic qualifier today: to replace "Former Yugoslav Republic of Macedonia" where it is currently in use, allowing Athens to support the start of EU accession talks and to send an invitation to join NATO later this year or early next year, but which foresees that the change will enter into force permanently and erga omnes on the day Macedonia actually joins the EU.

Caviar Diplomacy. How Azerbaijan silenced the Council of Europe

When Azerbaijan was admitted to the Council of Europe, despite well documented democratic failings, it was with the idea that Council of Europe membership would gradually transform Azerbaijan. Sadly, the reverse has occurred. The outcome is a tragedy for the citizens of Azerbaijan, particularly those brave pro-democracy activists who languish in jail as political prisoners. But it is also a tragedy for Europe, whose values have been trampled on. For the PACE parliamentarians enjoying the benefits of caviar diplomacy are also sitting members of national parliaments across Europe. And it is certainly a tragedy for the Council of Europe itself, which urgently needs to recover the values its founders entrusted it with if it is to justify its continued existence.