ESI has presented its proposals in:

and many other places across Europe

ESI's Rome Plan for the Mediterranean migration crisis has been endorsed by major German newspapers.

An article in the Frankfurter Allgemeine Sonntagszeitung on 4 July, discussing the crisis off the coast of Africa, concluded that the Rome Plan would likely be controversial, but "that it could work." An editorial in Süddeutsche Zeitung on 12 July writes about our proposal:

"In the long run, this could be the only solution that would leave something of a basic right of which Europeans are very proud: the right to asylum"

A front-page article in the weekly Die Zeit argued on the same day (12 July):

"Better that acting in moral panic is coolly searching for a plan offering something of real interest to states like Nigeria and at the same time meeting Europe's interest in a reduction of refugee numbers, less deaths in the Mediterranean, and a decent asylum procedure. The think tank European Stability Initiative has put forward a proposal which is as clever as it is feasible: the "Rome Plan".

"Is the EU-Turkey deal at risk of collapsing"
Deutsche Welle interview (20 March 2017)
"Germany, Europe, and the politics of refugee protection"
Presentation at Camden Conference (18 February 2017)

"We must better protect our external borders, but this is only possible if we reach agreements with our neighbours, for example with Turkey, on how to better share the task of dealing with the refugees. And this will mean more money for Turkey, which has many expenses because of the refugees. This will mean that we will accept a set number of refugees, in a way so that the human traffickers and smugglers in the Aegean will not earn money, but in an orderly way, this will also mean that we fulfil certain wishes of Turkey concerning the visa issue. One needs to speak about this now, in order to then arrive at a common will to control the borders; and also to enable refugees now in Turkey to have a life, so that they will not all run away but stay there." 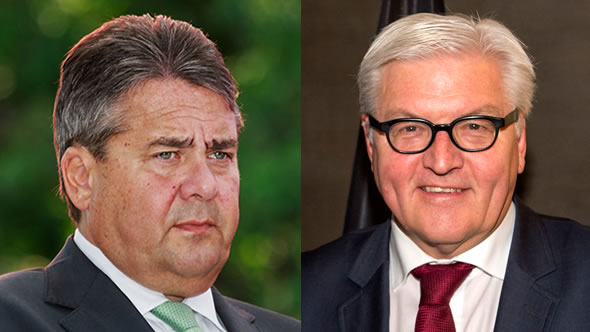 "If Turkey is ready to make a big contribution to securing the common border with the EU and, at the same time, will readmit refugees who try crossing that border, then the European Union has to actively support Turkey in return … then Germany should – in return – resettle contingents of Syrian refugees within the framework of a European effort as it already did in the case of other civil wars. The people on these contingents shall be safely brought to Europe and Germany. Instead of chaotic and uncontrolled immigration on dangerous routes as it is now, orderly and safe resettlement of civil war refugees. The rule must be: Women and children first. Priority for families! This procedure will increase control over who is coming to us because asylum claim, identity verification, and registration are all being done before immigration. At the same time this means that people who are seeking protection do not need to take the perilous route through the Mediterranean and the Balkans. Nobody should risk their lives trying to reach Europe. That's a high standard but it must not be lower."

The EU urgently needs a credible policy on asylum and border management – one that combines control of land and sea borders with respect for existing refugee law. It must treat asylum seekers respectfully and deter irregular migration by those who do not qualify for protection.

This plan must recognize a basic truth – which holds for Italy as it does for the rest of the E.U. – that member states are bad at returning third-country nationals who do not qualify for protection. This is largely because most poor countries in the world have little interest in taking back their own citizens, who often send remittances.

The Need for Return Realism

How can the E.U. reduce the number of arrivals – and deaths – in the Central Mediterranean? The key lies in quickly processing asylum applications and in quickly returning those whose claims are rejected to their countries of origin. This requires fixing a "day X" – a date from which countries of origin commit to help take back without delay all of their nationals who have arrived in Italy and do not get protection.

The impact of such a policy would be a sharp fall in arrivals. Nigerians were the largest group of arrivals in Italy in 2016. The majority would be unlikely to risk their lives going through the Sahara, Libya and the Central Mediterranean – and spending heavily on smugglers – if the probability of being returned to Nigeria within a few weeks of arrival in Italy was 80 percent.

Ensuring that Nigeria, Senegal and other countries take back their nationals who do not qualify for protection after an agreed date should be the chief priority in talks between the E.U. and African countries of origin – similar to the commitment Turkey made to take back without delay people who arrive in Greece after March 20, 2016.

These agreements must also offer incentives, such as access to annual quotas for legal migration, including via scholarships and work visas. Such agreements would have no direct impact on current remittance flows.

What is needed is a short, simple statement of mutual commitments, similar to the E.U.-Turkey statement in March 2016 or the two U.S.-Cuba statements of 1994 and 1995 (see annex A here). The E.U. needs similar agreements, known as Legal Access and Return Statements (LARS), with African countries of origin now.

Italy needs an asylum system that is able to process all claims within a few weeks. This should be the top priority for Italy and the E.U. – developing Italy's ability to deal with claims within four to six weeks, while ensuring a high quality of decisions through quality control mechanisms and trained staff, competent interpreters and available legal aid.

This is above all else a matter of resources and competent management. Quick decisions and rapid readmission, based on E.U. take-back agreements with African countries, would sharply reduce the number of people who stay in the E.U. after their applications are rejected.

Such a system would also reduce the number of people arriving in Europe with little chance of receiving protection as refugees. The number of people arriving outside of formal migration channels (irregular arrivals) will become manageable, there will be less business for smugglers and fewer deaths at sea. The aim should be to reduce the number of all irregular arrivals by sea to far below 100,000 a year (for an E.U. of over 500 million people) in 2018.

Almost all current irregular arrivals to the E.U. come through Greece and Italy. Sending E.U. asylum missions to these two countries would dramatically reduce the pressure on all other European asylum services as well. These missions are composed of asylum experts from E.U. countries who will be integrated into first-instance decision-making upon the request of Rome and Athens. Then, everyone who receives protection as refugees should be subject to relocation across the E.U.

If such a plan were implemented, there would be no need for the doomed debates over reforming the Dublin regulation that are currently taking place in Brussels. A Rome/Valletta mechanism – based on E.U. asylum missions in border states, reformed relocation of those who are granted protection and E.U. readmission from these states – should replace the current Dublin system.

E.U. member states should simultaneously push forward the global debate on orderly transfers of refugees through resettlement. The only way to do so is to lead by example, building up E.U. capacity for resettlement as well boosting the U.N. refugee agency's capacity to do more. In recent decades, global resettlement has not exceeded 100,000 a year and the U.S. has taken the lion's share of those moved.

Under the Trump presidency, the U.S. is unlikely to continue to play this role and the E.U. needs to step up its efforts. Until now, European states have not built up the bureaucratic machinery for large-scale resettlement. A full implementation of the resettlement provisions of the E.U.-Turkey statement is vital for this reason and is an urgent priority that all human rights organizations should be lobbying for today.

European leaders need to demonstrate to their electorates that it is possible to control external sea borders without undermining the Refugee Convention. Europe can protect both human rights and its borders with the right focus and a plan based on humanism, realism and interests.