Austria's parliamentary elections on Sunday, 1 October, 2006, produced a result nobody had expected.

The Austrian Social Democrats (SPÖ), scoring 35.7 percent, won. Alfred Gusenbauer, the SPÖ leader since 2000, is likely to be the next Chancellor.

The loser of these elections is the party of the current Chancellor, Wolfgang Schüssel, the Austrian People's Party (ÖVP). It lost 8.1 percentage points, reaching 34.2 percent.

The ÖVP had led a coalition government with a smaller right-wing party (FPÖ/BZÖ) since early 2000. The SPÖ had led all Austrian governments from 1970 to early 2000.

The third-strongest party is the right-wing Austrian Freedom Party (FPÖ) of Heinz-Christian Strache. Jörg Haider had left this party in spring 2005 to create his own Future of Austria Coalition (BZÖ). The Freedom Party won 11.2 percent of the votes, and the BZÖ 4.2 percent.

The Green Party came forth with 10.3 percent, but remains too small to join a government coalition with either the SPÖ or the ÖVP.

The most likely outcome is now a grand coalition of SPÖ and ÖVP, led by Alfred Gusenbauer. This change of government in Austria has implications for Austrian policy towards Turkey.

Implications for Turkey
1. The right-wing parties (FPÖ, BZÖ) have increased their votes and have become even more aggressively opposed to Turkish accession  but they are also more isolated now than before.

The issue of Turkish accession has figured most prominently in the campaign of the FPÖ. Opposition to any negotiations with Turkey has been the main demand of this party and it is listed as the main issue on the party's own website (what we stand for: ).

This position is hardly surprising. The FPÖ is opposed to the European Union. It has most recently objected to the ratification of the accession treaties with Bulgaria and Romania (as the only party in the Austrian parliament). It is opposed to foreigners and dislikes Muslims.

Its position, however, is unlikely to have any direct political consequences. All other parties have excluded the option of forming a coalition with the FPÖ under its current leader Heinz-Christian Strache.

Jörg Haider, the leader of the BZÖ, has often changed his positions. In the late 1980s he was for Austria joining the EU, and in the early 1990s he was against. In the late 1990s he opposed EU enlargement, while since late 1999 he has supported it. In 2004, he argued for Turkey starting negotiations. Since 2005, he has argued against it. His influence is also seriously diminished as a result of these elections.

2. The Austrian Social Democrats are the real winners of these elections. In opposition they have been the most Turkey-critical Social Democratic party in Europe.

In late summer 2004, the SPÖ has made a policy switch, from supporting the EU consensus on Turkey to opposing Turkish accession negotiations. This was led by Josef Cap, the SPÖ caucus leader, and adopted by Alfred Gusenbauer, the party leader.

The position of the current SPÖ on Turkey has been most clearly expressed in a motion presented in Austrian parliament on 15 December 2004. This resolution asked Austrian chancellor Schüssel to veto a possible European Council decision on Turkish accession negotiations:

"requesting the Austrian government not to consent to the start of accession negotiations with Turkey at the European Council on 16 and 17 December 2004, and to support instead further intensification of relations between the EU and Turkey in the form of a strategic partnership, built along the European Economic Area (EAA)-model, for which negotiations should start immediately."

This position has been repeated at different occasions by the party leadership. Josef Cap has argued that previous Social Dmeocratic commitments to Turkish accession no longer mattered:

"I am indifferent to what (Austrian) social democrats said before or did not say before. We have to devise politics now Granting candidate status to Turkey in 1999 was a mistake. This has all been discussed and decided upon in a real, real elite circle. Even many who are also in politics are not included in this process.  We want the EU accession perspective to be excluded ... The Brits want a loose customs union, where as many as possible join, and whoever says yes to Turkey will have to say yes to Ukraine, Morocco, a whole group will come and line up."

Gusenbauer himself has supported Cap's position:

"Turkey in the EU would spell the end of the EU, if that does not happen before anyway. What I understand as integration might not even be possible with 25 member states anymore. The pace of enlargement has been too high It is not a problem for me that the majority is Muslim. But my reservations are, first, that really, Turkey means in fact two countries in one. Secondly, human rights remain an open issue. Despite progress happening in Turkey, I generally decipher a dilution of the EU membership criteria."

This position has turned the SPÖ into the most Turkey-sceptical social democratic party in Europe.

There are some facts however, qualifying the current position. First, the SPO has often changed its position on this issue in the past three years (see Annex3). Second, a number of important SPO leaders remain in support of a constructive policy on Turkey. And thirdly, there has until now been neither any internal discussion nor any efforts by Turkish institutions  including Social Democrats in Turkey  to make a case for a different policy.

The SPÖ has pursued a different, more open policy on Turkey until 2003, and some of its leading politicians have remained committed to this. In December 1999, outgoing SPÖ chancellor Viktor Klima signed the Helsinki Council's resolution to grant Turkey candidate status. In 2002 senior SPÖ politician Caspar Einem praised the Copenhagen Council's decision on Turkey:

"We should accept that Turkey is now on its way towards Europe. We have already lost a lot of chances in our neighboring countries, because we (Austrians), once it came to the crunch, turned into fearful skeptics rather than friends.  We should do it better this time. Let´s develop a special and close partnership with Turkey. This will also help once Turkey has joined the EU."

In 2005, Heinz Fischer, Austria's social democratic president of state, wrote a joint letter with six other EU Heads of State, arguing in favour of continued enlargement:

"the EU's open door'- policy proved to be successful. The accession of new members has given Europe new momentum and new possibilities. ..As regards the enlargement agenda, the principle "pacta sunt servanda" must apply. What has been agreed has, of course, to be respected."

As recently as 21 July 2006, Alfred Gusenbauer himself rejected the idea of enshrining a referendum on Turkey into the Austrian constitution.

"I think it would be a little strange to introduce a constitutional law for a single case."

The position of powerful regional leaders within the party is also interesting: these are Michael Häupl, Vienna's SPÖ mayor, and Gabriele Burgstaller, Salzburg's SPÖ federal governor. These are two of the most influential leaders in the national party. Häupl told a newspaper in summer 2005:

Häupl: I do not fool myself. People do not want Turkey in the EU, nor the Balkans. I understand that, but I do not hide my opinion on negotiations with Turkey either. However, in terms of regional peace, the Balkans are more important to me than Turkey.

Kurier: You are in support of open-ended Turkey negotiations. That can cost you votes.

Häupl: That is where I stand, and I cannot do otherwise."

The SPÖ has been divided internally, but the pro-Turkey voices have not managed to change the party leadership´s decision to oppose negotiations towards full membership with Turkey. Those pro-voices include prominent former SPÖ politicians who have also helped lead Austria into the EU, such as Hannes Androsch, a former finance minister, Franz Vranitzky, a former chancellor, and Peter Jankowitsch, a former foreign minister.

Within Austria, the SPÖ has the strongest institutional, personal, and political links to the Turkish community. There is also a strong wing within the SPÖ that focuses on human rights, labour union rights, and women's rights around the world. So far, however, this has not influenced perceptions of contemporary Turkey largely for lack of any contacts.

Bettina Stadlbauer, the SPÖ's spokesperson on women's affairs, is a good illustration. She has been very much involved on women's rights issues in other parts of the world. She warned in the Austrian parliamentary debate on 15 December 2004, two days before the European Council meeting:

"One negotiates with a state where every second woman in Eastern Anatolia is illiterate, where 50 percent of girls are not granted access to education, where sexual violence against women happens in prisons, where there are forced marriages and honor killings. Regarding virginity tests, Turkey only changed things to calm the EU. The chancellor and the foreign minister do not act honestly here. Rather, they merely aim at fake negotiations."

In summer 2006, Stadlbauer told ESI that,

"I have not had any direct contact with any Turkish MP so far. I have never been to Turkey. There has never been a Turk at the woman federation meetings of the European Social Democrats (SPE), although the CHP is an associate member of the SPE. In April 2006, we had a conference with the woman federation of the Socialist International (SI). There was no Turkish representative either."

It remains unclear whether Wolfgang Schüssel will remain in the government and continue as party leader in the case of a grand coalition. However, the policy of his government on Turkey since 2002 has been based on a broad consensus of senior ÖVP party members. It is unlikely to change.

From 2004 to the election program issued in September 2006 the ÖVP has supported negotiations with Turkey. It has accepted that full membership is the goal of these negotiations. It has stressed the need to focus on the absorption capacity of the EU. It has also promised a referendum on Turkey. Unlike in France, however, there is no provision in the Austrian constitution that requires such as referendum.

Since early 2004 all Austrian parties except the Greens actually attacked Schüssel for being too supportive of Turkish aspirations.

Until today, the ÖVP specifically refrained from engaging its party basis on the Turkey question:

"Changing public opinion on Turkey is a steeper challenge than convincing Austrians to vote for EU-accession in 1994, or getting them on board for the 2004-enlargement round. Our primary task is to win elections."

In light of Austrian opposition from other political parties and the public, the ÖVP has tried to present itself as slowing down without derailing the process of accession. In June 2006 an ÖVP MP and chairman of the Austrian-Turkish friendship group in parliament described thinking among ÖVP parliamentarians:

"There is now a rather negative attitude among people regarding Turkish EU accession. This is dependent on how Turks live here in Austria. Strong immigration in the past decades has led to the creation of foreigner ghettoes, especially in big cities. This determines Austrians´ image of Turks. .. There is a careful opening towards Islam. However, this has to be a mutual process, and this has to also apply to Christians in Turkey."

The ÖVP has been Austria's enlargement party. Austrians have profited more than anyone else in the EU15. The Austrian business community is the largest foreign direct investor in Croatia, Bulgaria, and Romania. While many of these business organisations have not yet put Turkey on the map, few are principally and fundamentally opposed to negotiations towards full membership with Turkey.

Finally, there is the camp of those who have supported all previous enlargements  despite negative opinion polls  and stress the priority of the Western Balkans but who remain to be convinced and are open to argument. A premier representative of this camp within the ÖVP is Erhard Busek, former Vice Chancellor, special representative of the government for the 2004 enlargement and today head of the Balkan Stability Pact. Busek proclaimed some months ago that,

"countries who fulfil the conditions and that want to join the EU and are in Europe, should of course do that." 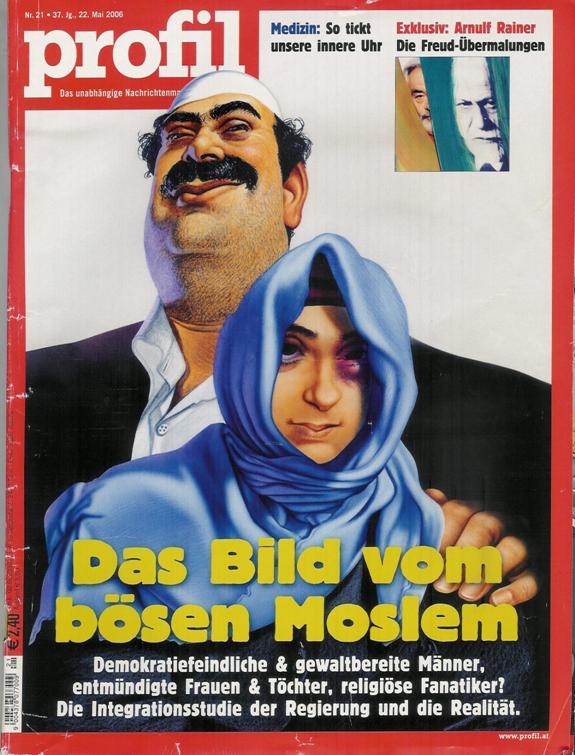