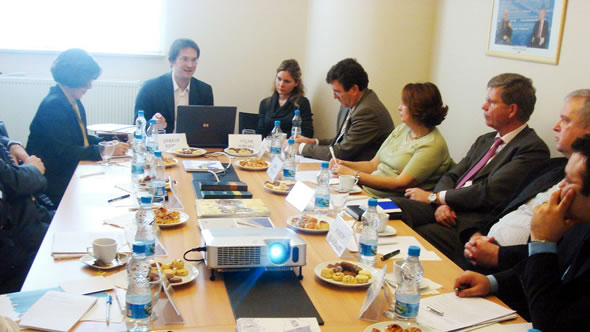 Presentation at the German Marshall Fund of the United States in Ankara. Photo: GMF

Between 10 and 14 February, Gerald Knaus and Nigar Goksel were in Ankara meeting representatives from the foreign ministry, presidency, parliament, think tanks and various political parties to discuss Turkey's soft power in the region and particularly the new initiatives with neighbouring Armenia.

On 13 February a joint event was held at the German Marshall Fund of the United States where Gerald Knaus presented ESI analysis on the Turkey debates in Austria, the Netherlands and Germany. The main messages reflected through the case studies targeted some of the myths in Turkey such as that enlargement fatigue is unique to Turkey or that deep historical and essentialist reasons are central to the scepticism towards Turkish membership in countries like Austria, and thus that the conclusion is pre-ordained (please find more information on ESI's research on "Europe debating Turkey" on our website).

Another issue taken up was the virtue of knowledge-based debates in countries which seem positively inclined towards Turkey however where opinion is not necessarily informed. Countries in Central Europe for example that seem to be supportive of Turkey's membership could very quickly spiral downwards in their perception of Turkey if political winds change direction or as a result of the spinning of an unpleasant event in society involving Turkish migrants. The reason for this is that there is really not much information as to the positive change in Turkey and there are few intellectuals that can make a convincing case for Turkey's membership. The current support is vague in its reasoning - not informed by firsthand experience, business links, or in-depth studies on issues such as the impact of Turkey's membership on agriculture or migration. Even in big countries like Germany, a handful of people can be instrumental in shifting the mood towards Turkey. A much more targeted effort needs to be conducted by Turkish public diplomacy actors to win the hearts and minds of different European societies. Instead of denying problems, efforts should be focused on breaking down taboos and overcoming remaining challenges in Turkey.

After the presentation an intense exchange of views took place as to what concrete steps could be taken in moving forward. The need to create success stories in Turkey that could later be presented to European audiences was a central point. As the event came at a time when the creation of a gender equality commission was being debated in the Turkish parliament, it was noted for example that the demand stemming from women's organizations and women parliamentarians was indicative of progress but achieving a functioning committee would be a tangible step that could be pointed to at meetings in Europe. Though Turkey lags behind every EU member state in terms of gender equality, making the recent positive trends known in Europe is critical. To this end, in summer 2007 ESI released a report titled "Sex and Power in Turkey" which not only tracks the legislative change but also the driving forces in society and the regional differences in implementation of the changes meant to empower women in Turkey.

Gerald also related the deep rooted fears of "conservative Anatolia" in European audiences and explained the importance of breaking down mental barriers with fact-based research such as ESI's report on "Islamic Calvinists".

Among the participants were:

The ESI team was invited to make similar presentations at other Ankara-based institutions in months ahead.