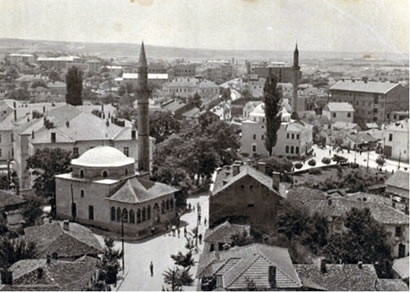 When the American Mary Motes, the first foreign English teacher ever admitted to the local faculty, arrived in Pristina in 1966 she found a city without traffic:

"[A]bout once a day a lone car might be seen to slow down behind a truck which was being reduced to a crawl by a bullock cart. An authentic traffic jam, it was the signal for some youth to raise the ironic cry: Oh look! London. "

On market days, she saw horse-drawn carts and men in traditional costume but no Albanian women. By 1970, however, cars had begun to arrive in Kosovo in larger numbers. With state-subsidised credits families bought the "Fico", the small Fiat made in Serbia. The traffic statistics noted a sudden increase in car accidents. In 1970 Kosovo's first traffic light was installed in Prizren, even before Pristina.

Mary Motes lived in a faculty building in the centre of town, where there was "more livestock round the Faculty then students", including two water buffalo. The older houses in the city centre of Pristina still lacked running water. Cholera had broken out in the summer and tuberculosis was still a problem, with people generally blaming the water. The only other foreigners living in Pristina "were a small group of East European engineers on loan to the local power station".

"Pristina was so bright at night; so many street lights everywhere […] a strange new university library […] Bankos, Kosovoinvest, Agrokos […] cars parked everywhere […] most impressive of all, so many Albanian girl students […] everywhere there was the sound of Albanian […] Pristina now had a big new store with an elevator […]"