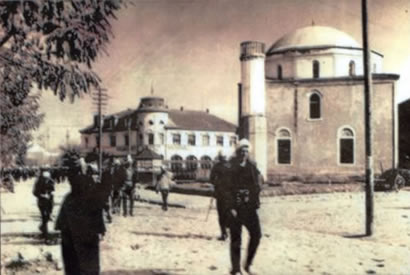 In 1908 Edith Durham, an English woman who had become deeply involved in Balkan affairs, travelled through northern Albania and Kosovo. Her book, High Albania, is a classic of the period, still in print and extraordinarily relevant even today. At the time Pristina was not the major town of Kosovo that it is today, and clearly she was not impressed by it. She arrived there by coach:

After barely an hour's drive over two low hills, we saw Prishtina below us, gay with red roofs, green trees, and white minarets. Within, it is frowsy, dirty, tumble-down - a shade better than Djakova, and that is all that can be said [… ].The population is mixed, and the statistics impossible to obtain, as every one gave different figures. There are about 2500 houses, of which about a quarter are Orthodox. Of these many are Vlahs, not Serbs. There are also a considerable number of Spanish Jews – some said as many as 200 houses, and there are no Roman Catholics at all. The bulk of the population is Moslem, mostly Albanian; probably some Moslem Serbs.

The bazar, partly roofed, but the roof all to pieces, was full of foreign rubbish of the cheapest description – one of the benefits of the railway. There was a sickening display of diseased meat in the butcher's quarter. The silver-workers here, as elsewhere, were all Christian. Of one – a Vlah from Monastir – I bought a charming little amulet, made of a mole's foot.