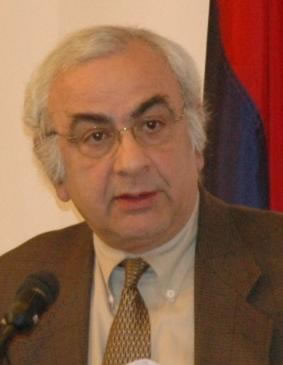 Gerard Libaridian, who holds the Chair in Modern Armenian History at the University of Michigan, is one of the most eminent US scholars of Armenian background. As adviser (1991-97) to President Levon Ter Petrossian, Libaridian was the architect of Yerevan's policy vis-à-vis Turkey. Gerard Libaridian was also actively involved in the Workshop for Armenian Turkish Scholarship (WATS), which organised several meetings and discussions between Armenian and Turkish scholars between 2000 and 2006. In 2007, Libaridian and Muge Gocek presented a curriculum entitled "Armenian-Turkish relations beyond the 19th Century". Born in Lebanon, Libaridian comes from a family that survived the early 20th century Armenian massacres.

Much of Libaridian's research has focused on Turkish denial of the Armenian genocide. In Turkey, as he puts it, the issue has been "denied, trivialized or explained away."[5]

In a 2005 article entitled "The Past as a Prison, The Past as a different future", Libaridian argues that Turkish denial of the genocide will not make it go away. Just the opposite:

"The Turkish side, and especially officials and policy makers must realize that, however the events of 1915-1917 are characterized, there is no doubt that they brought to an end the collective existence of the Armenian people on their ancestral homeland. […] For the less traumatized progenies of the survivors in lands nearby and distant, the past is the present. Denial of the genocide is a denial of not only their past but also their present.

Furthermore, the sustained policy of denial of that past by successive Turkish governments only infuriates the new generations of Armenians; it makes it more difficult for them to focus on the historical context in which these events took place or to generate a desire to understand the position within which Turkish society finds itself. […]

The more the Turkish state denies the past, the more adamant the new generations are in asserting it. That part of the collective memory tends to take over as the determinant of their identity, more difficult to transcend, more important to have others recognize it. There are good reasons why the use of the term "genocide" has become so important for the Armenian side."

The onus is not exclusively on the Turks, however. The Armenians, says Libaridian, must also learn to understand and appreciate the trauma of the Turks' Ottoman past, as well as the effect it has on Turkey's policy towards Armenia.

"The Armenian side must recognize that the Great Powers did in fact prey upon the Ottoman Empire; until the rise of the Kemalist Movement the rivalry between Great Britain and Russia was probably the main reason why Anatolia did not suffer the same fate as Africa in their hands. The importance of the centrality of Great Power threat to the Ottoman state cannot be underestimated; nor can one underestimate the role of that threat in the rise of the modern Turkish state and in Turkish perceptions of the past.

That such historical facts are also used to justify a security oriented state, the role of the military in Turkish politics, and the use of force to settle political conflicts, is very much part of the ideology, just as the Genocide is at the basis of territorial demands from Turkey for some Armenian political parties.

Such territorial demands feed into the logic of denial: recognition of the Genocide, Turkish officials argue, will result in the demands for reparations, including territorial ones. Whether Turkey will face a real threat in this area is immaterial; what matters are that such fears find a receptive audience, are embedded in the political psyche, and are easily manipulated in a society educated in the historical threat of dismemberment."[6]