Washington – Broader Implications of the Human Rights Crackdown in Azerbaijan 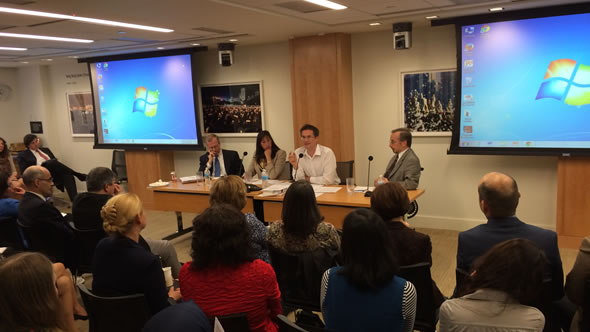 ESI's Gerald Knaus and Paige Alexander (USAID) discussed the implications of the ongoing crackdown on human rights in Azerbaijan. More than 100 people attended the event, from Congress, the US administration, embassies, NGOs, as well as journalists.

Over the past year, Azerbaijani authorities have escalated pressure on human rights activists and NGOs, further closing space for civil society and dissent. Azerbaijani authorities have targeted both domestic and foreign NGOs, placing procedural hurdles that prevent them from working, launching administrative and criminal investigations, and imprisoning or forcing into hiding or exile many outstanding civil society activists and journalists.

"It's time, therefore, for the United States to apply a law modeled on the 2012 Sergei Magnitsky Rule of Law and Accountability Act to authorities in Baku. A number of Azerbaijani activists have called for such measures. Given the reported assets the Aliyev family and its circle hold overseas, freezing their assets and denying them access and travel to the West might just do the trick. The State Department should also issue a travel warning to American citizens alerting them of the surveillance, harassment, and possible detention they might face in Azerbaijan.

At a time when Vladimir Putin is continuing Russia's aggression against Ukraine, some will argue that, for geopolitical reasons, this is not the time for the United States to get tough on Azerbaijan. There is never a good time to take such steps, but the situation inside Azerbaijan demands a response now. Further Western expressions of "concern" or characterizations of the situation as "unacceptable" would sound increasingly hollow. The Aliyev regime must understand that there are consequences for its abuses."