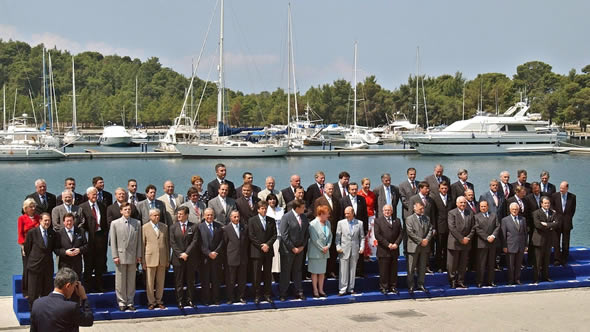 The EU-Western Balkan Summit in Thessaloniki in 2003 firmly underlined the accession perspective of the Western Balkan countries. Photo: Greek government

ESI Senior Analyst Alexandra Stiglmayer participated in a workshop themed "Thessaloniki II", which was organised by the German Friedrich-Ebert-Stiftung (FES) in Brussels.

The idea of this project is to combine the forces of a  group of experts from Western Balkans countries, EU member states and think-tanks in order to review the current EU enlargement framework and to brainstorm about possible ways how to regain a momentum for enlargement and accession. The Friedrich-Ebert-Stiftung plans to publish a brochure with the recommendations and to organise events in order to advocate them. The workshop was preceded by a dinner at which Stefano Sannino, the European Commission's Director-General for Enlargement, outlined the current situation.