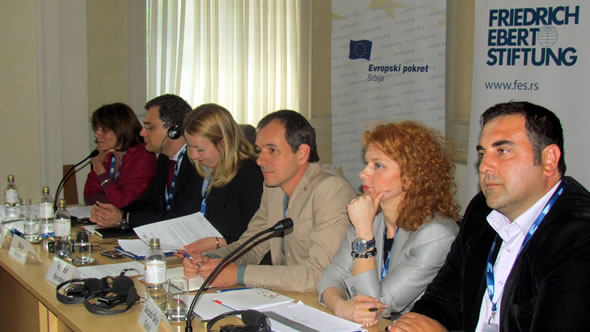 Kristof Bender attended a conference on regional co-operation and European integration, taking place on 6 June in Belgrade. The event was organised by the European Movement in Serbia and the Friedrich Ebert Foundation.

Kristof, speaking at the opening panel, argued that while regional co-operation in itself bears a number of benefits, in relation to the EU accession process two aspects are important: First, the EU puts some emphasis on regional co-operation as a condition for EU membership. While increased cooperation is usually positively noted by the EU's institutions, eventually only major disputes prohibit progress towards membership. In the Western Balkans there are currently two such issues: One is the Greek-Macedonian dispute about Macedonia's name, which since 2009 is the single obstacle preventing Macedonia from starting accession negotiations. The other issue is Serbia's position on Kosovo. It has become increasingly clear that for Serbia to start EU accession negotiations a more pragmatic approach by its government will be required. This means foremost to stop hindering Kosovo to fully participate in regional bodies and international institutions as well as following up with the implementation of other agreements reached with the government in Pristina. In the longer term, Serbia will need to recognise Kosovo or find a solution which in practical terms comes very close to recognition, in order to be admitted to the EU. As the objection of a single EU member state would be enough to prevent Serbia from joining, this is a reality that cannot be ignored.

Second, regional co-operation can also be used by a group of countries as a tool to advance their accession prospects. Notable recent examples are the Baltic Council of Ministers and the Visegrad Group or V4, comprising the Czech Republic, Hungary, Poland and Slovakia. While there are many regional bodies in the Western Balkans, including the Regional Cooperation Council (RCC) and the South-East European Cooperation Process (SEECP), none of them offers a structure able to communicate a consistent and pointed joint message from the Western Balkan countries aspiring for EU membership.

While advocacy of the Baltic countries or the V4 included only 3-4 countries, sharing a clear common goal and the belief that joint advocacy is helpful, the regional bodies in SEE have either a rather technical orientation or include besides the Western Balkan countries also EU members close to the region and/or other aspirants like Turkey or Moldova. While this makes sense for co-operation in many areas such as energy, transport, education or culture, it is very difficult, if not impossible, for bodies with such heterogeneous members to come up with clear and pointed political messages.

In the past, there were effective joint initiatives like the one led by late Macedonian President Boris Trajkovski in the run-up to the Thessaloniki Summit in 2003, involving close co-ordination between Western Balkan countries and joint op-eds of political leaders in international papers. In the meantime relations between the countries in the region have further improved, but such initiatives are today absent. Clear joint political messages would be very useful today, a positive sign from the Balkans, improving the image of the region, making it easier for friends of the Western Balkans to make the case for further EU enlargement in this region. 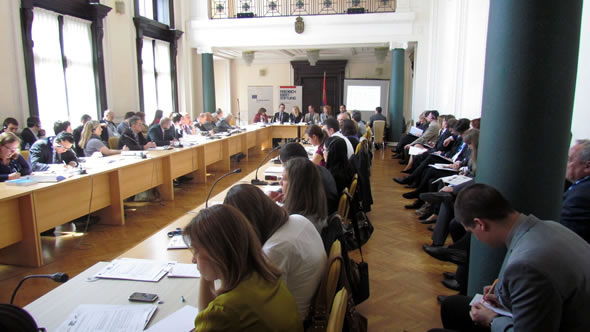