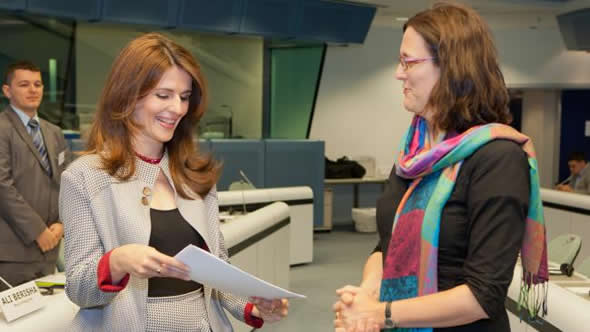 On 14 June 2012, Kosovo received its long awaited visa liberalisation roadmap, which lists all the reforms and requirements that it needs to complete in order to qualify for visa-free travel to the Schengen area. At a small ceremony in Brussels, Home Affairs Commissioner Cecilia Malmstrom handed the roadmap document to representatives of the Kosovo government including Minister for European Integration Vlora Citaku and Interior Minister Bajram Rexhepi.

Kosovo is the only remaining country in the Balkans whose citizens are asked to acquire a visa to enter the EU. Five of Kosovo's neighbours – Albania, Bosnia, Macedonia, Montenegro and Serbia – were granted visa-free travel to the EU at the end of a process that took place between 2008 and 2010.

ESI had campaigned for a roadmap process for Kosovo since 2009. In the summer of 2009 its advisory board, which includes former European interior ministers Giuliano Amato and Otto Schily, published an open letter arguing that Kosovo "must be given the opportunity to implement the same far-reaching reforms that the other five Balkan countries have set out to implement and to thus contribute to its own security, as well as to that of the entire region and the whole EU".

The European Commission recommended a visa liberalisation process in October 2009, but – due to fears of migration and disagreements about Kosovo's status – EU countries were slow in following up. ESI continued to urge the EU to treat Kosovo in the same way as its neighbours, notably by publishing two papers, "Isolating Kosovo? Kosovo vs Afghanistan 5:22" (in November 2009) and "Isolation Confirmed. How the EU is undermining its interests in Kosovo" (in 2010).

One of ESI's long-standing demands has been that the EU's catalogue of conditions for Kosovo be called a "roadmap", as in the case of the other five Western Balkan countries. For a while, the Commission used the term "comprehensive strategy to guide Kosovo's efforts to meet the EU's requirements for visa liberalisation." In our November 2010 paper "Isolation Confirmed", we explained how member states such as Germany argued that the term might imply automaticity and a short implementation process. We are pleased to see that the EU's has got over such fears.

As our analysis "Moving the Goalposts?" shows, there are differences between the roadmap for Kosovo and that for the first five Western Balkan countries, but the differences do not preclude a merit-based technical process that it strict, but fair:

"The Kosovo roadmap lists more benchmarks than the roadmaps for the other Western Balkan countries, but the requirements are essentially the same. It makes provision for the fact that Kosovo has not been recognised by five EU member states and that it is not a member of the UN and the Council of Europe. This need not make meeting the conditions more difficult for Kosovo.

"What is of concern is the possibility of amendments of the roadmap during implementation, which potentially undermines conditionality and the merit-based approach. Kosovo should be given the same strict, but fair process as it neighbours.

"Although the ultimate decision to grant visa-free travel rests with the Council and the member states, it is important that, like in the case of the other Western Balkans states, the Commission is in the driver's seat during the technical process. As long as this is the case, Kosovo policymakers and civil society should be able to learn from the reform experience of Kosovo's neighbours without concern for the goalposts being moved by the EU during the process." 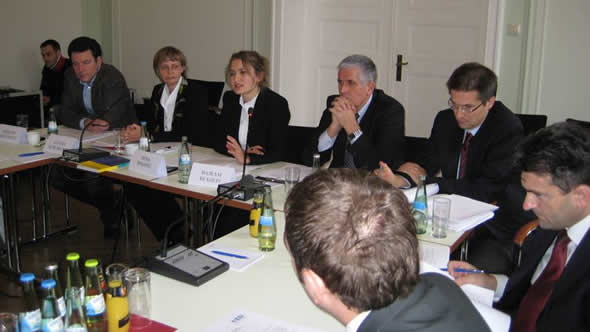 Kosovo Interior Minister Bajram Rexhepi (second from right) next to ESI analysts Gerald Knaus and Besa Shahini at an ESI event about the visa issue for Kosovo, which was organised in Berlin on 11 November 2010. Photo: ESI
Please enter your search term