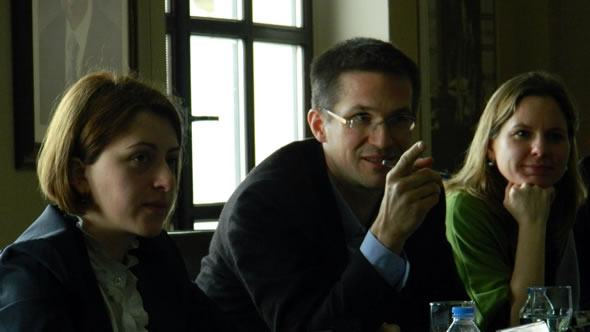 The prospects for stability and instability in the Caucasus in 2013

-A view from Georgia-

President of the Georgian Institute for Strategic Studies

The Hall of the Board of Trustees, Kadir Has University

Eka Tkeshelashvili was born on 23 May 1977 in Tbilisi, Georgia. In 1999 she graduated Tbilisi State University International Law Faculty with honors and continued with L.L.M in International Human Rights Law at University of Notre Dame (Law School), Indiana, USA in 2001 on the bases of Muskie/FSA Graduate Fellowship. In 1999 she was also involved in Joint Program in Human Rights Law of Oxford University and George Washington University in UK. Between 1997 and 2010 she worked in the Georgian government as deputy minister in several ministries, and served as the Prosecutor General of Georgia. She became the Minister of Justice in 2007, the Minister of Foreign Affairs in 2008, and finally serving as Vice Prime Minister until October 2012. She is also Associate Professor of Public International Law for the L.L.M program in International Law at Caucasian School of Law.