Chisinau – Return to Europe in Moldova 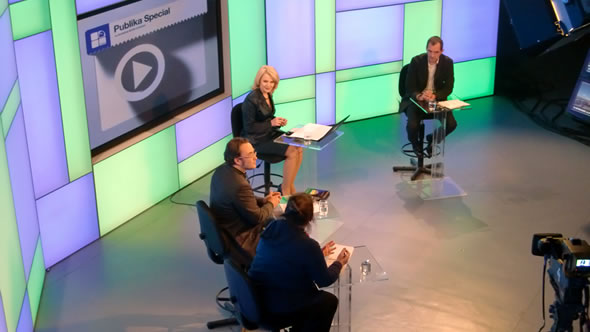 The award-winning documentary series "Return to Europe", based on ESI research and co-produced by ESI, has been translated into Romanian and is currently broadcast by Publika TV in Moldova. All ten films are broadcast between 18 December and 1 January. Earlier the series was already broadcast (in part or full) in Armenia, Austria, Bosnia & Herzegovina, Germany, Hungary, Macedonia, Montenegro, Poland, Romania, Switzerland and on the international news channel Aljazeera.

At the occasion of the launch of the series in Chisinau, ESI's Deputy Chairman Kristof Bender and Knut Neumayer, Programme Director Europe at the ERSTE Foundation on whose initiative the series were produced, were invited on 13 December to Țara lui Dogaru ("Dogaru's Country"), one of the major Moldovan TV talk shows. Knut and Kristof explained the idea behind the series, spoke about the changes in the Balkans portrayed and discussed the relevance of South East Europe's experience for Moldova.

Moldova was governed for nearly a decade by unreformed communists until 2009. A broad alliance of opposition parties forced them out of power after civil unrest following the April 2009 elections, leading to new elections in July 2009. The European ambitions of the new leadership under Prime Minister Vlat Filat have impressed many visitors. On 21 September 2010, UK Minister of State for Europe, David Lidington, stated:

"The view from London is very clear - whether you are looking at Moldova or whether you are looking at the Western Balkans or Turkey, we think that any country that is European, which wants to join the EU and which meets the accession criteria for the EU, should be able to move over time towards full membership of the EU … The prospect of full membership of the European family of nations should be there on the table for Moldova. And that is the case we will continue to argue very strongly."

Latest political developments, however, raised some questions regarding Moldova's future reform path. Because a government-instigated referendum on constitutional changes failed, early parliamentary elections were held on 28 November. The communists lost further but are still the strongest party with nearly 40 percent of the vote. They try to lure one of the governing parties into a coalition by making a very attractive offer, raising the stakes for outgoing Prime Minister Filat to keep his coalition together.

If the reform efforts continued, Moldova would make another fascinating example of EU-inspired change at the European periphery, particularly viewed against the post-soviet legacy. It would also make a highly interesting story for another documentary, an idea we are currently discussing with potential partners.