Next EU presidency: ESI Manual on Who is who in Budapest – 2010 revisited

One of the nice things about knowledge is that it increases for everybody once it is shared.

We have shared our reports since 1999. Thanks to our donors we are able to share online the 10 ESI Balkan documentaries "Return to Europe" as well – and since last weekend these are also all broadcast on Moldovan television (if you spend the holidays in Chisinau and speak Romanian we obviously recommend this).

One essential bit of knowledge we need as a think tank is who the people are in each country in Europe who have most influence on the policies we care about. For this purpose we started to produce ESI Who is who manuals. In 2010 so far another two new ESI manuals have been published: on the Belgian enlargement debate (July 2010) and on Turkish-Armenian relations (August 2010).

On the eve of Hungary assuming the EU presidency for the first time ever in early 2011 we are happy that, thanks to the support of Erste Foundation, we can offer our readers also a guide to this important and often little known European country:

One way in which sharing this knowledge increases our knowledge is if you provide feedback and information on what not to miss as we update and add new ESI manuals in 2011. We look forward to hearing from you.

The art of (not) reading

As another year comes to an end, it is sobering to reflect how many books we have purchased but will be unable to read; how many interesting reports are in our inbox which we are unable to absorb.

We are the sum of the books we read, talk about and forgot; Pierre Bayard calls this our "inner libraries." At the same time, as Bayard famously noted, the infinity of available texts can also be an argument not to read at all, all the more so because,

"it's totally possible to carry on an engaging conversation about a book you haven't read – including, and perhaps especially, with someone else who hasn't read it either."

All the more reason to thank all of you who have given us their time in 2010:

In our part of the world, Europe's Greater South East, 2010 has not been an altogether bad year:

Of course, from the Greek-Macedonian border to the Turkish-Armenian one, from Azerbaijan to Kosovo, from Berlin to Diyarbakir, enormous challenges to open societies in Europe remain in place. Thanks to our main donors – at this moment Bosch Stiftung, Erste Stiftung, Open Society Foundation and the government of Sweden – we hope to contribute to these debates also in 2011.

In the meantime the whole ESI team wishes you Merry Christmas, happy holidays and a prosperous and happy New Year! 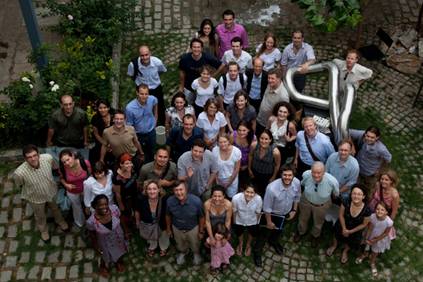