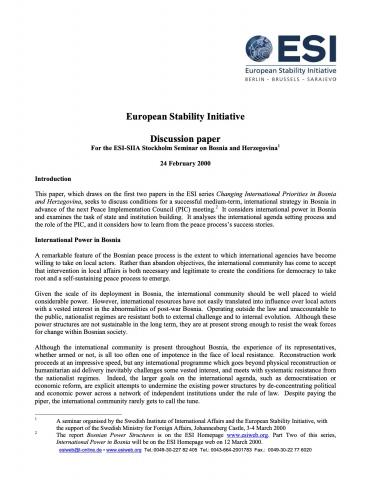 This paper, which draws on the first two papers in the ESI series Changing International Priorities in Bosnia and Herzegovina, seeks to discuss conditions for a successful medium-term, international strategy in Bosnia in advance of the next Peace Implementation Council (PIC) meeting. It considers international power in Bosnia and examines the task of state and institution building. It analyses the international agenda setting process and the role of the PIC, and it considers how to learn from the peace process's success stories. 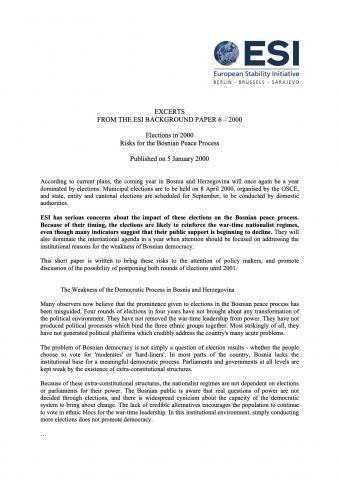 Elections In 2000 Risks For The Bosnian Peace Process

According to current plans, the coming year in Bosnia and Herzegovina will once again be a year dominated by elections. Municipal elections are to be held on 8 April 2000, organised by the OSCE, and state, entity and cantonal elections are scheduled for September, to be conducted by domestic authorities. ESI has serious concerns about the impact of these elections on the Bosnian peace process. Because of their timing, the elections are likely to reinforce the war-time nationalist regimes, even though many indicators suggest that their public support is beginning to decline. They will also dominate the international agenda in a year when attention should be focused on addressing the institutional reasons for the weakness of Bosnian democracy. This short paper is written to bring these risks to the attention of policy makers, and promote discussion of the possibility of postponing both rounds of elections until 2001. 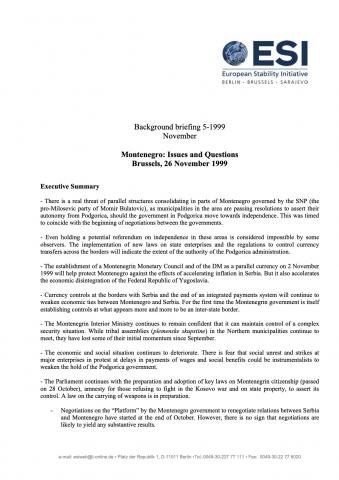 As municipalities are passing resolutions to assert their autonomy from Podgorica, a real threat of parallel structures consolidating in parts of Montenegro prevails. The extent of authority of the Podgorica administration is being challenged, even holding a referendum on independence in these areas is considered impossible by some observers. The Montenegrin Interior Ministry continues to remain confident that it can maintain control of a complex security situation. 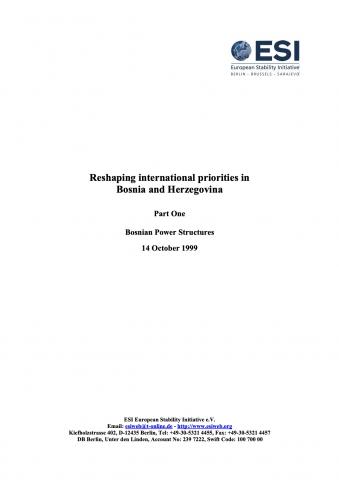 Until now, the evolution of international power in Bosnia has occurred haphazardly, in response to events on the ground rather than according to a strategic vision. If international support is withdrawn in the absence of self-sustaining domestic structures, the peace process may falter, and many of the gains made to date will be lost. The concept of "ownership" of the Bosnian peace process raises an obvious question: to which individuals or local institutions should "ownership" be entrusted? 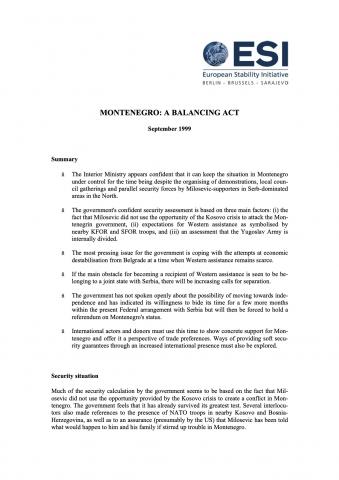 Opposition figures warn of special protection forces and organized gatherings and tribal council meetings in the Serb-majority areas in the North of Montenegro. The financial support given to Montenegro by the international community is claimed to be less than Milosevic's support to the SNP. Conversely, if the main obstacle for becoming a recipient of Western assistance is seen to be belonging to a joint state with Serbia (e.g. World Bank policy), there will be increasing calls for separation. 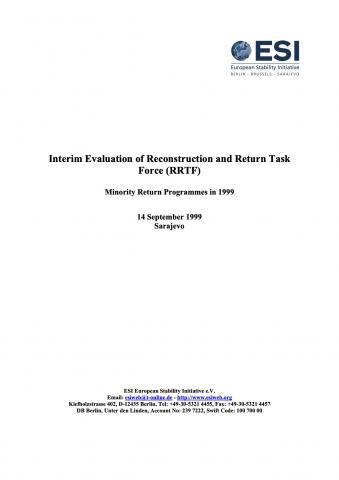 Assisting displaced Bosnians return to their homes in areas controlled by the military of another ethnic group, so-called minority returns, has proved one of the most difficult challenges of the peace process. In the face of systematic obstructionism by local power brokers, the Office of the High Representative (OHR) and the office of the United Nations High Commissioner for Refugees (UNHCR) formed in January 1997 the Return and Reconstruction Task Force (RRTF) as an inter-agency forum to co-ordinate international efforts to this end. The RRTF brings together all agencies working on return-related issues. Following the adoption of the 1999 RRTF Action Plan, the RRTF is today managed by a secretariat within the OHR with 12 employees, with a field network of a further 25 international staff -- hired for their local expertise -- working from 6 regional and 7 field offices. 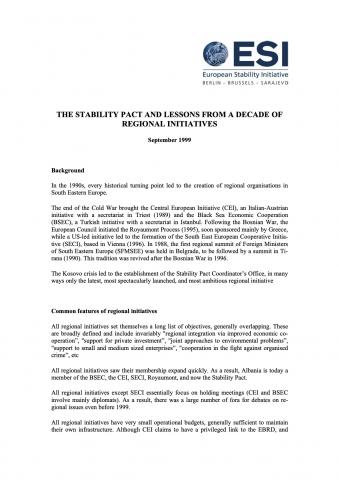 The Stability Pact And Lessons From A Decade Of Regional Initiatives

In the 1990s, every historical turning point led to the creation of regional organisations in South Eastern Europe. The end of the Cold War brought the Central European Initiative (CEI), an Italian-Austrian initiative with a secretariat in Triest (1989) and the Black Sea Economic Cooperation (BSEC), a Turkish initiative with a secretariat in Istanbul. Following the Bosnian War, the European Council initiated the Royaumont Process (1995), soon sponsored mainly by Greece, while a US-led initiative led to the formation of the South East European Cooperative Initiative (SECI), based in Vienna (1996). In 1988, the first regional summit of Foreign Ministers of South Eastern Europe (SFMSEE) was held in Belgrade, to be followed by a summit in Tirana (1990). This tradition was revived after the Bosnian War in 1996. The Kosovo crisis led to the establishment of the Stability Pact Coordinator's Office, in many ways only the latest, most spectacularly launched, and most ambitious regional initiative.