Expelling Oceania – The Council of Europe and Russian aggression

This week the member states of the Council of Europe must move to expel Russia from their organisation. Tomorrow the Committee of Ministers will discuss Russia in Strasbourg.

The Council of Europe must not harbour a dictatorship that is invading a neighbouring state, committing massive war-crimes, while suppressing the human rights of its own citizens to hide its aggressive war from its public. And yet, as this historic vote approaches some member states are reportedly still uncertain how to vote.

It would be a devastating signal to suggest to the current Russian leadership that the developments of the past two weeks leave European democracies uncertain about whether Russia has foregone its place in their club. This would certainly be understood as a hint that some in Europe are looking forward to a moment soon when current tensions might be patched up, as they always were in recent years.

This time the reaction must be different.

On Monday, 21 February 2022, Russian president Vladimir Putin gave a chilling speech. He declared that Ukrainian identity is a fraud. “Modern Ukraine was entirely created by Bolshevik Russia.” He was “ready to show you what real decommunisation means for Ukraine.” Putin thus threatened to destroy Ukrainian statehood by force of arms.

On Wednesday, 23 February, ESI called on the Committee of Ministers to suspend Russia’s membership in the Council of Europe in response to these threats, in line with its Statute. We argued that Putin had (long ago) declared war on the principles enshrined in the European Convention on Human Rights:

ESI newsletter
Suspend Russia! The Council of Europe and the new cold war

In the early hours of Thursday, 24 February, Russia declared war on Ukraine and launched its attack. One day later, on Friday, 25 February, the 47 member states of the Council of Europe voted to suspend Russian membership. The result of their vote was clear:

The statement added, however, that this “suspension is not a final measure but a temporary one, leaving channels of communication open.” All this happened before the extent of Russia’s war of aggression had become apparent.

The expulsion of Russia requires a two-thirds majority of votes cast by the 47 member states. Formally, the decision, which one or more member states must propose, takes the form of a request to withdraw. Were Russia to decline to do so, the Committee of Ministers can decide to terminate its membership at a date of its choosing.

The Committee of Ministers should decide to formally consult the Assembly on Russia’s expulsion at this meeting. It should then move immediately to invite Russia to withdraw. 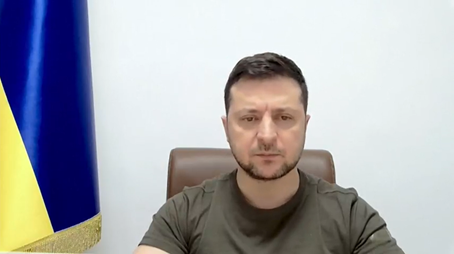 Volodymyr Zelensky addressing the joint Houses of Parliament in London

On Tuesday, 8 March, Ukrainian president Volodymyr Zelensky addressed the joint Houses of Parliament in London. He summed up developments since the war against his country began:

Thirteen days of this struggle, on day one at four o’clock in the morning we were attacked by cruise missiles. Everybody woke up and people with children, the entire Ukraine, and since that we have not been sleeping. We have all been fighting for our country, with our army.

On day two we have been fighting air strikes and our heroic military servicemen on the islands have been trying to fight – when Russian forces demanded that we lay down arms, however, we continued to fight and we did feel the force of our people that opposed the occupiers until the end. The next day the artillery started fighting us. Our army showed us who we are.

On day four we started getting people captive, we have not been torturing them, we remain humane even on day four of this terrible war.

On day five the terror against us was going on against children, against cities and constant shelling has been taking place around the country, including hospitals, and that didn’t break us, and that gave us feeling of big truth.

On day six, Russian rockets fell on Babi Yar – the place where the Nazis killed thousands of people during the Second World War – and 80 years later, the Russians hit at them for the second time, and even churches are getting destroyed by shelling.

On day eight, we have seen Russian tanks hitting the atomic power station and everybody got to understand that this is terror against everyone.

On day nine, there was a meeting of Nato without the result we were looking for. Yes, we did feel that unfortunately the alliances don’t always work properly, and the no-fly zone cannot be enforced.

On day 10, Ukrainians started protesting and stopping the armoured vehicles with their own hands.

On day 11, children and cities were being hit and hospitals as well with the rockets and constant shelling, and on that day, we realised that Ukrainians became heroes, entire cities, children, adults.

On day 12, the losses of the Russian army exceeded 10,000 people killed, including a general, and that gave us hope that there will be some kind of responsibility for those people in a court of law.

On day 13, in the city of Mariupol that was attacked by Russian forces a child was killed. They do not allow any food, any water and people started panicking.

I think everybody can hear that people do not have water over 13 days of this situation, over 50 children have been killed. These are the children that could have lived but these people have taken them away from us.”

Russia as Oceania – descent into darkness 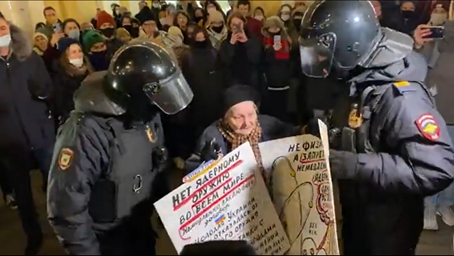 At the same time, the last vestiges of independent media and freedom of assembly inside Russia disappeared. The New York Times noted:

“As Mr. Putin has waged war on Ukraine, a digital barricade went up between Russia and the world. Both Russian authorities and multinational internet companies built the wall with breathtaking speed. And the moves have ruptured an open internet that was once seen as helping to integrate Russia into the global community.

… Facebook has been blocked. Twitter has been partly blocked, and YouTube’s future is in doubt. Apple, Samsung, Microsoft, Oracle, Cisco and others have pulled back or withdrawn entirely from Russia …

The actions have turned Russia into a walled-off digital state akin to China and Iran, which tightly control the internet and censor foreign websites and dissent. China’s internet and the Western internet have become almost completely separate over the years, with few overlapping services and little direct communication. In Iran, the authorities have used internet blackouts during protests.”

With these steps came draconian penalties for any criticism of the conduct of Putin’s war. On 4 March, Russian lawmakers approved the criminalisation of spreading “false news” about the army. The penalty for this was raised to up to 15 years in prison.

There have been thousands of arrests across Russia in recent weeks:

“The police reported more than 3,000 arrests across the country — the highest nationwide total officially reported in any single day of protest in recent memory. An activist group that tracks arrests, OVD-Info, reported detentions in 49 different Russian cities.”

Alas, none of this repression is surprising. The prosecution of the respected human rights NGO Memorial and of any political opposition has been intensifying long before the invasion of Ukraine.

In December 2021, courts agreed with prosecutors that both Memorial International and its Human Rights Centre should be liquidated as “foreign agents”. Russian prosecutors had charged that:

“the activities of Memorial are, in fact, largely aimed at falsifying the history of our country, at gradually reformatting the mass consciousness of the population from the memory of the victors to the need for repentance for the Soviet past.”

“It is obvious that Memorial, having capitalized on the theme of political repressions in the 20th century, has created a [deliberately] false image of the Soviet Union as a terrorist state…Why should we have to be ashamed of and repent our allegedly hopeless past instead of having pride in a country that had won a terrible war and liberated the world from fascism?”

In hindsight it is easy to see this as part of the wider ideological mobilisation accompanying Putin’s war of conquest. Freedom of assembly, freedom of information, freedom of speech: today, there is no longer any meaningful difference between Russia and the Soviet Union or today’s China and Iran. Russia is turning back into the totalitarian dictatorship of the pre-Perestroika, pre-Gorbachev days of the early 1980s. 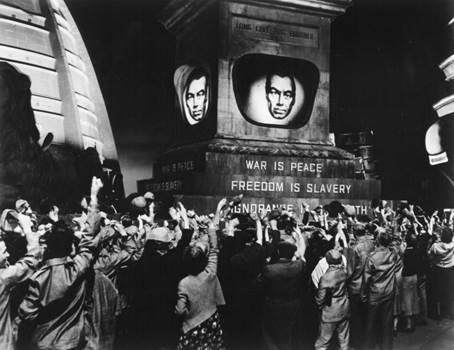 The world of George Orwell's 1984:
War is Peace
Freedom is Slavery
Ignorance is Strength

In fact, Putin’s Russia is increasingly indistinguishable from George Orwell’s Oceania: a place of torture and repression, in permanent war with other powers to legitimize itself, ruled by a Party that employs a Thought Police to prosecute independent thinking, all in the name of its dictatorial leader. Could Oceania remain a member of the Council of Europe and the latter retain its credibility? 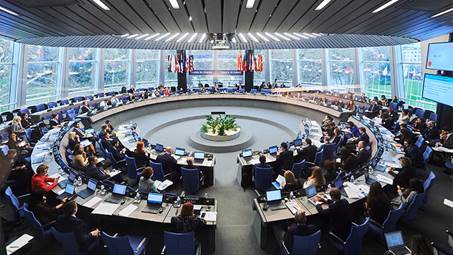 Committee of ministers in Strasbourg

Following the suspension of Russia on 25 February, Pyotr Tolstoy, the head of the Russian delegation to PACE, explained on his telegram channel that the Council of Europe was impossible without Russia. Tolstoy also hinted that Russia was prepared to remain a member, waiting for the Council of Europe to revisit its decision:

“Now the resumption of our conversation will depend on the Council of Europe. We Russians are not going to change.” 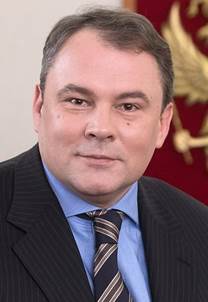 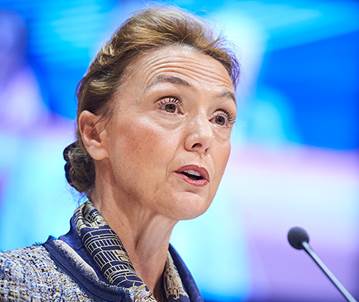 Tolstoy then repeated the lies that justified the Russian invasion of Ukraine:

“Until the last moment, we tried to convey our position: the genocide of Russians in Ukraine lasted for eight years, civilians died in the Donbass, families were forbidden education and the opportunity to speak Russian.”

On 4 March, Marija Pejcinovic Buric, the secretary general of the Council of Europe, called

“on the Russian authorities to immediately and unconditionally cease hostilities and to return to diplomacy and dialogue … But if this isn’t the case, the Committee of Ministers and the Parliamentary Assembly will move forward, in the direction of an expulsion.”

On 8 March, Council of Europe leaders made a joint statement on Russia. It also called

“on the Russian Federation to immediately and unconditionally cease its military operations in Ukraine.”

“to refrain from military attacks against civilians and civilian objects, to ensure the safety of medical establishments, personnel and emergency vehicles, to ensure unimpeded access of the civilian population to safe evacuation routes, healthcare, food and other essential supplies, as well as to ensure rapid and unconstrained passage of humanitarian aid and movement of humanitarian workers.”

“to comply with the principles and values of democracy, human rights and the rule of law which our Organisation represents on its own soil.”

The statement ended with a warning. The Council of Europe would “follow the situation closely and remain committed to taking further measures.”

Some fear that Russia’s expulsion from the Council of Europe would strip Russians of the protection of the European Court of Human Rights (ECtHR).

In fact, already today citizens challenging the regime are not getting any protection. It would be absurd to assume that under current conditions the abysmal implementation record of ECtHR judgements would be anything but worse. The continued detention of Alexey Navalny is clear evidence of this.

Expulsion of the Russian state must mean more, not less, focus on Russian human rights defenders. There have been dissidents in Russia before it joined the Council of Europe.

Some fear that Russia’s expulsion would mark a definitive rupture. This is wrong. The day Russia becomes a democracy again it should be welcomed back with open arms. This is what happened to Greece after the fall of its military junta.

Today, alas, this is a distant vision. Today, Russia must be expelled for there to be a credible Council of Europe at all, to which a different Russia might one day return. 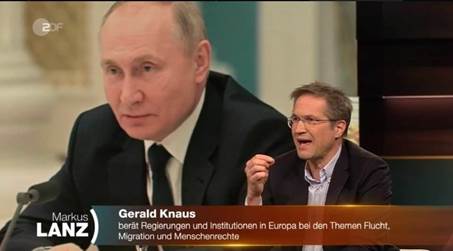 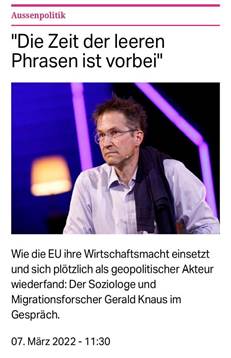 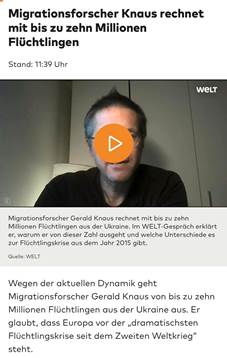 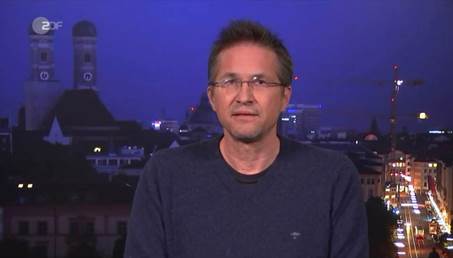