The fight against Corona: Evacuate the Greek Islands – Now! 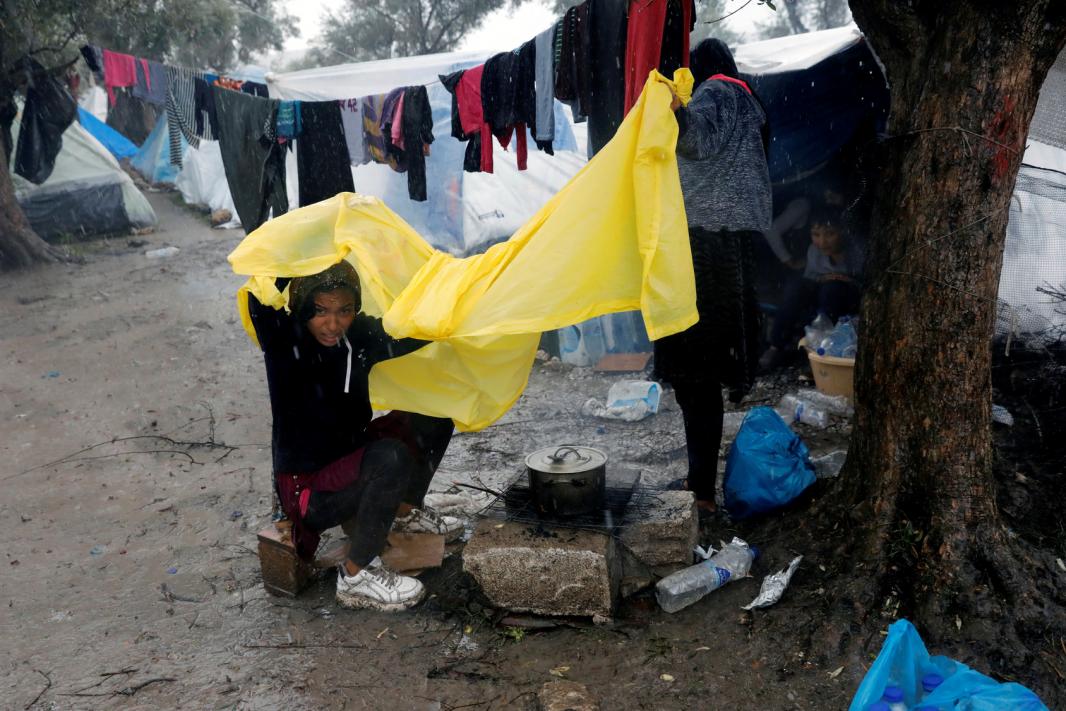 A girl tries to protect herself from the rain at a makeshift camp for refugees and migrants next to the Moria camp during a rainfall, on the island of Lesbos

Crises trigger crises.  Not all of them are foreseeable, but some are.  One, just waiting to happen, is brewing on the Greek islands.  Over 40,000 refugees and migrants are stranded in overflowing, poorly sanitised reception facilities.  There is a lack of water, doctors and supplies.  Coronavirus is coming and – impossible to contain in such claustrophobic conditions – it will spread panic and death in equal measure.  There were violent riots on the islands just a few weeks ago.

All this is predictable, but it is not inevitable. Greece must move first and its state aim of evacuating the islands.  But other European countries, including Germany, will need to help.

Three things have to happen. First, the migrant population on the islands needs to be brought down to a manageable number.  Officially, there is capacity for about 9,000 migrants in reception facilities on the islands.  The real number that can be accommodated safely, in times of social distancing, is less. As the Greek asylum system has stopped working and returns to Turkey are in any case impossible for the foreseeable future, there are only two places where these asylum-seekers can go: the Greek mainland and other European countries.

The European Stability Initiative recently published a plan setting out how this could be done. 35,000 migrants need to be evacuated to the mainland as soon as possible. The IOM is currently constructing three camps capable of housing a few thousand migrants.  Five more temporary camps could house another 10,000 migrants. The IOM thinks these could be completed in less than two weeks. Another 10,000 people could be accommodated in empty hotels on the mainland. Given the collapse of tourism, this is a feasible temporary solution. There is European funding for this. Around 7,000 refugees and asylum seekers are already accommodated in hotels in Greece.

Second, some EU states should offer to relocate 10,000 recognised refugees from the Greek mainland immediately. There are currently 4,000 recognised refugees living in camps on the mainland, and a further 6,000 in UNHCR rented accommodation. These places could be freed within a few days and create space for families from the islands. These are people who have already been found to need protection. Their identity is known. The IOM is ready to help Germany – and others – to organise this. If three German states were prepared to accommodate 1,000 recognized refugees in existing facilities, it would be possible to bring 5,000 to Germany. This is doable: in the past few days the German government has brought 140,000 Germans home from all over the world. And if other countries were willing to participate, Greece would be encouraged. It is not just viruses that are contagious. Solidarity can be too.

Third, there is an urgent need for a new agreement with Turkey. The EU erred in failing to reassure Turkey that it will extend its financial commitment beyond the current 6 billion Euros for Syrian refugees, all of which was committed by the end of 2019. It should do this now and offer Turkey a new 6-billion-euro package for the next few years.

The EU and Greece can only reduce irregular migration across the Aegean in cooperation with Turkey. European support for the many millions of refugees in the country - a larger population than Berlin - is also in the EU's interest. This means investment in education, access to healthcare and social assistance; and support to the regions where they are located.

The EU could also open these programs to other people in need in these communities, including Turks. The successful integration of Syrian refugees, 99.5 percent of whom stayed in Turkey last year, is is good for Syrians, good for Turkey and good for the EU.

The humanitarian crisis on the islands in recent years must also be addressed. Once this crisis is over member states should help Greece establish quick and fair asylum proceedings on the islands that allow it to move people from the islands within weeks. A new cut-off date needs to be agreed with Turkey, after which Greece should speedily return anyone who does not need protection in the EU.  The fundamental right to apply for asylum – and get it if it cannot be secured elsewhere - must be restored.  The EU should also deliver on its forgotten commitment in the 2016 EU Turkey statement to resettle larger numbers of refugees from Turkey once the current crisis passes.

If all this is done, an impending public health and public order disaster can be avoided. But there is even more stake: preserving our humanity, showing real solidarity with Greece, protecting European citizens, stabilizing our borders, and preserving the Refugee Convention at time of enormous pressure. In the two decades before 1951, Europeans repeatedly failed to protect those in need of refuge - those who fleeing from the Third Reich or later from the Soviet Union. That's why the Refugee Convention was adopted. It must not be allowed to drown in the Aegean in 2020.

Crises trigger crises. But they also create heroes and stories long told. In 1942, Danes and Swedes brought 7,000 Danish Jews to safety in boats across the Baltic just in time to avoid a disaster. Today the enemy is not an occupation army, but an invisible virus. How Europeans, Greeks and Germans respond today will tell future generations a lot: not about who we want to be, but who we really are.