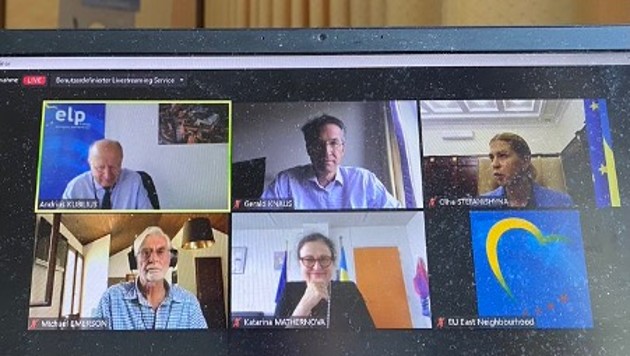 ESI’s Gerald Knaus was invited to participate in an online debate on the EU membership perspective for Ukraine, organised by Andrius Kubilius (Member of the European Parliament and former Prime Minister of Lithuania).

The debated focused on Ukraine’s application for EU membership and its integration Ukraine into the European single market. The panellists also discussed how to avoid the risks of dragging the process to an impasse as in the Western Balkans. Gerald warned that faced with Russian aggression this must not happen with Ukraine and that both the Western Balkans and Ukraine need to be offered the four freedoms and a renewed and credible accession path.

Gerald debated with Olha Stefanishyna (Deputy Prime Minister for European and Euro-Atlantic Integration), Igor Zhovkva (Deputy Head of the Office of the President of Ukraine), Ivanna Klympush-Tsintsadze (Chair of the Parliamentary Committee on Integration of Ukraine to the EU), Simon Mordue (Chief Foreign Policy Advisor to the President of the European Council) and Michael Emerson (Associate Senior Research Fellow, CEPS).

The panel was moderated by Andrius Kubilius.