Warsaw – ESI at meetings on the rule of law 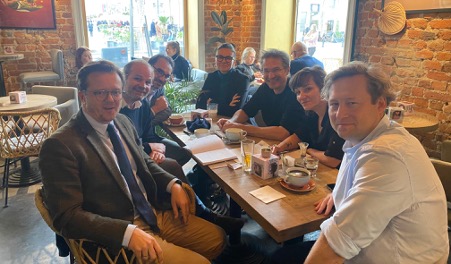 ESI’s Gerald Knaus, John Dalhuisen, and Magdalena Milenkovska met with several Polish civil society organisations. At a meeting with Olaf Osica (advisor to the president of Warsaw), and Magorzata Szuleka and Maciej Nowicki from Helsinki Foundation they discussed the situation of the Ukrainian refugees in Poland.

Together with Piotr Buras from the ECFR office in Warsaw, they also met with members of the Free Courts initiative and the former deputy Ombudsman for Human Rights, Maciej Taborowski. They discussed the steps needed to restore the independence of the judiciary in Poland.

Gerald also spoke to the representative of the Eastern Europe department in the Polish MFA to discuss how to convince other EU member states to increase their support for Ukraine.

At a dinner with Polish MPs, senators, and civil society organisations, ESI’s team learned more on the rapidly changing political situation in Poland.