ESI in Moldova: Visa-free travel is in reach

Form 29 April to 2 May 2010, an ESI team visited Moldova to discuss with Moldovan officials and civil society the country's prospects for visa-free travel with the EU. They met with Prime Minister Vlad Filat, Foreign Minister Iurie Leanca and the head of the Border Guard Service Alexei Roibu, among many other officials. ESI's most important message to Moldovans was that visa-free travel will require far-reaching reforms, which, however, can be accomplished and should lead to the abolition of the Schengen visa requirement.

The ESI team was made up of ESI Chairperson Gerald Knaus, ESI Senior Analyst Alexandra Stiglmayer and Ivica Bocevski, former Macedonian Deputy Prime Minister who was in charge of the visa liberalisation process for Macedonia. Ivica Bocevski spoke about the activities that Macedonia undertook to qualify for visa-free travel with the EU, sharing the Western Balkans experience with Moldova.

The ESI team also had meetings with the senior officials from other ministries and EUBAM (European Union Border Assistance Mission). The team briefed an inter-institutional task force dealing with various aspects relevant for the visa issue, and talked to representatives of various think-tanks and NGOs.

With the Border Guard Service, ESI visited the border crossing point Leusani towards Romania. The ESI team also went to a customs point near Vadul-lui-Voda towards the break-away region of Transnistria.

In the framework of the "Eastern Partnership", the EU has promised its six Eastern partner countries – Moldova, Ukraine, Georgia, Armenia, Azerbaijan and Belarus – visa liberalisation. In Moldova, visa facilitation and readmission agreements, which are a precondition for a visa liberalisation process, entered into force in January 2008. In June 2010, the European Commission intends to open a visa dialogue with Moldova. As part of this dialogue, it plans to present to Moldova a visa roadmap that will set out the conditions that the country needs to meet to be granted visa-free travel with the EU. 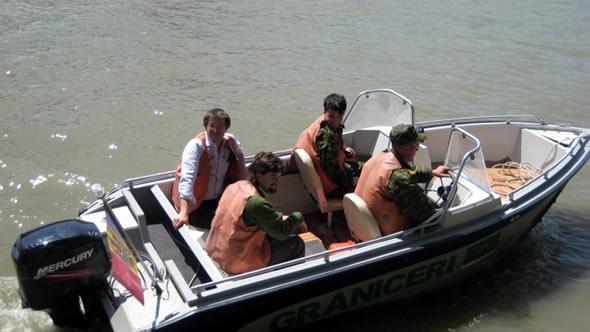 The Moldovan Border Guards Service took ESI on a boat trip on the river Prut between Moldova and Romania. Photo: ESI
Please enter your search term