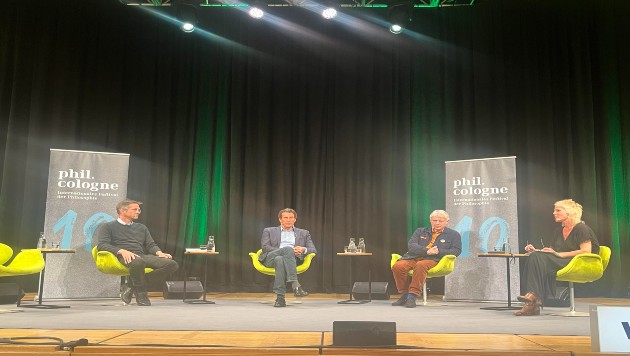 ESI’s Gerald Knaus was invited to participate in the Philosophy Festival Cologne at a debate on “Turning point. Germany and the war” organised by phil.cologne.

Gerald spoke about the European fears sparked by the Russian invasion, the fear of Ukrainian refugees and the fear of neighbouring countries, such as Moldova, about further Russian aggression.

Gerald added that not all of Europe is experiencing the same fear as Western Europe has lived in peace since 1945 while Central and Eastern have seen more than 20 armed conflicts since.

He argued that the turning point consisted in resolutely defending the vision of 1990 – a Europe of democracies based on human rights. Russian President Vladimir Putin’s narrative is that the Europe created after 1990 will not last. In his imagination there are only great powers and spheres of influence. An entity like the European Union, in which small states and large states live together peacefully, embedded in structures without an imperial centre, is, in Putin’s eyes, an absurdity, a fata morgana. That’s why he has set out to destroy the EU.

Gerald stressed the danger of the colonialist narrative that Putin’s Russia is using to justify the invasion of Ukraine and that Europe must send a clear signal now:

"We want the Ukrainian democracy as a European ally. With the perspective that at some point a democratic Russia can also join in.”

Gerald debated with Gerd Koenen (German Historian and Publicist) and Julian Nida-Rümelin (Philosophy and Political Theory Professor at the Ludwig Maximilians University in Munich and former Minister of State for Culture and Media). The panel was moderated by Svenja Flasspöhler (Editor-in-chief of the Philosophie Magazine).