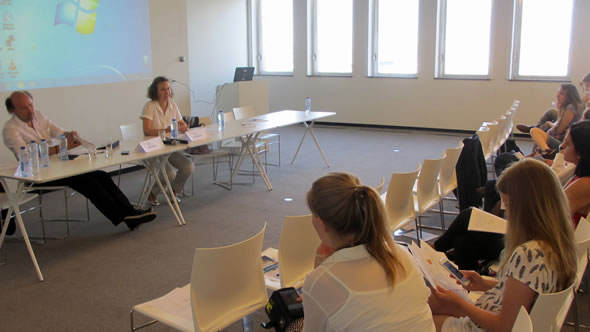 ESI Senior Analyst Alexandra Stiglmayer discussed the topics of how to improve the enlargement methodology and how to revive the accession process with Turkey with a group of 25 students from across Europe. They were in Brussels for a two-day seminar called "Challenges of the European Union", which was organised by the Finnish think-tank Magma and the European Liberal Forum.

Alexandra mentioned the difficulties that EU enlargement faces – low public support in Europe and decreasing interest by EU leaders – but stressed that an effective enlargement process remained very important. For the Western Balkans, EU accession remains the best option in order to create stability and to develop their economies, and it enjoys broad support by their citizens. For the same reasons, the EU should have an interest to bring the countries in the region into shape swiftly. Alexandra presented ideas how the enlargement process could be re-energised. This would require a clearer and more transparent approach by the European Commission. The Commission should elaborate the key requirements under each of the 34 chapters into which the body of EU law – the acquis – is divided in. It should also draw up and publicise the criteria that is uses to assess progress under each key requirement. It should then measure and describe progress in all the candidate countries by the same yardstick, so that the countries can be compared with each other. Besides, she said, the way in which progress reports are written must become more understandable to a wider audience.

This new approach would foster healthy competition, represent concrete feedback for the civil servants working on implementing different aspects of the acquis, and turn the accession process in the genuinely merit-based exercise. It would also make it easier for stakeholders – NGOs working on some aspects such as the environment, or potential investors interested in food safety standards or public procurement – to gain an idea about the state of affairs in each country.

Alexandra said chapter 18 (statistics) should be among the first chapters to be implemented in the Western Balkan countries and would therefore benefit from the new methodology. She explained that reliable statistics are the basis of sound economic policies, which the Balkans urgently need. She referred to the example of Greece where weak statistics stood at the beginning of the recent crisis. This crisis started in late 2009 when the Greek government revised the government deficit for 2008 from 5 to 7.7 percent of GDP, and the planned deficit for 2009 from 3.7 to 12.5 percent of GDP. Other important chapters to be tackled first, according to Alexandra, are public procurement (chapter 5), food safety (chapter 12) and financial control (chapter 32).

The students showed keen interest in the topic and then moved the discussion to Turkey where the accession process has almost stopped. Together with Alexandra, they discussed the reasons for the slowdown and EU-Turkey relations in general. Alexandra mentioned the visa liberalisation process, which was a chance to improve relations and had become more important as a result of increasing numbers of migrants who reach the EU illegally via the Turkey-Greece sea migration route.