Sarajevo – Interview with Gerald Knaus in Dnevni Avaz: "It won’t be Bosnia's fault if visas are re-imposed" 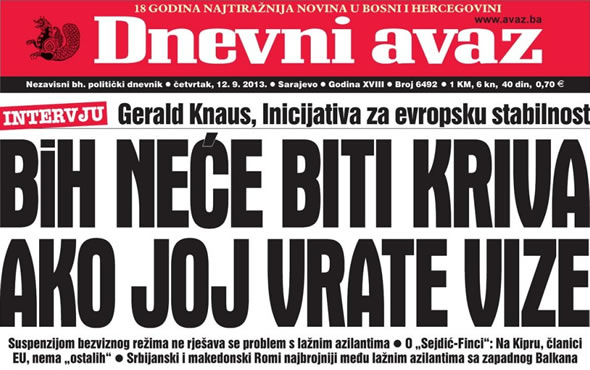 S.N.: According to you Mr. Knaus, what is the EU's policy towards Bosnia and Herzegovina?

G.K.: There is something about the EU's policy that concerns me. We have seen that even before. The EU demands something from Bosnia which it does not demand – and which could not be demanded - from anyone else. BiH has plenty of problems; a lot of reforms must be carried out, many things are bad, in particular politics. Yet, if conditions for Bosnia's integration into the EU are put wrongly, then the result is – blockage! At the moment, there is standstill in Bosnia due to the EU's demand that Bosnia comply with the decision "Sejdić and Finci vs. BiH" of the European Court of Human Rights. However, at the same time, there is a EU member state, which has become a member state without any problems, with constitutional provisions that are much worse than in BiH.

S.N.: Which is this EU member state?

G.K.: It is Cyprus! The Cypriot Constitution envisages that only Greeks and Turks can be elected for public office. There are no 'Others'. If you are an Italian, for example, and assume the Cypriot citizenship, you have three months to make a choice – whether you are Greek or Turk. There is no third option! Not only are these provisions in effect, but during the negotiations about Cyprus they were added to the Annan Plan, which at that time was widely praised by the EU.

And now someone claims that Bosnia has "a racist constitution", but the whole EU, the UN, all of them were begging the Cypriot authorities to accept something which is much worse than the provisions of the BiH Constitution.

S.N.: Yet, the European Court made this ruling in the case of Bosnia…

G.K.: Yes, of course. What is the essence of this decision? They found that Bosnia's provisions on the elections of the members of the Presidency violates Protocol 12 of the European Convention on Human Rights, which Bosnia accepted in good faith. At the same time, 20 out of 28 member states have not ratified this Protocol! And now the EU puts forward as the condition of all conditions something that the vast majority of EU member states have not accepted!

Bosnia is not a laboratory

(G.K.:) If you remember, at a point in time the EU tried to carry out a police reform. They claimed that Bosnia had to implement reforms in line with EU standards, although that was not correct. You all remember all the problems that Bosnia had during that period. Eventually, three years were lost and in the end the EU withdrew the demand.

What additionally triggers my attention is the behavior of officials of the international community in Bosnia. For them, it would be easier and better to work in Bosnia if they had an attitude based on which they would say – Yes, the Decision of the Strasbourg Court has to be implemented and can be implemented, but this cannot be the condition of all conditions because in the EU we have even worse constitutions! And then they should help the BiH authorities, explain, suggest… In this way, it would be easier to carry out the required work and the results would be better.

Turkey and Montenegro have already been screened by the European Commission, and they open chapter by chapter. Serbia will soon start this process. Albania is expected to continue the EU integration process, Kosovo is beginning this process. Leaving Bosnia to hang and dry because of something that the vast majority of EU member states does not respect is absurd!