Berlin – Presentations and meetings on the Syrian refugee crisis 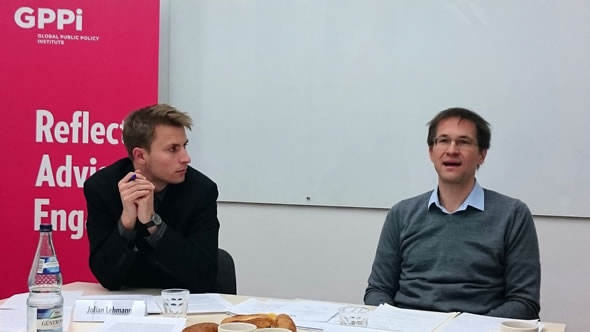 ESI's Gerald Knaus presented ESI's proposal for the solution of the refugee crisis at an early morning briefing organised by the Global Public Policy Institute (GPPi). Gerald argued that most debates on this issue never get to the real issues, but remain stuck at the level of illusions, and that an agreement between Germany and Turkey and possibly other countries affected by the refugee crisis is key for a pragmatic approach.

While in Berlin, Gerald had several meetings with high level officials in the German Foreign Ministry, as well as with the Turkish and Swedish ambassadors. He also gave an Interview to Deutsche Welle on the German-Turkish government consultations on Friday.