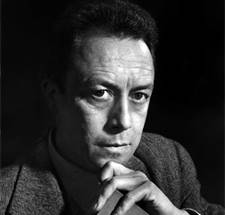 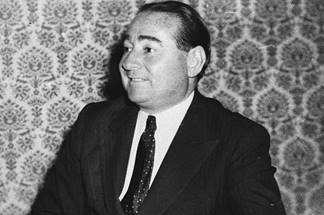 What is the future of the EU-Turkey relationship? In two new ESI papers we suggest how to reform a dysfunctional accession process; and when to bring it to an end. We seek to dispel illusions, restore clarity and propose ways how the European Union and the Council of Europe might better protect fundamental human rights.

In his essay "Reflections on the Guillotine" in 1957 French writer Albert Camus takes an uncompromising position against the death penalty, writing that: "A man is destroyed by the wait for death long before he really dies." At the time Camus' native French Algeria was in the throes of a ferocious conflict.

Routine torture, summary executions of captured prisoners, mass internment and the use of the death penalty characterised the French counter-insurgency strategy. Military tribunals in French Algeria rendered almost 1,500 death sentences between 1954 and 1962. Of these, 198 were carried out. After 1957 all lawyers who used to defend Algerian rebels were arrested or put under house arrest; several were suspended, two murdered.

When the European Convention on Human Rights was adopted in Rome in 1950, it explicitly recognised the legality of capital punishment. It did not limit the crimes which could be punished in this way. This created a huge gap for human rights protection, which had terrible consequences. In 1957, the year Camus wrote his essay, Evaghoras Pallikarides, aged 19, was hanged in the British Crown Colony Cyprus. "The offence for which he was executed was that of possessing a weapon. It was a light machine gun, and it was not in a serviceable condition at the time he was apprehended." This was not an isolated incident. The UK had proclaimed a state of emergency in Cyprus in November 1955, resorted to mass detention without trial, vastly extended the use of the death penalty, imposed draconian censorship laws and enacted extensive powers to requisition property.

Cyprus did not remain under British control, and spiralled into further violence soon. France lost Algeria and left behind untold bitterness. The recent history of European powers dealing with colonial insurgencies is a record of immense human rights abuses and abysmal policy failures. It is a reminder of how tempting it has been, even for democratic leaders faced with violence, to resort to repression, intimidation and the use of extreme measures. And how badly this has ended. 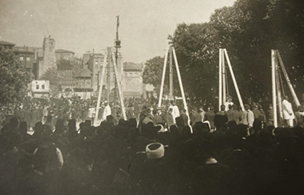 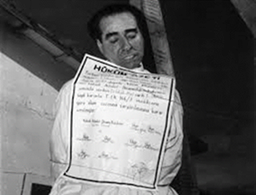 The death penalty in Turkey is as old as the Republic itself. It existed under the one-party regime of the 20s and 30s; during Turkey's first parliamentary democracy in the 1950s; and following each military intervention, in 1960, 1971 and 1980. Between 1920 and 1984, 712 people were executed. In 1957 there was still a public hanging in Sultanahmet Square, next to Hagia Sophia Museum. 1960 Turkey carried out its last public execution in Istanbul.

For almost a year now, Turkish president Recep Tayyip Erdogan has vowed, in speech after speech, that he is ready to restore the death penalty. Some have dismissed this as political theatre. And yet, Turkey would not be the first country to reintroduce the death penalty after it had fallen out of use. The Kingdom of Italy abolished the death penalty for civilians in 1889, only to see it reintroduced by Mussolini in 1930. The United States did not carry out any executions between 1968 and 1980. Human rights progress is never irreversible. The days are gone when elephants were used to crush heads in India. And yet, states continue to behead (Saudi Arabia), hang (Egypt, Iran), shoot (Belarus, China) and inject deadly substances (United States, Vietnam).

Turkey abolished the death penalty in response to European Union conditionality after it received candidate status in 1999. In the years since then, accession negotiations and EU-Turkey relations have fallen into deep crisis. The question is what happens now, and how the EU should react if Turkey made capital punishment legal once again.

The case for hanging 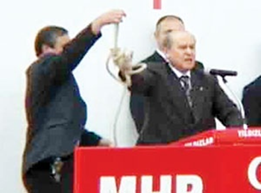 Devlet Bahceli, the elderly leader of the Nationalist Action Party (Milliyetci Hareket Partisi, MHP) and former deputy prime minister has been the most outspoken and consistent defender of capital punishment in Turkey for decades. During the general election campaign in 2007, he threw a noose into a howling crowd at a rally in Erzurum: "You [Erdogan] govern alone. You have the power. Why haven't you hung him [PKK leader Abdullah Ocalan] yet? … Do you really lack the money to even buy a simple noose? Take this, and hang him!"

In 2012, he stated: "The Nationalist Action Party is today as determined as it was yesterday and will support any initiative to reinstate the death penalty." When Bahceli announced his party's election manifesto in October 2015, he argued that the return to armed conflict in Turkey's southeast had shown that his party had been right all along:

On 19 July 2016 Bahceli announced: "If the Justice and Development Party (AKP) is ready for the death penalty, count us in too."

"In Ankara, when fighters attacked the presidential palace, during the shooting, a sister of ours had her head cut off, and it was found on the roof of a building. If you have seen this, how can you just say that there is no capital punishment in the EU or in the Council of Europe?"

European clarity on the death penalty? 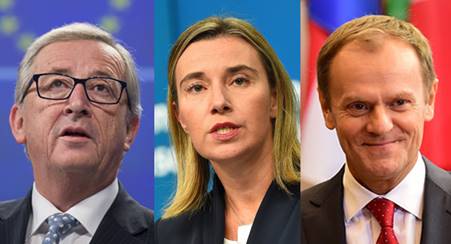 Many in the EU believe that the EU has made its position on the death penalty in Turkey clear.

On 18 July 2016, the EU's foreign affairs chief Federica Mogherini declared that "no country can become an EU member state if it introduces the death penalty … [Turkey] is bound by the European Convention on Human Rights, which is very clear on the death penalty." On 25 July 2016, Jean-Claude Juncker, the president of the European Commission, stated: "If Turkey brings back capital punishment, we will immediately stop the negotiation process." In November 2016, the European Parliament stated "that reintroduction of capital punishment by the Turkish government would have to lead to a formal suspension of the accession process."

So is everything clear? Alas, no. First there is the question what these words actually mean: "not being able to become am EU member state", to "stop", to "end", to "suspend the negotiation process", to provoke "rupture". Does it mean temporarily suspending negotiations, which requires a qualified majority in the Council? Or does it mean terminating the accession process for good, which requires unanimity?The recent past offers no guidance. In December 1999, it was possible for Turkey to have the death penalty in its laws and constitution and still become a candidate for accession. Recent Council decisions do not clarify the EU's position on possible suspension or termination, and at which point either might happen.

Threats to suspend accession talks mean little; what is needed is a clear message that introducing the death penalty would lead to a complete break in the accession process. Since breaking off accession talks requires unanimity among all EU member states, this agreement would need to be reached now. The European Union Council should make a binding commitment that any accession country reintroducing the death penalty would automatically lose its candidate status.

The Council of Europe, Europe's leading international human rights institution, also needs to be clearer and louder than it has been so far. Turkey cannot legally reintroduce the death penalty without denouncing the whole European Convention on Human Rights. Membership in the Council of Europe is not conceivable without accepting the Convention. Reintroducing the death penalty would therefore isolate Turkey in Europe more than any military coup did in previous decades.

The EU can decide by unanimity to walk away from accession talks. This is a card the EU can play once. To "suspend" talks, if this means suspending the process of "opening chapters", would be meaningless, since this process is stuck already. To break off talks is different: it would end the process of drafting annual reports on progress; stop pre-accession funds; and reduce the number of people in Brussels and Ankara engaged in assessing Turkey in light of EU standards. This would have consequences. The EU should draw red lines before they are crossed, and only when they enjoy strong enough support among all EU members so that crossing them would mean automatic sanctions. The introduction of the death penalty should be such an example. 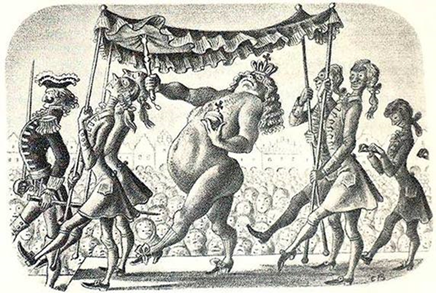 On the other hand, what happens if the EU-Turkey accession process is not abandoned? The basic problem with the accession process today is that it is incomprehensible. The transformative impact of the process is dependent on its ability to mobilise coalitions for change; yet the current EU-Turkey "negotiations" are baffling even to experts, to say nothing of the general public.

The same question can be asked for every other chapter. What happened in the months after the chapter on "regional policy" was "opened" in autumn 2013 that would not have happened otherwise? (The answer is: nothing.) What difference did the opening of the chapter on "financial and budgetary provisions" in summer 2016 make? (Same answer: none.) Would Turkey move an inch closer to joining the EU if all chapters were to be opened tomorrow? (No.) The debate on whether to open chapters is like the debate on the naked emperor's new clothes.

So what is to be done? The accession process is an invitation by Turkey to the EU to point out regularly where it is falling short. This is the European Commission's primary role in the accession process: to judge, to criticize, to assess and to compare.

A way forward – what matters

Some in Ankara are in favour of a "transactional relationship", by which they mean a frictionless relationship where the EU stops pointing out where Turkey falls short. This would truly be the end of the accession process. However, the idea that parliaments and governments in the EU will stop caring about human rights in Turkey is as much an illusion as the notion that Turkish governments will stop taking an interest in their citizens living in the EU. This will not change. The only way for a genuine improvement in the relationship passes via an improvement in the human rights situation in Turkey.

Both Turkey and the EU need a framework where sensitive issues can be discussed. The key is clarity: it needs to be clear what EU standards are, how far Turkey is from meeting them and why it is useful for both sides to remain engaged.