Last week ESI sent out a newsletter The time is now: changing EU visa policy on Turkey. There have been many reactions, from policy makers in Turkey and in the EU and in the media.

This week the ESI White List Project team is in Ankara to make the case for a visa liberalization roadmap process to begin with Turkey without delay.

Senior project advisory board members Giuliano Amato, former prime and interior minister of Italy, and Otto Schily, former minister of interior of Germany, as well as ESI analysts and representatives of the Mercator Foundation, which supports the ESI Turkey visa project, are meeting with President Abdullah Gul, senior Turkish officials and EU ambassadors.

In Ankara we will also discuss how to best achieve visa free travel at an event organized by a leading Turkish think tank, TEPAV.

The TEPAV event will take place on Thursday at 14.00-16.00 in the afternoon. For more information about this event please go here.

USAK in Ankara will also host ESI's Gerald Knaus and Alexandra Stiglmayer on Friday at 11 to discuss Breaking through the Schengen Wall: a visa liberalisation strategy for Turkey in 2012. For more information on this event please contact Mustafa Kulay (mustafakutlay@gmail.com).

How Turkey can get on the Visa White List

To get to the Schengen White List ESI recommends the following seven steps to be taken, starting this month. 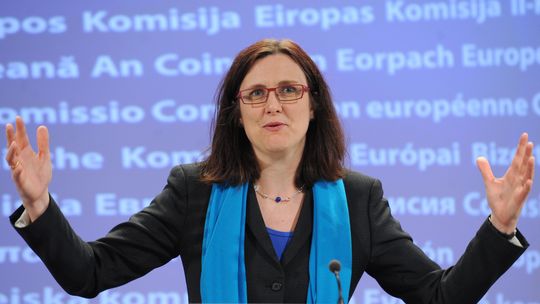 Home Affairs Commissioner Cecilia Malmström travels to Ankara as soon as possible and launches a visa dialogue aimed at visa liberalisation with Turkey.

The Commission should reassert its normal prerogative and seize the initiative on the issue. It did so in the past in the case of the Balkan countries. Then Commissioner Franco Frattini declared:

" … I would like to declare here today that a further step I am planning to pursue as a mid- or long-term perspective with our partner Western Balkan countries is a Dialogue on modalities and conditions for a visa free regime. "

Frattini spoke in the first-person, indicating that it was the Commission's decision to carry out what he called a "dialogue on the modalities and conditions for visa free regime".

The Danish Presidency suggests Council conclusions for adoption by the JHA Council in April which are similar to those adopted for the Western Balkan states in January 2008:

"The Council welcomes the launch of a visa dialogue with Turkey by the Commission and expresses its readiness to further discuss this issue with a view to define a detailed roadmap setting clear benchmarks to be met by Turkey in order to gradually advance towards visa liberalisation."

The Council could add:

"The Council calls on Turkey as soon as possible to initial, sign and ratify the readmission agreement, implementation of which is an essential step of the roadmap process."

When the visa dialogue is launched, Turkey initials the readmission agreement with the EU.

When the Commission hands over the visa roadmap, the EU and Turkey sign the readmission agreement.

It is important that the document setting out the conditions that Turkey needs to reach in order to qualify for visa-free travel is called "visa roadmap". This is the term that was used for the Western Balkan states – so far the only example where a visa liberalisation process has led to the lifting of the visa requirement. These are also the only countries that have a European perspective like Turkey.

The catalogue of conditions should NOT be called "action plan for visa liberalisation" (the name used for Moldova and Ukraine); "visa strategy" (the term initially used by the Commission for Kosovo, but later dropped in favour of "roadmap") or "common steps towards visa-free travel" (the name to be used for Russia). While these countries may obtain visa-free travel, at the moment it is not known if they really will. It is better to use the terminology of a successful precedent.

The roadmap for Turkey should also list the same – more than 40 – benchmarks as the roadmaps for the Western Balkan states. There is no reason to demand more or different things from Turkey. This is a technical process based on part of the EU acquis (chapter 23) so the requirements should be the same for all countries.

When the Commission concludes, based on reports from the experts, that Turkey has met all the conditions, it issues a legislative proposal to amend Council Regulation 539/2001. At the core of the proposal, there are two sentences:

(2) in Annex II, Part 1, the term 'Turkey (*)' is inserted in the list, where appropriate, with the following footnote: '(*) The exemption from the visa requirement applies only to holders of biometric passports."

Usually, the European Parliament is the first to deal with it. It goes through the relevant committees (LIBE = interior affairs and AFET = foreign affairs) and then the parliament votes. The parliament decides by simple majority. So far, the parliament has always been open to the idea of visa-free travel for the EU's neighbours. However, it would be useful that Turkey briefs the rapporteur and the committee members during the deliberations.

Turkey and its European allies work to assure that a sufficient number of EU member states vote positively on the Commission proposal.

To change Council Regulation 539/2001 requires that it is passed by a qualified majority. This means that Turkey needs at least 229 out of 309 votes (the UK and Ireland are not voting since they have separate visa policies). This means that no single EU member holds a veto.

The distribution of votes in the Council without the UK and Ireland is as follows:

How to get to 229 votes? A winning strategy to guide Turkey's outreach efforts to politicians and officials from the ministries of foreign affairs, EU affairs and interior affairs of different EU member states during the roadmap process could be as follows:

Together, this gets Turkey to 196 votes.

The revised Council Regulation 539/2001 is published in the EU's Official Gazette, entering into force usually shortly after the publication. Turkish citizens with a valid biometric passport can now travel without a visa to the Schengen area for a period of up to three months within a six-month period.

The case for activism

Is this achievable? We believe it is as long as three additional conditions are met:

Turkish decision makers make a strong and convincing case that they are prepared to help the EU with problems of illegal border crossings along the Turkish-Greek border and undertake a successful effort to bring the numbers down. There is a visible improvement at the border in the coming two years.

Turkey's friends among EU member states make the case in the Council that the EU needs Turkey as a reliable partner. In addition Turkey meeting the roadmap conditions is not only good for Turkey but also for the EU.

Finally, civil society organisations in Turkey and in the EU undertake a serious effort to explain to the publics in both Turkey and the EU why a fair visa liberalisation process linked to reforms is in the interests of both sides.

We know this can work because it has worked before, benefitting the EU and its partners, in the Western Balkans.