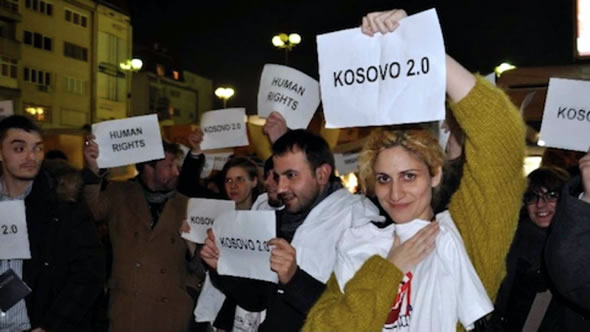 "Compared to war-zone coverage, I thought my job now – holding these former fighters accountable as politicians – was going to be a piece of cake. Little did I know." During the war in Kosovo, Jeta Xharra worked as a fixer for the BBC. She now hosts the longest-running political talk show in Kosovo. Jeta në Kosovë – or, Life in Kosovo – was aired for the first time in 2005. Since then, every Thursday evening, many citizens of Europe's youngest state switch to the public TV channel to watch her show.

At a TEDxPrishtina event in 2013, Jeta described her understanding of good journalism as "going beyond mere reporting, in order to expose corruption, in a place where power is largely male, unaccountable and, sometimes, threatening."

The fact that power is male in Kosovo is not immediately visible. Kosovo has a female president. Women occupy 30 per cent of the seats in parliament, a higher share than in 18 EU member states. But neither of these choices reflects decisions by the electorate or the political parties. The president was proposed in 2011 by the US Ambassador as a solution to a political standoff, as an alternative to new elections. The strong female contingent in parliament is due to a gender quota written into the election law at the behest of international organisations.

A glance at local elections, for which there are no quotas, reveals a more sobering picture. Only 4 out of 200 mayoral candidates in the last local elections, held in November 2013, were women. The strongest party put up a huge poster in the centre of Pristina showing the prime minister and his party's candidates for mayor under the slogan "for a European Kosovo." All were men. In the end, in 38 municipalities, one woman was elected mayor, the first in Kosovo's history.

Most rural households depend on remittances from (male) relatives abroad for their economic survival. While providing a lifeline for poor families, emigration has not broken the cycle of underdevelopment. With six people per household, three times the size of the average EU household, Kosovo families remain the largest in Europe. Extended families in rural areas are patriarchal in nature. The oldest male relative disposes of the pooled income of all family members. Women have very little economic power in such households. By providing steady income for heads of households, remittances have helped to preserve one of the most conservative social institutions in Europe – and one that has largely disappeared from elsewhere in the region. In some ways, patriarchy is a source of resilience – it helped to protect Kosovars from a hostile state for decades. Yet it also constrains women and young people and stifles entrepreneurship.

In the midst of such a male-dominated world, Jeta stands out. She is one of the most visible journalists in the country, publicly challenging taboos. With Life in Kosovo, Jeta redefined political talk shows. Instead of offering a forum for politicians to present their own ideas, she challenges her guests with difficult questions. She interviews candidates during election campaigns and then invites the winners back to her show in the middle of their mandate, to remind them of their promises.

Not everyone appreciates this challenging style of journalism. In 2009, Jeta's team went to Skenderaj municipality in central Kosovo for a report on Sami Lushtaku, its mayor. Lushtaku is one of many former commanders from the Kosovo Liberation Army who has turned politician. He received close to 100 per cent of the vote in his municipality. Reportedly, he has also become very wealthy. Arriving at the town hall, Jeta's team was refused entry and "escorted" out of town by an armed employee of the mayor. The camera was running, however, and Jeta showed the whole incident on her show.

Then a daily newspaper considered close to Lushtaku began a smear campaign against her. Jeta was called a "Serb spy" who was "shortening her own life" by producing her show. Now emails with death threats flooded her inbox. "These articles called for my lynching," Jeta told a court in 2013, after she had sued Lushtaku and the editors of the paper. In the end, the court acquitted everyone, unable to establish a link between the smear campaign in the media and the threats she had received. In May 2014, Jeta's appeal was rejected on the grounds that the case had become too old.

This episode did not stop her, however. On the contrary: as Kosovo director of the Balkan Investigative Reporting Network (BIRN), she expanded her efforts. Today, BIRN Kosovo employs 70 people. For another show called Justice in Kosovo, her team monitors court proceedings. For the English language paper Prishtina Insight and the Albanian language online service Gazeta Jeta në Kosovë, they report on governance and corruption in schools, hospitals and other institutions.

Besa Luci is another young Kosovo woman challenging taboos. She is the editor of the magazine and blog Kosovo 2.0. The fourth issue, published in December 2012, was about sex. Over 160 pages, it included articles on the benefits of masturbation, a guide for Pristina's nightlife and accounts of what it is like to be gay in Kosovo. This was the first time that LGBT (lesbian, gay, bisexual and transgender) issues had been publicly discussed in Kosovo. "Our stories," Besa wrote in the editorial, "give a thorough account of how lesbian, gay, straight, bisexual, transgender and intersex people negotiate their lives with regard to their own identities, genders, family, communities, as well as how they deal with a lack of social support and widespread displays of homophobia."

The launch of the December 2012 issue at Pristina's youth and sports centre proved her point. A group of men interrupted the event. They beat up one of the staff and destroyed the stage. A party planned to take place in the evening had to be called off because some 200 men staged an anti-gay protest in front of the venue. Besa and her team had to be escorted out by the police. Later that night, an LGBT activist was attacked in her office. In the following days, videos of Besa with a target drawn over her head were spread through social media.

The attacks on the Kosovo 2.0 team succeeded in sparking a debate in Kosovo about LGBT rights. The government issued a statement in support of freedom of expression and the rights and freedoms of all people in Kosovo. It condemned the violence. Civil society, media, human rights groups and the Ombudsperson came out in support as well.

Both Besa and Jeta see patriarchy and its traditional values as central to Kosovo's backwardness. This reflects their experiences as liberal women in their 30s living in Kosovo today.

Both come from families that valued education. Jeta's grandfather, Memhet Gjevori, drafted the first Albanian grammar book and worked to overcome female illiteracy in Kosovo, still at 95 per cent in the mid-20th century. In the 1990s, repressive policies by the Serbian government of Slobodan Milosevic forced Albanian-language education into an informal parallel system. Jeta's mother, although jobless and without income at the time, put both herself and Jeta through an English course. She later sold her wedding jewellery to buy a personal computer for Jeta to have access to email. Besa's mother, who had also lost her job, turned her home into a place of informal education, where teachers could tutor Besa and her friends.

Later, both Jeta and Besa were able to attend universities abroad. Jeta studied War Studies at King's College London, focusing on the military, philosophical and social dimensions of conflict. She also enrolled in screenwriting at the London College of Printing. Besa got a master's degree in journalism and magazine writing from the Graduate School of Journalism of the University of Missouri.

Both Jeta and Besa returned to Kosovo with ambitions. Jeta "wanted to set up BBC in Kosovo – or at least set up BBC-style journalism." Besa wanted to create a new type of magazine. "I thought: here is a country where politics and policy making is discussed exclusively at the level of government representatives. They never talk about people, how their policies affect them. I became obsessed with the idea of starting a magazine where I talk about ordinary people and to which ordinary people contribute."

What have Jeta and Besa achieved? While Jeta fuelled the discussion about corruption, and some of the cases she reported on led to indictments, the rule of law remains weak in Kosovo. While the debate on LGBT in Kosovo triggered by Besa's team broke a taboo, "we did not manage to have a wider discussion about sexuality in our conservative society," says Besa. The debate did, however, prompt the Kosovo government to establish an inter-ministerial National Advisory and Coordination Group for the rights of the LGBT community. The Ministry of EU Integration hosted a conference on LGBT issues. Three of the attackers were put on trial and received prison sentences. All of this was unprecedented.

Kosovo's (male) politicians repeat on every occasion that they see their country's future as a member of the European Union. For this to happen, however, not only will the five EU member states yet to recognise Kosovo's independence need to change their position, but the country will need more people willing to challenge its taboos. It will need champions for girls' education, a revolution in the labour market and new forms of family life and gender relations. It will need scholarships for young women to study abroad and young women willing to return to take on the patriarchal values that still set Kosovo apart. It will need more women like Jeta and Besa for a European Kosovo, Kosovo 2.0, to become a reality.