An airlift 2022 for Ukrainians

And a European plan to help refugees in Moldova

Europe has not yet understood that Ukrainian refugees are part of Putin's plan of attack. What an answer to the millions of refugees could look like.

Four weeks into Russia’s assault, more than 3.5 million people have already fled Ukraine. If things continue as they are going, a total of 5 million Ukrainians will have fled to the EU by the end of March. It could be 10 million refugees reaching the European Union within another few weeks after that.

Knowing the numbers is one thing. Understanding their importance is something else entirely. Some in Europe still find it difficult to understand their significance: what it means to experience the biggest refugee catastrophe in Europe since the end of the Second World War. However, European leaders do not have much time to adapt to this new reality. They must, immediately, act and think in ways appropriate to the scale of this humanitarian challenge.

During the equally historic refugee movement in 2015, one million people crossed the Aegean from Turkey in 12 months. Since the beginning of Vladimir Putin’s attack on Ukraine on 24 February, more than 100,000 people – mainly women and children – have fled from Ukraine to the European Union and Moldova every day. That is 1 million people a week.

The practical question is: how can the rest of Europe respond?

Poland, Romania, Moldova, Hungary, and Slovakia cannot be expected to take all these people in. In Warsaw (population before this crisis: 1.8 million) there are already 300,000 refugees, 90,000 of them children of school age. In Poland alone, there are an estimated 2.1 million refugees. Europe’s poorest country, Moldova, is now hosting more than 100,000 refugees; more than wealthy Austria took in during the whole 2015 crisis.

A few weeks ago, we predicted that 10 million Ukrainians might flee their country. This was based on the experience of the wars Vladimir Putin had previously waged, such as in Chechnya in 2000. In Syria, where Putin’s forces back Bashar al-Assad, a fourth of the population had to flee abroad because of the massive brutality and wanton destruction of civilian infrastructure. One month into the war in Ukraine it is becoming clear that 10 million refugees is, unfortunately, an all too realistic assumption.

Millions of people, mainly women and children, will thus be looking for accommodation and reception in the coming weeks. Where, and how, will they find them? Poland has taken more than it will be able to look after already. So have other neighbours of Ukraine. Neither Central-European EU members nor Germany alone will be able to provide all of them with adequate shelter and services, including schooling for the very larger number of children, unless there is a broader mobilisation of European and North American democracies.

If another 2 million people arrive in the next two to three weeks, then one million is likely to make its way to Austria and Germany by train or car. Another million, however, should be offered to board planes (or buses) to be taken directly to other counties in Europe: to Spain, Portugal, Ireland, or Sweden, but also to the UK, perhaps even to the United States and Canada.

Is that realistic? If Spain and Portugal together were to agree to take in 160,000 by the end of March, and France and the UK each did the same then yes, it would be possible. This would mean: 1,500 flights with 300 people on board by the end of March to those four countries alone. 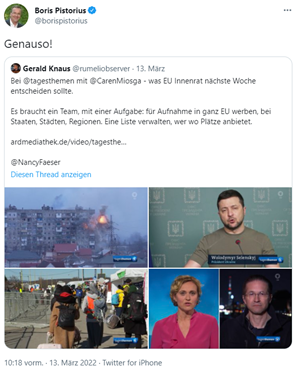 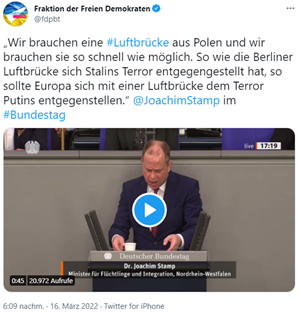 Joachim Stamp, the refugee and integration minister in North Rhine-Westphalia, Germany’s most populous state, recently called on the German chancellor, Olaf Scholz, to work with France to help evacuate 1 million refugees from Poland and Moldova for resettlement throughout Western Europe, and possibly North America. The Minister of the Interior of German state of Lower Saxony, Boris Pistorius, called for such a mobilisation to start right away.

In Sweden, the government has understood the seriousness of the challenge and is talking about a scenario of taking in up to 200,000 people. The Austrian government is referring to similar figures. Germany is preparing to accommodate one million people soon.

It is very likely that in the end a higher share of refugees will remain in the countries close to Ukraine, from Poland to Austria, from Moldova to Hungary. But to ensure that there is no chaos, that there are not hundreds of thousands of mothers and children (who constitute the bulk of the refugees) left out in the cold, that they are protected from exploitation, and that there is quick access to accommodation and to schooling, there needs to be a wider distribution.

The logistics of such an airlift for refugees from Ukraine are an enormous, but not an insurmountable, challenge.

It does not matter whether refugees end up being moved by Lufthansa or easyJet planes. In each participating country, a similar civil society mobilization to that already taking place in Poland and Germany would be required, with appeals to private individuals and cities to take people in. In the short term, there would be a need to mobilise temporary accommodation in empty halls, hotels, state reception centres.

For this to work, Ukrainian refugees would have to trust that it would be in their interest to fly from Chisinau, Iasi, Prague, Warsaw or Leipzig to Lisbon, Dublin, Madrid, Lyon, or Manchester. The communication and logistics needed require a level of collective organization the like of which has not been seen in Europe for decades. It is not comparable to any relocation or resettlement effort with which European or international institutions are familiar.

Thankfully, the legal basis for such a humanitarian effort already exists. With the entry into force of the EU Temporary Protection Directive, all those who flee to the EU have the right to be admitted anywhere in the EU. Switzerland and Denmark have adopted similar legislation at the national level. This makes things far simpler and constitutes a big departure from previous refugee policy, where national governments have sometimes blocked cities from taking in refugees on their own initiative. If all major cities in the EU announced today that they would want to take in more than two percent of their population, if someone could organise this, such an effort could begin immediately.

The major challenge is not logistics, it’s politics

The biggest challenge in making such a scheme work is not legal, nor even logistical, though logistics will be a huge challenge; it is political.

Which institution could, within days, coordinate such a historic effort for a successful Refugee Airlift 2022? Who will discuss with the Spanish prime minister how to move not 20,000 refugees in the next few months, but 120,000 in a fortnight? Who will talk with the government in London, where the EU’s Temporary Protection Directive does not apply, how UK cities and citizens could participate in such an effort immediately?

Central to such an effort would be to communicate effectively in the many languages of Europe why such an effort is needed and what it is ultimately all about: a humanitarian endeavour to both help millions of people and to thwart Putin’s cynical political calculations that democracies cannot handle these refugees and that millions fleeing Russian bombs might destabilize European societies and their institutions.

This is why a small, flexible and political structure, preferably appointed to act in the name of both the EU and the G7, is needed immediately, best headed by an A-team of able, well-connected communicators - former heads of government or senior ministers. France’s Emmanuel Macron and Chancellor Olaf Scholz, who fortunately currently chair the EU and G7 respectively, might appoint this team now. Wanted: a mixture of Lucius Clay, the American general of the Berlin Airlift, and Ernst Reuter, the charismatic West Berlin mayor at the time, both protagonists of the first major political and humanitarian test in the last Cold War.

Such a coordination team does not need formal authority, as it should not compete with existing institutions, from the European Commission to international organisations, but cooperate with them. This is possible through persuasion and a focus on a common task. Success would require three things:

All of this was achieved in 1948, when beleaguered West Berliners were supplied by more than 170,000 flights by allied pilots. The Berlin Airlift was a powerful political response that changed Europe’s policy to this day. It gave rise soon after to the institutions of today’s West: NATO, the Council of Europe, the first steps toward European integration. Stalin’s blackmail failed.

Today, Putin’s cynical goal of blackmailing Ukraine and the EU through brutal warfare leading to mass displacement, as in Syria and Chechnya, must fail and must be seen to fail. Desperate Ukrainian refugees are part of Putin’s plan of attack. His calculation is as ruthless as it is transparent: by expelling civilians, he hopes not just to demoralize Ukrainians and force them to surrender but also to make the EU turn against and betray Ukraine. This must not happen.

An Airlift 2022, a Macron-Scholz-EU-G7 initiative to implement the most generous refugee reception policy worldwide in decades, would be an appropriate response. It is about helping people, as well as bolstering the authority and credibility of the West as a community of values. It would be a humane response to inhumane cynicism.