ESI conference in Berlin, 2 June 2014: Towards a Europe without political prisoners

The European Stability Initiative and Christoph Strässer, Federal Commissioner for Human Rights of the German government, have the pleasure to invite you to a conference that will take place in Berlin in the first week of June entitled:

"Towards a Europe without political prisoners"

Supported by the Open Society Foundations

We are inviting senior European policy makers, parliamentarians, and human rights activists to discuss what different institutions – the Council of Europe, the European Union and international human rights organisations – must do to realise the vision of a Europe without political prisoners in the near future.

This is a very important issue for the Office of the Federal Commissioner for Human Rights of the German government and for the European Stability Initiative, which has also published a number of reports on this issue. 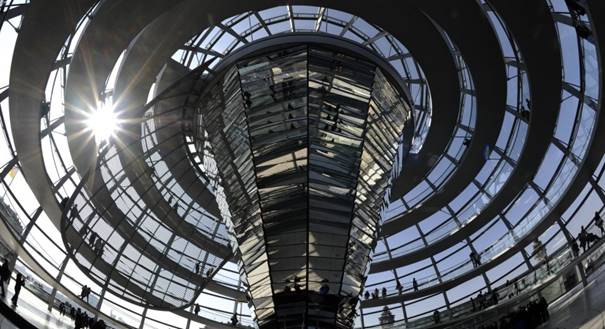 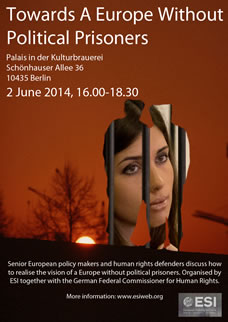 The conference will open on Monday June 2, 16:00 in the afternoon with a panel on "A Europe with-out political prisoners – how to get there?"

Please watch two presentations from a recent conference in Oslo to learn more about this conference's background:

Some of the participants:

Christoph Strässer is Federal Commissioner for Human Rights Policy and Humanitarian Aid of the German Government and has decades of human rights work experience. He has been a member of the German Bundestag for the Social Democrat Party since 2002, representing Münster. Christoph Strässer was the third rapporteur on political prisoners in Azerbaijan (2009-2013) in the Parliamentary Assembly of the Council of Europe (PACE). In his June 2012 report, he analysed 85 cases of alleged political prisoners in Azerbaijan and concluded there was a systematic pattern of politically motivated imprisonments. His draft resolution containing a definition of political prisoners was adopted by PACE in October 2012. During his term as a rapporteur Christoph Strässer was repeatedly denied entry to Azerbaijan and slandered in pro-government media.

Khadija Ismayilova is Azerbaijan's best-known investigative journalist and a radio host working for the Azerbaijani service of Radio Free Europe/Radio Liberty. She decided to fully commit herself to investigative journalism in 2005, after the still-unsolved murder of her colleague, prominent journalist and newspaper editor Elmar Huseynov. In her hard-hitting articles, Khadija has shed light on high-level corruption in Azerbaijan, including lucrative business deals of the Azerbaijani president's family members and the Aliyev daughters' hidden interests in a large Azerbaijani mobile phone company. In 2010, her report on how the dubious privatization of the state-owned airline company and its holdings benefited the president's family was recognized as the best investigation among the 28 language services of Radio Free Europe/Radio Liberty. In 2012, Khadija Ismayilova received the Courage in Journalism award from the Washington-based International Women's Media Foundation, as well as the Gerd Bucerius Prize for Free Press in Eastern Europe from the German ZEIT Foundation. As a result of her work, she has been subjected to blackmail attempts and smear campaigns in pro-government media outlets.

Bjørn Engesland is Secretary General of the Norwegian Helsinki Committee. He started working in the Norwegian Helsinki Committee in 1995 and became Secretary General in 1996, working on human rights dialogues and international processes. Bjørn Engesland has a masters degree in law from the University of Oslo and has formerly been employed at the Norwegian Institute for Human Rights of which he is now a board member. As a student, he demonstrated for the release of political prisoners and raised awareness on the Cambodian genocide and the Soviet invasion of Aghanistan.

Markus Löning is a German politician from the Free Democratic Party (FDP) and former Federal Government Commissioner for Human Rights Policy and Humanitarian Aid (2010-2013). He currently manages the Löning - Human Rights&  Responsible Business consultancy. He was a member of the Bundestag from 2002 to 2009 and also served as chairman of the FDP in Berlin from 2004 until 2009. An outspoken critic of human rights abuses in Azerbaijan, Löning demanded the release of political prisoners ahead of the Eurovision Song Contest in Baku in 2012. In response, the Azerbaijani authorities and pro-government media accused him of leading an anti-Azerbaijani campaign in Germany. In addition to Azerbaijan, Löning has also worked on the human rights situation in Belarus, Ukraine, China, North and Central Africa, Turkey and Myanmar. He has called on the US government to close the Guantanamo Bay detention camp, which he visited in 2012, and has advocated for letting Edward Snowden travel to Germany.

Michael McNamara is an Irish Labour politician and a member of Dáil Éireann, the lower house of the Irish legislature. Michael McNamara worked as a human rights lawyer with the OSCE in Eastern Europe and with the United Nations in Afghanistan before returning to Ireland in 2005 to run his family farm and practice law. He continued to work as a consultant for the EU and UN until elected in 2011. He has been a member of the Parliamentary Assembly of the Council of Europe (PACE) since January 2012 and sits on the Committee on Legal Affairs and Human Rights. He has been outspoken in his criticism of Azerbaijan's lobbying in the Council of Europe.

Emin Milli is a writer and former political prisoner from Azerbaijan. He is the managing director of Meydan TV, an independent weekly online TV channel that he founded with other bloggers and journalists in 2013 in Berlin. Emin studied law in Azerbaijan and Germany and holds a Master's degree from London's School of Oriental and African Studies, where he researched the role of new media in Arab Spring revolutions. In the past, Emin worked as a coordinator for the International Republican Institute in Azerbaijan, as director of the Friedrich Ebert Foundation in Baku and advised the Council of Europe on over 40 cases of political prisoners. He also founded the Alumni Network (AN), a pro-democracy group bringing together Western-educated Azerbaijanis.

In 2009, soon after making a satirical –donkey– video targeting government corruption, Emin was arrested on trumped-up hooliganism charges. He was sentenced to 2.5 years and spent 16 months in Baku's notoriously brutal Prison No. 5. He was released in November 2010 following mounting pressure on the Azerbaijani authorities from the international community, including US President Barack Obama. He continues to advocate for the rights of political prisoners in Azerbaijan and abroad. Emin Milli has published in several leading media outlets, including The Independent.

Bill Browder is the CEO and co-founder of the Hermitage Capital Management investment fund and former employer of Sergei Magnitsky, a Russian auditor who uncovered a large-scale government corruption scheme, who arrested on tax evasion charges and died in police custody in 2009. The Hermitage Fund, which was created in 1996, used to be the largest foreign owner of Russian shares (4 billion USD in 2005). In November 2005, the Russian government declared Browder to be a –threat to national security– and banned him from entering the country. After Magnitsky's death, Browder launched a large-scale campaign in the US which led to the passage of the Magnitsky Act by the US Congress in 2012. The Act imposes financial and travel sanctions on Russian officials involved in Magnitsky's death. In 2013, a Russian court tried Browder in absentia and sentenced him to 9 years on tax evasion charges. Browder is currently campaigning for the adoption of Magnitsky Act-type legislation in the EU.

Piotr Switalski is Director for Policy Planning at the Council of Europe. In his diplomatic career, he served as Ambassador and Permanent Representative of Poland to the Council of Europe (2005-2010), Deputy Foreign Minister of Poland (2005), Director of the Department of Strategy and Foreign Policy Planning of the Ministry of Foreign Affairs of Poland (2002-2005). He was Senior Diplomatic Adviser to the OSCE Secretary General (1993-1996) and posted as Deputy Chief of Mission to the OSCE in Vienna (1990-1993) and the UN Office in Nairobi (1999-2002). Piotr Switalski holds a PhD in International Relations from the Moscow State Institute of International Relations, while he studied at the Warsaw University.

Jamison Firestone is an American lawyer with over twenty years experience working with Russian law and business issues. He has extensive experience structuring the Russian operations of foreign companies and joint ventures. He lived in Moscow for eighteen years and has managed a law practice there since 1993. He was also a member of the Board of Directors of the American Chamber of Commerce in Russia for six years and he was a weekly columnist for Vedomosti, Russia's leading financial newspaper. He fled Russia after his law partner Sergei Magnitsky died in Russian custody after trying to expose government tax fraud. He has now been based in London since 2010. In addition to advising clients on legal matters, he often brings public and government attention to cases which would not be resolved fairly in the absence of such attention. Many of his cases involve multi-jurisdictional investigatory work, either to find assets or to get a clear picture of the real parties involved in a transaction. Jamison Firestone is also an advocate for human rights abuses in Belarus and for sanctions against the Lukashenko regime.

Yana Zabanova has been working for ESI as an analyst since 2009. She holds an MA in International Relations and European Studies from Central European University and a Master's degree in public policy from the Hertie School of Governance in Berlin. Prior to joining ESI, she has worked as a policy analyst with the Buryat Republic Ministry of Economic Development, as a project assistant with the European Commission's TACIS programme in Russia, and conducted research at the German Institute for Economic Research (DIW) in Berlin. Yana's areas of interest include post-Soviet politics, energy security, and EU-Russia relations.

Ben Judah is a UK writer and journalist. He is the author of Fragile Empire: How Russia Fell In And Out Of Love with Vladimir Putin published by Yale University Press in 2013. He has written extensively on the West's weak response to Russia's actions in the Ukraine crisis. In his recent op-ed in the New York Times, –London's Laundry Business–, he criticised the UK government for failing to impose sanctions on Russia and argued that Britain was –laundering oligarchs' dirty billions.–  In the past, Ben Judah reported for Reuters in Moscow and was a research fellow at the European Council on Foreign Relations working on Russian politics. His reporting from across the former Soviet Union – including on the Georgian war in 2008 and the Kyrgyz uprising of 2010, has been featured in the Financial Times, the Economist, Foreign Policy, Prospect and Standpoint. A dual British and French national, he spent his childhood in Romania and the former Yugoslavia before studying Modern History and Politics at the University of Oxford.

Gerald Knaus is the founding chairman of the European Stability Initiative (ESI), a Berlin-based think tank focusing on the European neighbourhood. He is also Associate Fellow at the Carr Center for Human Rights Policy at Harvard University's Kennedy School and a founding member of the European Council on Foreign Relations. Gerald Knaus studied in Oxford, Brussels and Bologna and worked with international NGOs and the UN in Bulgaria, Bosnia and Herzegovina and Kosovo. He has co-authored several ESI reports on Azerbaijan, including – Caviar Diplomacy – How Azerbaijan Silenced the Council of Europe – (2012) and – Disgraced - Azerbaijan and the end of election monitoring as we know it – (2013). He recently published an op-ed on Azerbaijan and the Council of Europe in the Frankfurter Allgemeine Sonntagszeitung (Politische Gefangene? Hier doch nicht! – (Political Prisoners? Certainly not here!)