Essay 1 - The promise and the agony – saving the refugee convention

It is ten weeks until 28 July, the 70th anniversary of the Geneva Refugee Convention. This convention, negotiated in the summer of 1951, introduced a radical new idea: that states should give protection to anyone who has “a well-founded fear of being persecuted for reasons of race, religion, nationality, membership of a particular social group or political opinion.” Any person meeting these universal criteria is a refugee and should never be “pushed back” – in French: refoulé – into a situation of potential persecution and serious harm.

The non-refoulement principle is at the heart of this convention. Over time it was extended, from those in Europe forced to flee due to “events before 1951” to anyone at any time from anywhere. Non-refoulement also applies today to those who face torture and inhumane treatment, the death penalty and indiscriminate violence in situations of armed conflict.

Adherence to this global refugee protection system has always been fragile. The non-refoulement principle has been violated many times since 1951. And yet, today the system risks collapse, as pushbacks are carried out routinely across the world, including in Europe, in Australia and in the US. How to protect the Geneva refugee convention today? How to persuade majorities in Europe and beyond that its implementation is not only possible but also in their interest? To answer these questions, we are launching a series of ten essays, one every week, on Humane Borders and the future of asylum.

UNHCR considers a refugee to be someone who crosses a border and is then recognized by a state as in need of international protection. Those who do not manage to cross international borders are not counted. For refugee statistics therefore more refoulement means fewer refugees.

According to UNHCR, the number of refugees worldwide increased from 11 million in 2013 to 20 million in 2019, leaving aside the descendants of the Palestinians who fled Israel before 1948; and Venezuelans, which UNHCR has so far considered a special category of displaced.

One third of these additional refugees – 3 of 9 million – are in just one country, Turkey. Another 4 million are in four countries: Germany, Uganda, Sudan and Bangladesh. If Turkey, Uganda, Bangladesh and Sudan had not allowed millions of people to cross their borders from Syria, South Sudan and Myanmar in recent years the number of refugees in the world would be much lower today.

Could these states also have decided to close their borders? If Turkey had started to build a wall in 2011, had deployed its soldiers, had introduced visa requirements for Syrians early on and had practiced refoulement millions of Syrians would have remained trapped. Unlike Turkey, another neighbor and signatory of the UN refugee convention, Israel, did keep its borders closed to Syrian refugees from the outset. Then, in summer 2015 Turkey also began constructing a wall along its border. By 2016 all of Syria’s neighbours had largely stopped new refugees crossing their borders. As a result, millions of internally displaced Syrians are unable to leave their country.

It is not hard to imagine a dystopian world in which it is almost impossible for people in search of protection to cross international borders. In such a world some states prevent anyone from leaving (as the GDR did before 1989 and North Korea does today) and others prevent anyone from entering, employing high fences and barbed wire, armed border guards prepared to shoot and carry out pushbacks at sea. In a world of universal refoulement and violent borders there would be no refugees, even if persecution were to increase dramatically in some states.

This was the world many of the delegates, who gathered in Geneva in summer 1951, also remembered. The very country in which they met, Switzerland, had practiced the refoulement of desperate people fleeing persecution and murder with devastating effectiveness.

The refugee convention was drafted to ensure that what happened to Bertold Berger, his wife Trude, and their small children Heinz and Fredi would never happen again. Bertold Berger, a dental technician in Vienna, fled his hometown in autumn 1938 following its incorporation into the Third Reich. The family managed to cross the Austrian-Swiss border into Switzerland. Switzerland then refused to grant them protection, but allowed the Berger family, temporarily, to wait for a visa to continue to Uruguay. When this visa did not arrive in time the whole family was deported back to Nazi Germany. All were later murdered in a death camp.

Bertold Berger and his family were persecuted in the Third Reich because they were Jewish. They were denied protection in Switzerland, like tens of thousands of others, for the same reason. While the idea of asylum had been around for a long time, before 1951 states understood asylum as something to be granted at their discretion. It was not linked to any universal criteria or threats of individual persecution. Thus, the Swiss government at the time decreed:

“Political refugees, that is, foreigners who declare themselves as such when first questioned and can also provide proof, are not to be expelled. Those who seek refuge on racial grounds, as for example, Jews, are not considered political refugees.”

During the entire Second World War Switzerland accepted only a few hundred people as “political refugees.” Jews seeking protection from Nazi terror were excluded, considered “too many and too different.” Authorities feared Überfremdung or “foreign infiltration”.

But how many were “too many”? In 1941 the foreign population in Switzerland stood at 5 percent. By 1960 it would be 17 percent and today it is more than 25 percent. However, to Swiss politicians at that time even small numbers of Jewish refugees seemed unacceptable. The responsible minister, Eduard von Steiger, told a gathering of young protestants in Zurich in August 1942 in a famous speech that the Swiss “boat was full”:

“Whoever commands a small life boat that is already quite full, of limited capacity, and with an equally limited amount of provisions, while thousands of victims of a sunken ship scream to be saved, must appear hard when he cannot take everyone. And yet he is still humane when he warns early against false hope and tries to save at least those he had taken in.”

In fact, by the end of the war in 1945, Switzerland sheltered only 21,000 European Jews without granting them refugee status, among them 2,203 Jews from Germany and Austria.

How many Jews from the Third Reich might Switzerland have welcomed? If Switzerland had taken in 200,000 – the number of German and Austrian Jews killed in the Holocaust was about 230,000 – it would have been five percent of its population. This would be comparable to the number of Syrians and other asylum seekers Turkey accepted between 2011 and today.

For more on this dramatic story and why it still matters:

NEW
Swiss tragedy – borders and refoulement
(From the book: Which Borders do we need?)

Non-refoulement requires that anyone who meets the criteria of the convention, regardless of ethnicity or religion, must not be pushed back. The refugee convention does not discriminate based on the background of those who seek protection. It makes distinctions based on who needs protection. This distinction is to be made by public institutions: asylum services and courts.

One obvious problem is that most states in the world do not have credible asylum systems, capable of applying the criteria of the refugee convention fairly. In theory, the UNHCR could fill the gap, determining itself who needs protection. In 2019 it did so in a few dozen countries, taking a total of 118,000 decisions on determining refugee status and granting international protection to 44,300 people.

The data on protection granted worldwide following asylum procedures reveals the extent to which the impact of the Geneva Refugee Convention remains dependent on what happens in Europe. According to UNHCR, between 2013 and 2019:

Sweden, international protection given, compared to 10 other states 2013-2019

Against this background, what is the future of asylum in a world in which European democracies implement an ever more effective strategy of pushbacks at their external borders? Already between 2016 and 2019 the number of people who receive protection worldwide, following a refugee status determination process, dropped from 900,000 to 530,000. Will this decline continue, as fewer potential refugees reach countries ready to recognize their status? And as rich European countries close their borders and push back irregular migrants without individual determination of their protection needs: why would other states not do the same? And what then remains of the 1951 convention?

At this moment such a world seems more elusive than ever. Even European democracies appear to be turning their back to the promise of 1951. So what is to be done?

Next week: what all Europeans should learn from Australian migration policy since 2013; the limits of empathy and the future of advocacy; how courageous is UNHCR? 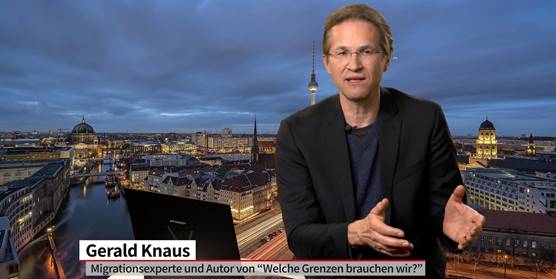 Why International protection is at risk:
Myths and facts on global asylum

Please join us for a discussion of the future of the refugee convention
and the issues raised by this newsletter.