Why Orban had to leave the EPP

Europe's centre-right is better off without Fidesz

Hungary’s Fidesz left the European People’s Party EPP. This is good news. For years, Viktor Orban’s islamophobia and “illiberal democracy” have made a travesty of Christian democratic values. Orban’s policies and aims are borrowed from the playbook of Europe’s far right and threatened to eat the EPP from within. ESI has written about “Europe’s most dangerous man” since September 2015 and made the case for Fidesz’ expulsion from the EPP. With Fidesz now gone, the EPP should actively try to find a new partner in Hungary.

ESI report: The wizard, the virus and a pot of gold - Viktor Orban and the future of European solidarity (18 Apr 2020)

ESI background: "On the brink of victory" - Viktor Orban, rhetorical poison and a vision of hell (15 June 2018)

On 3 March 2021 the European People’s Party (EPP) voted to amend its statutes, allowing for the suspension of an entire group of lawmakers. On the same day Hungarian prime minister Viktor Orban declared that his Fidesz party would leave the EPP group in the European Parliament. On 18 March Fidesz announced it would leave the EPP altogether. This is good news for the EPP and for democracy in Europe.

More than five years ago, in September 2015, ESI described how Orban exploited the refugee crisis to press for a far right agenda on the European level:

"Orban pushes a clear narrative: the problem is the ‘liberalism’ of European leaders, particularly, but not only, in Germany. In a speech on 5 September this year Orban puts his cards on the table: this crisis is in fact a welcome opportunity to end the EU’s association with universal human rights; to effectively abolish the right to asylum for Muslim refugees, and to create a different, illiberal, Europe. He pretends to be concerned about solving a problem; in fact, he welcomes the problem and waits to benefit from a deepening crisis."

In autumn 2016 ESI talked to The Economist: “Mr Orban presents a unique danger, argues Gerald Knaus of the European Stability Initiative, a think-tank, because he injects a far-right virus into the bloodstream of Europe’s political centre.” The Economist took up ESI’s comparison of Viktor Orban to L. Frank Baum’s Wizard of Oz who was all into making believe and humbug, writing:

"Mr Orban’s rabble-rousing offers little to policymakers grappling with mass migration ... Pull aside the screen, argues Mr Knaus, and the scary Mr Orban will be revealed as a shrivelled demagogue with nothing to say." 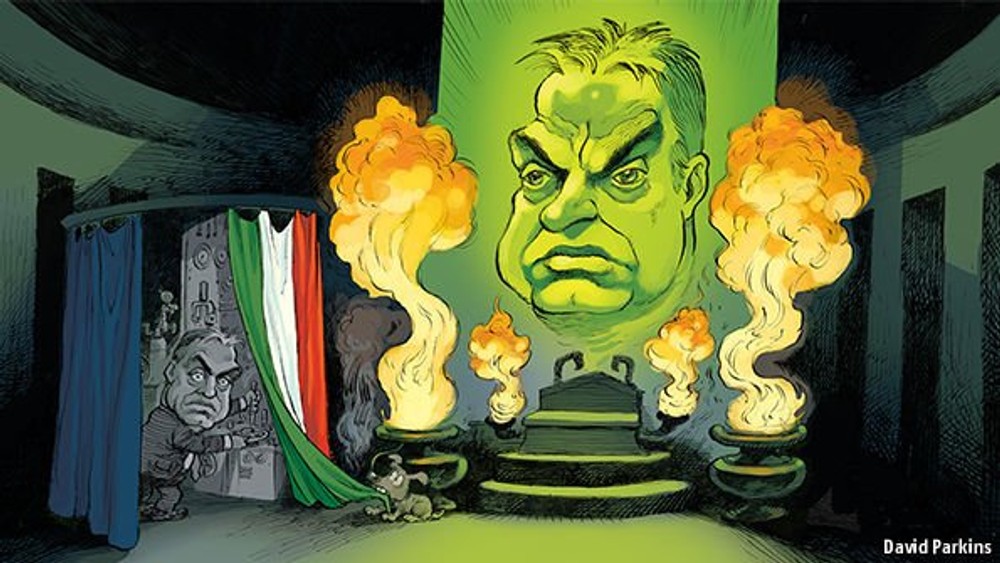 In a newsletter published at the same time ESI called on the EPP “to respond to this challenge and show Orban where he and his ideas really belong: to the far-right, the European fringe.”

While a majority in the EPP was still reluctant to stand up to Mr Orban, his islamophobia only became stronger and his attacks on EPP party colleagues ever more ruthless. In his “State of the Nation” address in February 2018 Orban declared:

"If everything continues in this way, then the cities of Europe will clearly have majority Muslim populations – and London will not be an outlier, but a pioneer. If things continue like this, our culture, our identity and our nations as we know them will cease to exist. Our worst nightmares will have become reality. The West will fall, as Europe is occupied without realising it. Will this be a vindication of the views of those who think that civilisations are not killed, but commit suicide?"

The real problem though, Orban claimed, lay not in the East and South, but in the West:

"We have prevented the Muslim world from inundating us from the south [with Hungary’s fence] ... However absurd it seems, the situation is that now the danger is threatening us from the West. This danger to us comes from politicians in Brussels, Berlin and Paris. They want us to adopt their policies: the policies that made them immigrant countries and that opened the way for the decline of Christian culture and the expansion of Islam."

But Orban claimed he was prepared to turn things around in an ultimate fight: “Of course we shall not look on impassively; we are not sheep, who quietly stand around waiting for their fate to be visited upon them. Naturally we shall fight ...”

Hungary accounts for 1 percent of the EU’s GDP and 2 percent of its population. Yet, since 2015 Orban has become one of the European leaders defining the continent’s political discourse. Orban is no shadowy, dark force like J.K. Rowling’s Lord Voldemort. Rather, he is Mephistopheles: an erudite, persuasive wizard who – until recently – coaxed European centre-right parties to hand him their soul.

Fidesz’ exit finally freed the EPP from a member whose mission had become to undermine the party’s core values, in particular human dignity, solidarity, human rights and the rule of law.

Fidesz’ small satellite party KDNP (Christian Democratic People’s Party), which holds one seat in the European Parliament, is now the only EPP member from Hungary. In order to avoid leaving the whole conservative spectrum to Viktor Orban and thereby to the far right, the EPP should now actively identify a new Hungarian partner to work with on the European and, in particular, on the national level.

Report The wizard, the virus and a pot of gold - Viktor Orban and the future of European solidarity 18 April 2020
Background "On the brink of victory" - Viktor Orban, rhetorical poison and a vision of hell 15 June 2018
Newsletter 6/2016 The most dangerous Wizard in the EU 7 October 2016
The Economist http://www.economist.com/news/europe/21708252-viktor-orban-succeeds-only-because-europe-cannot-hold-together-wizard-budapest The wizard of Budapest 8 October 2016
Newsletter 9/2015 Refugees as a means to an end – The EU's most dangerous man 24 September 2015

Report
The wizard, the virus and a pot of gold - Viktor Orban and the future of European solidarity
18 April 2020
Background
"On the brink of victory" - Viktor Orban, rhetorical poison and a vision of hell
15 June 2018

Vienna: ESI at online discussion on media situation in Hungary
30 September 2020
Gracanica: ESI discusses Viktor Orban’s interest in the Western Balkans
17 June 2020
Berlin: ESI in online debate: "Can the EU Survive the Democratic Decline after the Pandemic?"
9 June 2020
Stockholm: ESI presentation at the Swedish International Development Cooperation Agency (Sida) on “Europe and the Western Balkans - Where are we heading?”
20 February 2020
Budapest: ESI at launch of "Reporting Democracy"
31 May 2019
Please enter your search term