2014 and the threat to Sakharov's legacy 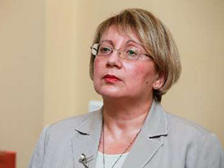 Honourable Member of the European Parliament,

This has been a dramatic year for East European human rights defenders. Recent months have seen unprecedented waves of political arrests in the former Soviet Union, in particular Azerbaijan and Russia. This is not a passing phenomenon. It is the result of a deliberate policy by these regimes to crash all independent voices, as they engage in increasingly aggressive repression.

As you reflect on the 2014 Sakharov Prize, please take into account how awarding the prize to Leyla Yunus would help protect the legacy of Andrei Sakharov.

The attack on Memorial

News from Russia this week highlights the threat to Sakharov's legacy. Memorial, the organisation he founded, is under attack:

"The Russian government is threatening to eliminate Memorial, the most important support network for Russian civil society. On Friday, the ministry of justice filed a suit asking the Supreme Court "to liquidate" – a very heavy word – the country's oldest civil-rights organization. A hearing is scheduled for Nov. 13…"

Memorial continues to speak out against radical nationalism. It also continues to defend those unjustly imprisoned by the state:

"Authorities do not like Memorial's consistent support for what the organization called 'political prisoners.' Russia's law requires 'political' nongovernmental groups to register. By using the term 'political' to describe those jailed for what are, in fact, political reasons, Memorial opened itself to accusations of political activity, and therefore of being a political activist group rather than a civil one. The ghost of George Orwell may be conjured too readily and too often, these days, but this truly is Orwellian."

Andrei Sakharov considered the defence of the unjustly persecuted, and of all those who speak out on their behalf, his central concern. In December 1975, while accepting the Nobel Peace Prize, Andrei Sakharov explained that "the persecution of persons who have defended other victims of unjust treatment… is particularly important." 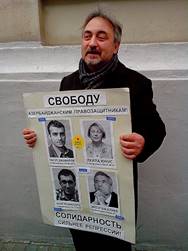 "Freedom", Memorial and Leyla Yunus –
an appeal by Sakharov's associates

Sakharov's 1975 Nobel speech was read aloud in Oslo by his wife. Sakharov himself was standing outside a courthouse in Soviet Vilnius at the time, protesting against the trial of dissident Sergei Kovalev.

In 2009 Memorial received the Sakharov prize. Sergei Kovalev and three other legendary figures in the Russian human rights movement – friends and followers of Andrei Sakharov – recently wrote a joint appeal to the European Parliament on behalf of Leyla Yunus, who has withstood autocratic pressure for decades, to give her the 2014 Sakharov Prize (the full letter is here in English and in Russian).

"As members of the last generation of dissidents in the Soviet Union and followers of Andrei Sakharov, we wish to support our colleagues in Azerbaijan who are unfortunately suffering for the brave stand they are taking to defend human rights in their country. By receiving the award, Leyla would also be a worthy successor to Memorial which was awarded the prize in 2009."

They draw attention to Leyla's courage:

"On July 30, Leyla Yunus was arrested. Arif Yunus was arrested a few days later. They were accused of serious crimes, including state treason, embezzling large sums, illegal commercial activity, refusal to pay taxes and falsifying documents. If convicted, they could both face sentences from 15 years to life imprisonment. All court proceedings are carried out in a highly secretive fashion which is closed even to family members."

"Esteemed members of the European Parliament! Leyla Yunus, as well as her husband Arif, has worked for many years to defend human rights, develop democracy and protect ethnic minorities from discrimination. She would be a most worthy recipient of the European Parliament's Sakharov Prize for Freedom of Thought. Awarding her the prize would also help protect her, Arif and the other 96 recorded political prisoners in Azerbaijan from further persecution and draw attention to the disgraceful human rights situation in a country that is a member of the Council of Europe. The award could make a positive impact on the overall situation in Azerbaijan before it becomes too late for many people."

In their letter the Russian human rights defenders also note that Leyla Yunus has long worked for reconciliation, at times when few others dared:

"In January 1992 Leyla Yunus was the coordinator on the Azerbaijani side of the first meeting of Armenian and Azerbaijani intelligentsia during the Nagorno-Karabakh conflict … In recent times Akram Ailisli has been persecuted by the Azerbaijani authorities for publishing his novel Stone Dreams in which he described the tragic events of January 1990 and life in his home town of Ailis, where Armenians and Azerbaijanis lived together peacefully. Leyla and Arif Yunus were amongst the very few who decided to speak out in defense of the writer. This Armenian-Azerbaijani peace-building work is now being described as state treason."

The idea that dissidents and human rights defenders make a crucial contribution to international peace was one of Andrei Sakharov's central convictions. As Sakharov wrote to US President Jimmy Carter in 1977:

"It's very important to defend those who suffer because of their nonviolent struggle for an open society, for justice, for other people whose rights are violated. It is our duty and yours to fight for them. I think that a lot depends on this struggle – trust between peoples, confidence in lofty promises, and, in the final analysis, international security."

In a new essay published this week Thomas de Waal, one of the world's leading Caucasus experts, tells the story of how Leyla Yunus has advocated for peace and reconciliation for many decades. The essay recalls the role Leyla Yunus, then a young historian, played in the struggles for democracy in the final years of the Soviet Union:

"In Azerbaijan, the struggle was especially difficult. The Communist Party apparatus clung tenaciously to power. The Popular Front of Azerbaijan had a radical nationalist wing that was ready to use violence. All the while the mutually suicidal conflict with Armenia over the disputed region of Nagorny Karabakh was heating up. A small band of academics and intellectuals in the city of Baku were the first to talk about democracy, the first to warn about the dangers of 'provocations' and the first to speak up about the defence of the Armenian minority still living in Azerbaijan. They combined courage with intellectual insight about where their republic was heading.

Leyla Yunus, a young historian, was one of that band, together with her husband, Arif, also a historian and scholar. Yunus was one of the half-dozen founders of Azerbaijan's Popular Front, an organization that modeled itself on the Popular Fronts of Estonia, Latvia and Lithuania, even as they knew how much harder the struggle was in their country. As 1989 unwound, Leyla and her colleagues warned that two extremes--the dinosaurs of the Communist nomenklatura and the nationalist radicals--were feeding off one another in a dangerous game of bluff and provocation."

De Waal quotes from an influential essay Leyla Yunus wrote at the time: "the responsibility of a politician". It is a summary of the principles that have guided her for decades:

"The responsibility of a politician is comparable to the responsibility of a doctor. In both cases lack of professionalism leads to death and injury. And if someone writes, 'Sacrifice cleanses the nation! You know how much we needed this cleansing…' it is absolutely clear to me where this patriot-politician can lead us. Why, in the name of a falsely understood unity of the nation should we march like a herd, behind first one, then another organization, behind this 'father-leader' or behind another one? … My greatest desire is to see the Popular Front of Azerbaijan as a single powerful organization speaking out from a position of democracy, defending with the help of lawyers today with human rights organizations everyone who has been arrested. I dream of an overwhelming victory by the democratic forces of the Azerbaijani people headed by the Popular Front of Azerbaijan in the elections. Our tree of freedom will not bloom soon, and we need to water it with reason and not with a pool of blood."

Saving lives – and the new dissidents

Andrei Sakharov wrote once: "I feel that I owe a debt too great to be repaid to the brave and good people who are incarcerated in prisons, camps, and psychiatric hospitals because they struggled to defend human rights." Today European democrats owe this debt to Leyla Yunus.

Conditions in Azerbaijani prisons are very bad. Two weeks ago, a UN anti-torture monitoring mission had to suspend their work in Azerbaijan due to obstruction by the government, which denied the mission access to prisons. Lawyers of human rights defenders report about many instances of recent torture of prisoners.

Despite a history of health problems, Leyla has not received medicine. She has been harassed by criminal cellmates and was recently beaten in her cell. Meanwhile her lawyer – one of only a handful of human rights lawyers that remain in Azerbaijan – has been intimidated and threatened. Without respectable lawyers to defend Azerbaijan's political prisoners and to relay information about the conditions their clients suffer, the voices of activists such as Leyla will be silenced completely.

These are all reasons why we hope you will award the Sakharov Prize 2014 to Leyla Yunus. If the award is given to her this year to be shared with other finalists it would still be a very powerful signal at a crucial time.

It would also be a reaffirmation that the values for which Andrei Sakharov fought for many decades remain central to the construction of a European order in the 21st century.