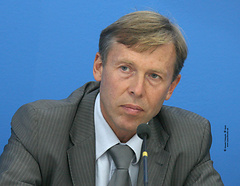 "Mr Strässer, you are a brave man, and I thank you for such an excellent report.

"You can hear in this Chamber how many people want to pressure you not to make this decision, but remember that those who opposed fascists and communists who killed millions of people were political prisoners.

"Remember that in the Soviet Union, when millions of people were killed by the Stalinist and other regimes, all of them, according to the resolution of the Russian Federation, Ukraine and other post-Soviet countries, were declared to be political prisoners.

"So when we hear now that we do not have such a definition, that is a lie.

"If the Council of Europe does not adopt this definition, that will be the start of a very dangerous process that began in the 1930s in Germany and the Soviet Union, when millions of people were killed because of their ideological or other point of view.

"If we agree to the second amendment, thousands of people will wait years for a decision from the European Court of Human Rights.

"The report is brave and timely. With regard to all four items, there should be no political prisoners across our continent.

"Why is this Organisation comprised of 47 members and not 48? It is because Lukashenko's regime in Belarus is a regime of political prisoners.

"This report is a way out of the problem. Thank you."