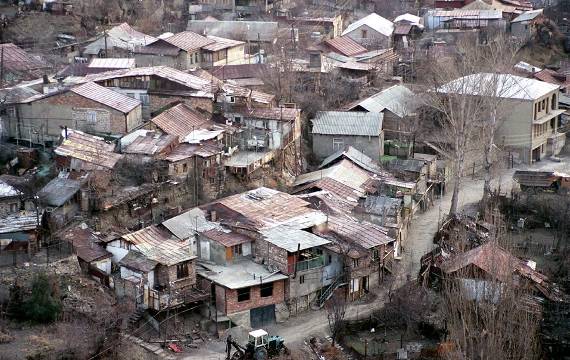 Mikheil Saakashvili had risen to power on the promise to fight corruption, not on a free-market platform. In fact, in 2002 EurasiaNet described Saakashvili as having a "centre-left, pro-government ideology."[244] In 2003, Saakashvili's National Movement Party had opposed the privatisation of strategic companies, including the Ferro Alloy Plant in Zestaponi, the port in Poti and electricity distribution companies.[245] Observers have noted that, in 2004, Saakashvili's primary focus was to consolidate power and root out corruption, while delegating economic matters "first to Prime Minister Zhvania and subsequently to State Minister Bendukidze."[246]  His inspiration, as he repeatedly told Western journalists, was heroic state-builders in the mold of Mustafa Kemal Ataturk. Kakha Bendukidze told ESI that in his view the Rose Revolution government initially had a "leftist" agenda.[247]  All this was soon to change, however.

In summer 2004, shortly before leaving Moscow to take up his post as Georgia's new Minister of Economy, Kakha Bendukidze gave another long interview to the Russian paper Vedemosti.  He explained that he did not possess a "detailed knowledge" of the Georgian economy. He also noted that this was unnecessary: "The knowledge of fundamental principles easily compensates for not knowing some specifics."[248] Since the prescriptions for good economic policies were universal, there was no need for special expertise to turn around the Georgian economy. All that was required was courage, conviction, revolutionary enthusiasm and a team of highly motivated associates working together in different parts of the Georgian government.

Kakha Bendukidze's ability to provide a vision of economic development dovetailed perfectly with Saakashvili's anti-corruption and state-building agenda, placing him at the centre of power from the moment of his arrival in Georgia. His first argument was non-controversial: Georgia's economic situation was disastrous and recent trends deeply worrying. As he kept repeating, unlike Russia Georgia was not "a rich country that had its own source of revenues which allows it not to think about tomorrow."[249] Georgians had "nothing to lose."[250] From this, it followed that Georgia was ripe for economic radicalism:

"If Georgia implements a standard medium-liberal policy, as happened in the Czech Republic, Hungary and partly in Russia, it will grow at 4 percent annually, maybe even faster in the beginning due to the effect of hidden capacity. However, this means that the existing gap between Hungary and Georgia will remain forever."[251]

The country was too poor to resort to anything but radical liberalisation. And by embracing radical reforms, Georgia could do more than merely copy the experience of others: it could strike out and break new ground. This was also the expectation of many of Bendukidze's admirers in Russia upon hearing of his appointment in Tbilisi. As Vitaliy Tretyakov wrote in June 2004 under the title "Bendukidze's Mission" (Rossiiskaya Gazeta), Bendukidze's new position in Georgia offered the chance for a historic experiment:

"we all will shortly witness a highly interesting social experiment. The first goal is to prove the possibility of building an absolutely liberal economy in a given country in the post-Soviet space. The second goal is to prove the effectiveness of economic liberalism in transforming one of the poorest (despite its mountains, sea and fruits) countries of the Commonwealth of Independent States (CIS) into a prosperous one. And, in addition, to demonstrate the capacity of liberalism for building a new economy and maybe a new modern industry virtually from scratch."[252]

Soon Bendukidze would articulate his ambition to create a "Hong Kong on the Black Sea." This involved first and foremost a new understanding of the role of government. For Georgia to grow faster than former communist countries in Central Europe, it had to go further than they did in reducing the role and regulatory powers of the state. At a June 2004 press conference in Moscow, Bendukidze was unequivocal:

"Any economic policy should have maximum deregulation of the economy as its priority. In Georgia, this should take the form of ultra-liberalism, since if Georgia wants to build a normal country, its economy has to grow at very high rates."[253]

In this view, a liberal economic policy brought growth, and an ultraliberal policy brought high growth. The main responsibility of the state was to get out of the way of business:

"To catch up with someone, you have to do something better. Only business can do something better. Only business can create the material basis for existence. In order for business in Georgia to work more effectively than in Hungary, it has to be freed from its entanglements. And I think this is exactly the recipe for a poor country. There is simply no other recipe for a poor country."[254]