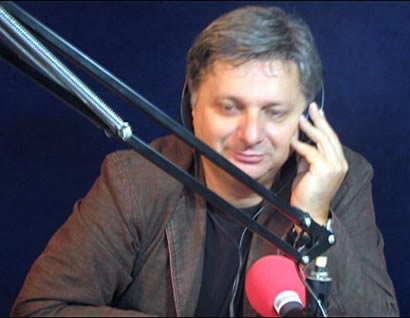 My grandfather was a highlander from around Peja. He 'slipped' down the mountains between the two world wars and ended up in the first city at the bottom – Peja! My mother came from an old Pristina Albanian family. Apart from Albanian they also talked Turkish, the lingua franca of the time. People in their social class did. So, old Serbian families talked in Turkish to old Albanian families…

My father's generation was the first to be educated. This was despite the fact that he was from an anti-communist family. My grandfather had been declared a 'kulak' and after the war his wealth was confiscated. This meant that my father was not awarded a scholarship to continue his education in Belgrade. When this happened my grandfather found him crying because all his schoolmates were to leave for Belgrade, but not him. It was a most important moment in our family history. My grandfather promised that somehow he would find the money. He did, and so it was that my father was able to leave for Belgrade to take Albanian studies in the 1950s.

My first memories are from the mid 60s. Football, of course. Usually, we could not get into the football stadium, so we climbed the trees to watch matches. Then I remember there was a small JNA base in the very centre of Pristina. It had a swimming pool, which seemed very beautiful. My father was a journalist so he got permission for us to go there. It was a great experience. Then I remember a beautiful car, an "Opel Manta" at the beginning of the 1970s. There were so few cars at that time. It was very sporty. It looked like a space shuttle!

In this period we started to have kind of wealth. There were the first colour televisions and modern furniture and fridges. We started to have a middle class. Everyone was beginning to live like everyone else. The university library started to be built and it felt like we were becoming the real capital of Kosovo. All the streets were being paved with asphalt and asphalt was the symbol of progress. We even called the mayor "Asphalt Nazmi"!

At the time our leaders thought they were fighting the old Ottoman heritage and building a new society, a new language and a new man. So they also started to build new blocks of flats, and people wanted to live in them. If you lived in an old house it felt very old fashioned. One cousin exchanged his house for a small flat. He thought he had made a good deal. Today he regrets the deal!

In 1976, suddenly, we had the first modern cafes. The 1970s were the best period we lived through in this place. After 1981 everything started to decline.

In 1980, with some friends I started a new wave band called Gjurmet  – The Traces. After the demonstrations of 1981, in the context of youth in Pristina identifying themselves with Albania, where rock 'n' roll was banned, it meant you had taken a kind of political attitude. We were declaring ourselves for the next civilisation, a 'go west' attitude, and not for communist Albania. Being a rocker meant that you were closer to the Yugoslav type of communism rather than Albanian communism. Amongst many it was… unpopular.

In the 80s we had concerts though and at the Boom festival, in which bands were invited from across Yugoslavia and abroad we could have up to 4,000 or 5,000 people.

In the 1990s apartheid stated. Suddenly everything went underground. The centre of town was dominated by Serbs. For ten years I never entered the Hotel Grand. There were paramilitaries there, secret police, Arkan. I was afraid. There was no social life, except in private homes.

After the bombing started in March 1999, we were picked up by the Serbian police, gathered together and taken to the outskirts of Pristina, to the old train station. When I got there I saw 20-30,000 people. Milosevic had started the crazy idea of deportation. I was afraid in case they were going to start killing. When I realised we were going to Macedonia I was happy.

After '81 the question was how to be heroes in this city. We were listening to David Bowie's "Heroes" – just for one day! We found that it was impossible to be heroes in our city, because we realised that our city did not have a river! We realised that we lived in the only capital without a river, because it had been buried. We were the heroes of the riverless city! Don Quixotes! But, you can't be a hero in a city without a river, can you? When we were being deported though, on the outskirts of town, we could see where the river emerged from underneath the town.

Today Pristina is a mess. People are greedy. They are grabbing houses and land and selling things they don't own. But they are not Pristina people. They are newcomers. They don't feel the pulse of the city. They are building ugly buildings and grabbing public spaces for their own private benefit and ministries and the government are involved. I feel like they are creating a large village out of our city.

That makes for a challenge though. Just like during our rocker days. A challenge to start something, a civic movement, which would aim, one beautiful day, at digging up and revealing our city's buried river!

You need to upgrade your Flash Player to view this movie properly. Please download it here.

Please also insure that JavaScript is enabled in your browser settings.