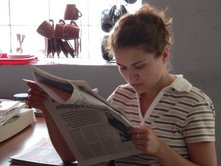 In Brussels on 11 July 2008, the world’s richest countries pledged €1.2 billion for Kosovo’s continuing reconstruction. As a newly independent country, recognized by 20 of the 27 EU members, Kosovo needs financial support to kick-start its economic development. However, will the funds actually be used where they are most needed – for economic development?

According to its critics, Kosovo has already received more than generous financial support. In the first 6 years after the NATO intervention, more than €5 billion was spent on repairing infrastructure, building government institutions and maintaining the UN Mission in Kosovo. With so much expenditure on a relatively small territory, su

rely Kosovo should be ready to stand on its own feet by now?

However, a closer look at the expenditure reveals a very different picture. Of this €5 billion, 42% went on the salaries of international officials, and another 16% went to their local assistances. The balance was contracted and subcontracted through an alphabet soup of international agencies and NGOs, who kept another 20% for their own administrative overheads. So at best, only 20% of these funds was actually available for the reconstruction of Kosovo (For more information on Kosovo’s reconstruction process please see IKS Papers, ‘Reconstruction Survey: Kosovo 2007’ at www.iksweb.org).

But even this 20% – a mere €1 billion – needs closer scrutiny. More than half of this was eaten up by the energy sector, mainly on rehabilitating Pristina’s aging and troubled coal-fired power plant. This has been a highly questionable investment – the electricity utility is able to recover only 30% of its costs from customers, with the result that, even in these hot summer days, power cuts are frequent. The energy sector has crowded out spending on other urgent development priorities – like agriculture (60% of Kosovo’s population lives off subsistence farming) and education (Kosovo has one of the youngest and least educated populations in Europe). Each of these sectors has received less than 5% of donor funding.

In short, when one subtracts the massive costs of the international mission itself, the actual sums invested in the development of Kosovo are very modest indeed.

So how much can we expect of the €1.2 billion pledged to Kosovo last week? Lets take a look at where the money is likely to go.

First, Kosovo has inherited a share of Yugoslavia’s debt to the World Bank, dating back to the 1970s. Some of the money pledged at this donor conference by the United States will be redirected immediately to the World Bank. Of course, this is a great help to a Kosovo government that is struggling to balance its public finances. Yet once again, this is foreign aid that is not available for spending on the development of Kosovo.

Second, a good share of the funds pledged by the EU will go to EULEX , the new EU police mission. This is more about safeguarding Kosovo’s political stability, than it is about promoting development.

At the end, only a fraction of the money pledged will be spend on Kosovo’s economic development. If the international community is serious about helping Kosovo, they must not provide more ‘boomerang’ aid that ends up back in the pockets of highly paid international officials. In addition, if this aid is meant to cover sectors which are not efficient or bring no benefits to the citizens of the recipient country, it should not count as money dedicated for development. If this distinction is not made then the expectations of what can be achieved with the aid are raised, but the results will be ever more disappointing.