Recently, some people have argued that there is a possibility of a new violent conflict in the Western Balkans. It there anything to this claim, which flies in the face of continued international troop withdrawals from the region?

Let me make the case why these claims are not only implausible but in fact dangerously misleading.

First, if either leaders or voters in the Balkans were to believe that there was a real threat of a resumption of violence one would expect this to be reflected in national defense policies: in military spending and in the size of Balkan armies or paramilitary forces.

This was certainly the case in the late 19th century. Then Balkan states had some of the largest standing armies (in proportion to their populations) in Europe.

It was true on the eve of the outbreak of war in former Yugoslavia in 1991. One toxic legacy of communist Yugoslavia’s policy of armed non-alignment was an abundance of arms and paramilitary formations, a population trained and educated in the spirit of partisan warfare and popular defense, and a large number of intelligence agencies and special forces in addition to the huge and expensive Yugoslav Army and its enormous network of domestic defense industries.

It is also the case today in the South Caucasus: a region which in the early 1990s experienced a similarly tragic trajectory of war, ethnic cleansing and aggressive nationalism as the Balkans did. Today’s leaders in Georgia, Armenia and Azerbaijan (not to mention Russia) certainly consider the very real possibility and threat of a return to war in a region, full of unresolved (frozen) conflicts. This is reflected in their rhetoric. It also has a measurable influence on policies and budgets.

However, one of the most interesting developments in the Western Balkans in recent years has, in fact, been the demobilisation of formerly highly mobilised societies. Let us not refer to trends as hard to measure as better neighbourly relations or a decline in interethnic tensions. Let us focus instead on hard facts concerning military spending and serious violent crime. 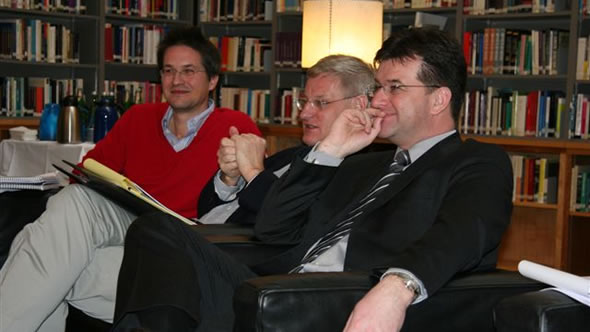 I prepared some tables to illustrate this argument for a recent brainstorming on EU Balkan policy that took place in Vienna (participants in the meeting included foreign ministers Carl Bildt, Miroslav Lajcak, analysts Mark Leonard and Ivan Krastev, Vesan Pusic and a few other Balkan analysts).

First, men under arms and defense spending. Let’s compare what has happened in the Balkans with trends elsewhere on the European periphery in recent years.

The last five years have seen growing military spending in the Caucasus. At the same time this period has seen a decline in defense spending and in the number of men under arms in the Western Balkans. As a result there are today, proportionately to the population, two and a half times (!) more men under arms in the South Caucasus than in the Balkans (see Table 1).

Western Balkan countries have also decided to have considerably smaller armies than either Turkey or Greece, their regional neighbours (table 2). And although they are richer than the countries of the South Caucasus, their military budgets are significantly smaller (table 3). This means that they can allocate more of their public spending to other things, from education and health spending to public infrastructure.

(The data on soldiers and budgets comes from the most recent ISS publication The Military Balance 2009, except for Kosovo which has some 2,500 active soldiers/paramilitaries)

How about other forms of violence? One alternative theory is that even if real war is unlikely in the Balkans today, there is always the possibility of spontaneous, smaller scale ethnic violence erupting and than getting out of control.

Well, what we can certainly say is that there is no evidence for this in any of the data of recent years. In fact, when it comes to citizens’ inclinations to pick up arms against each other the Balkans, despite the legacies of the 1990s, are considerably more peaceful than other parts of today’s EU (see table 4).