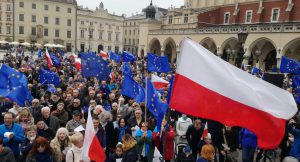 Strong mobilisation in Poland to save the rule of law and independent courts continues:

Today saw the presentation of apetition signed by 120 NGOs, calling on European Commission to act on rule of law and take law on the Supreme Court to the ECJ: https://europonieodpuszczaj.pl/sign-the-appeal/

For this reason, like President Lech Wałęsa, we voice our support for the European Union with regard to the current proceedings taking place before the Court of Justice of the EU on the matter of the Polish Law on Ordinary Courts and we are impatiently awaiting the Court’s verdict.

The history of our continent teaches us that when the foundations of our common liberties are demolished, their restoration becomes extremely difficult.

As Piotr Buras and I wrote, exactly one week ago, in “European tragedy”: this is not a Polish issue only, but an existential issue for all Europeans, which touches the future of the rule of law anywhere in the EU. The more European media highlight what is at stake in Poland today, and what might still be done; the more policy makers across the EU respond, and call on their governments and the EU to act … the better for our common European future.

The EU has no future as a community based on laws if there are no independent courts in all member states.

For more background on what is at stake, and why so many Poles react so strongly in recent days, read the full report here: www.esiweb.org/poland:

– The European Commission launches an infringement procedure against the Law on the Supreme Court immediately before the Court of Justice, with the aim to stop the mass dismissal of judges set to take place in early July and which would be almost impossible to reverse later.

– Important EU member states voice their support for both steps. At the same time the Council must ensure that the European Commissions “reasoned proposal” on the rule of law in Poland, based on Article 7 of the EU’ treaty, is put to the vote as soon as possible, and receives broad backing from member states.

The Polish government’s assault on its judiciary represents a threat to the EU’s legal order and long-term political stability. The EU and national legal orders are now so intertwined as to make up a single patchwork quilt, from which so great a hole cannot be cut, without the whole unravelling.

The rule of law is central to the very existence of the European Union. The second article of the Treaty of the European Union states confidently: “The Union is founded on the values of respect for human dignity, freedom, democracy, equality, the rule of law and respect for human rights.” The EU’s Charter of Fundamental Rights states: “Everyone is entitled to a fair and public hearing within a reasonable time by an independent and impartial tribunal previously established by law.” What is at stake in Poland today is the future of the EU as a project based on core principles such as the rule of law, separation of powers and human rights.”

ESI-Batory paper: European tragedy – the collapse of Poland’s Rule of law (29 May 2018)

There is no freedom without the rule of law.

I would like to express my deep concern about the crisis caused by the far-reaching changes to the Polish judiciary. These raise fundamental doubts at home and abroad. The violation of the independence of Polish courts threatens very negative consequences, for Poland, but also for the entire European Union. The EU, which is the anchor of the Polish raison d’etat, cannot function without free courts in each member state.

That is why I am calling on the Polish government, the European Commission and all political forces in Poland to do their utmost to prevent the irreversible consequences of the changes to the judiciary and the political crisis they have caused.

Only the verdict of an independent court can solve the problem of the independence of the Polish judiciary today. Political agreements cannot serve as a response to these dubious propositions, wherein the tripartite separation of powers, the fundamental principles of law and the Polish constitution are at stake.

That is why I favour asking the Court of Justice of the European Union to evaluate the most questionable changes to the judiciary system, as its judgments are binding both for the European Commission and for EU member states.

I support the European Commission in relation to the proceedings pending before the EU Court of Justice concerning the law on common courts, and I am awaiting the Court’s decision. I am also calling on the European Commission to refer the law on the Supreme Court to the EU Court of Justice under Article 258 of the EU Treaty. Due to the reduction of the retirement age provided for in this law, about 40 percent of the Supreme Court’s judges will have to end their calling prematurely on 3 July.

These provisions raise very serious legal doubts, and the Tribunal should be given the opportunity to judge them. I appeal to all political forces in Poland to support this legal path, which may lead to the protection of the rule of law in Poland and the EU, and to a resolution of the political conflict. I also appeal to the Polish government to refrain from taking any actions that would hinder such a solution.