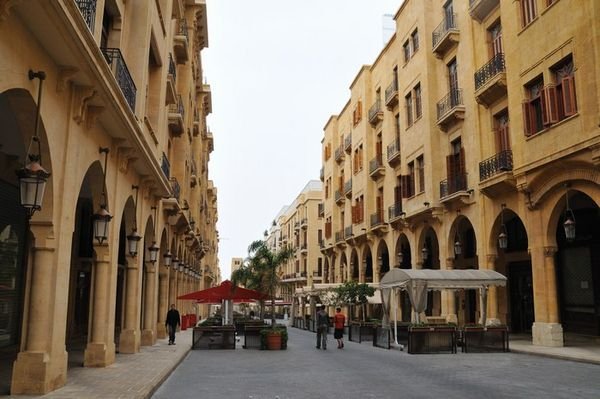 It is my prefered routine upon arriving in a new, unknown city: First, drop all luggage at the hotel. Second, take a taxi to the nearest foreign language bookstore. Third, find a nice cafe in the city centre to read through the pile of new books on the country in question. Forth, go for a walk, get lost in the city, take a taxi to criss cross the town from one end to the next. Then meet people who live here from all walks of life.

This is how I ended up here: in the rebuilt downtown of Beirut, on the Place d’Etoile in an outdoor cafe, opposite the Lebanese Parliament. Before me a stack of books: “At home in Beirut – a practical guide to living in the Lebanese capital”, “Lebanese cinema”, “Paradise divided”, “Refik Hariri and the fate of Lebanon”, a few books on the history of Lebanon, two books on the Lebanese Hizbollah, and one collection of speeches by Hizbollah leader Nasrallah. In addition a map of Lebanon, a few policy papers by the Carnegie Middle East Centre and Oliver Roy’s “The Politics of Chaos in the Middle East.”

The weather is perfect to sit outside. The downtown is quiet: the only sounds one hears are the chattering of some neighbours on the other tables in the cafe – mixing Arabic, English and French words within every other sentence – and some children playing football under the bored glances of the soldiers near the clock tower. This peace is also due to the fact that cars are not allowed to enter this area. Guards with machine guns control everyone walking through checkpoints before one reaches the Place d’Etoile and the downtown area. There are numerous check points in the city still, soldiers standing in front of little wooden guard houses, like those outside royal palaces in EU capitals, painted in the Lebanese colours and boasting the cedar flag. On the way here I also saw two tanks alongside the road and numerous gaps in the architecture of the town, plus a few houses still riddled with bullet holes. However, considering that this downtown area was for almost 15 years the fought-over green line, dividing majority Muslim West Beirut from mainly Christian (Arab Christian and Armenian) East Beirut, there are few traces of the distant war. And the area around the parliament is full of glittery cafes, with outdoor tables and fancy restaurants next to a Christian church and, behind it, a new Ottoman style mosque.

I have come to Beirut to give a talk on Turkey’s Muslim Democrats at the Carnegie Middle East Centre; to do interviews to better understand Turkey’s new foreign policy in the Middle East; and to satisfy my basic curiosity about a country that has been in the news so often since my childhood, with reports of war and assassinations, that I have started to wonder how any peaceful life was possible here. I realise that this is also how people in the rest of the world might feel about the Balkans, an area which has superficially a lot in common with Lebanon: the Ottoman past, different Christian denominations living among Muslims, a tradition of outsiders interfering in domestic politics and a very bad international image. And as one Lebanese asks me, when I explain that I have worked for many years in the Balkans: “Why are people in the Balkans getting on so badly? Here, at least, tensions are at the political level, not on the level of the religious communities, which are getting on more or less well.”

It is an interesting shift in perspective. Of course, Lebanon’s reputation for instability even now is not undeserved. Only this year in May there was fighting between the Shiit Hizbullah and government forces in the very centre of Beirut. The last real war which saw the bombardment of Beirut took place in summer 2006 (when Israel attacked Lebanon in its struggle against Hizbullah). And the string of recent political assassinations, including that of Mr. Lebanon, long-time prime minister Rafik Hariri, in 2005, is worse than anything that one has recently seen anywhere in the Balkans.

So Lebanon is a perplexing case: a deeply imperfect example of a multicultural democracy. But a democracy it is, the most liberal place in the Arab world, and a true patchwork of ethnic and religious identities despite a 15 year horrendous civil war that only ended in 1990. As Paul Salem, director of the local Carnegie Centre, writes in a not yet published book “Lebanon’s quick return to normalcy is proof that failed states – even failed nations, in a sense – may be historically bound phenomena and that failed states, under certain conditions, can succeed again.” For somebody interested in how to manage ethnic and religious diversity in a small country this is indeed an extremely interesting case study.

The muezzin calls to prayer from the nearby mosque. I turn to the practical guide on living in Beirut to get a sense of what everyday life in the city is like. P. 52, security: “Beirut is a relatively safe place. Women walk around during the day dripping in gold jewelery and diamonds with little or no threat to their safety.” Page 40, Adapting to life: “There are few other places in the world where you will come across such a fascinating mix of cultural identities. It thrives on diversity.” Descriptions of different neighbourhoods: Hamra, the “busy shopping street close to the American University in Beirut”; Ashrafieh, a “European style inner city environment”; Rabieh, “luxurious apartments and villas nestled on the wooded slopes”; Khaled, a busy southern suburb where “rental prices are reasonable.” There is a 20 page section with activities for childen, and a long list of international schools. The first impression this guide gives is not of a city teetering on the edge of intercommunal tensions.

On the contrary: a few hours later I meet a friend, posted in Beirut as diplomat, who attempts to persuade me that this is the best possible city to live and to bring up one’s children. Learning that I am wondering wether to relocate eventually from Istanbul to Paris, he objects: why Paris? Why not Beirut? Better weather, good schools, a multilingual environment, a buzzling, endlessly interesting city full of entrepreneurial energy …

I am left baffled. This was not what I had expected to find here. And I think of those uninformed visitors who probably have the same experience coming to Tirana for the first time …

Then, scratching the surface a little, I turn to my other books. “All Lebanese films seemed to be about the Civil War in one way or another”, I read. Sectarianism continues to thrive, the author notes, and this has influenced all post-war Lebanese cinema, “consumed by a feeling of loss and emptiness, where violence lurks at every corner.” And the author continues: “suddenly I realized that Lebanese cinema’s obsession with the war was more than simply that. It was as if the cinema was warning us against the inevitability of what was to come.” And it came: 10 days in May 2008 saw the worst sectarian fighting since the Civil War: “those 10 days in May saw more than 80 people killed and 200 wounded, the takeover of most of Beirut by Hizbullah militants and their allies and street fighting between militiamen of different factions … a nightmarish reminder of the days of the Civil War, where a person’s sect could determine whether they lived or died.”

Yes, my diplomat friend would add later in the evening, there was one (slight) draw-back to settling in Beirut: one should expect that every year there might be a short security crisis, a few days when it is better not to leave the appartment with one’s family, and when armed people might roam around the streets and shot. But these crises would pass, and even then, all depended on where in the city one had one’s apartment.

Is this enduring instability simply a by-product of the complex communal organisation of Lebanese society, with 18 recognised religious communities, a history of tensions, and many weapons? Or is it above all the unfortunate product of wider conflicts in the neighbourhood, from Sunni-Shia tensions elsewhere to the rivalries between the US and Iran, Israel and Syria? I realise, perusing through the other literature, that even reading all the books on my table will not allow me to come to a tenative conclusion. But this is not my ambition, and it would be a foolish one to begin with.

Instead, I note some questions that I hope to find out more about.

The first day in a new country is successful if it leaves one thoroughly baffled, with a string of articulated questions that relate to the burning issues one cares about most, and with a growing appetite to find out more. By the time I return to my hotel in the evening, this has turned into a very successful first day.