Here is a nice book for the summer: Steven Johnson’s Where Good Ideas Come From – The Natural History of Innovation. Johnson writes:

“We have a natural tendency to romanticize breakthrough innovations, imagining momentous ideas transcending their surroundings, a gifted mind somehow seeing over the detritus of old ideas and ossified tradition.

But ideas are works of bricolage. They are, almost inevitably, networks of other ideas. We take the ideas we’ve inherited or stumbled across, and we jigger them together into some new shape. We like to think of our ideas as a $40,000 incubator, shipped direct from the factory, but in reality they’ve been cobbled together with spare parts that happened to be sitting in the garage.”

(if you are looking for an interesting short article to read this weekend, try this: The Genius of the Tinkerer.)

Since good ideas are the results of networks, any think tank’s success to remain fresh and innovative over a period of time depends above all on the quality of its networks. Any series of interesting reports  are the result of the effort of many individuals collecting spare parts, and many long nights trying to cobble them together.

This summer it is fifteen years since we set up ESI in Sarajevo in summer 1999. Since then we have been tinkering with ideas. 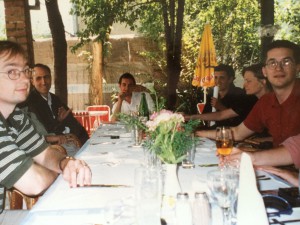 The real birthday: launch meeting in Sarajevo in summer 1999.

By now we have produced a few thousand of pages of writing under the ESI logo.

Are you still short of summer reading? Then take a quick look at any of these, perhaps one strikes your interest.

Highlights and Disappointments over 15 years

Some of our reports have shaped debates: Islamic Calvinists. The European Raj. Caviar Diplomacy.

There have been some successful campaigns, such as our Visa White List Project. Or helping highlight injustices committed against ordinary Bosnian police officers. Or helping Turkey obtain a visa liberalisation process.

Some recommendations were picked up directly by decision makers. In 2001 we wrote a report – in cooperation with Martti Ahtisaari – recommending that the Stability Pact for South East Europe focus on regional energy integration; our second recommendation then, to focus on visa liberalisation, was picked up much later by the European Commission.

In 2002 we called for a big summit on the Balkans under the Greek EU presidency, advocating also that “the states of the Western Balkans could join Romania, Bulgaria and Turkey within the responsibility of a post-2004 Directorate for Enlargement.” And we worked closely with friends in the Greek foreign ministry at the time preparing ideas for the Thessaloniki summit.

Since 2007 we pushed for visa liberalisation for the Western Balkans, later including Moldova and Turkey. We organised a meeting with Balkan NGOs for a coordinated campaign in Novi Sad in October 2007. And pushed the idea of making this a major focus in COWEB in Brussels at the invitation of the Slovenian EU presidency in January 2008.

Since last summer we are working on how to make the current pre-accession process and methodology more effective and inspiring.

We had many disappointments. Advocating solutions for Mitrovica. Arguing for an Economic Development Strategy for Kosovo in 2004. Advocating for a change in Council of Europe policy on Azerbaijan.

For more than a decade we shared our writing experience with others: with ESI fellows, and in capacity building seminars to help new think tanks emerge, from Albania to Kiev. Quite a number have emerged, and prosper today.

We worked a lot on Macedonia: Ahmeti’s Village – on the political economy of Albanian-Macedonian conflict (2002). The economic crisis in the borderlands (2005). The need to give Macedonia candidate status in 2005. Recently the loss of credibility of the European Union today: Vladimir and Estragon in Skopje.

In Turkey we focused on issues ranging from the position of women in society (Sex and Power, 2007) to Turkey-EU relations (A very special relationship, 2010); from the Turkey debates in the Netherlands, Austria and Germany to murders and campaigns against missionaries; from the Erasmus generation (2014) to trials of military (in Kafka’s world, 2014)

In Kosovo we published on the impact of migration on households and families (Cutting the Lifeline), on economic development in Peja and Pristina, on the failure of privatisation and on the future of Kosovo Serbs, arguing against the Spirit of Lausanne. Currently we are working on schools and education policy in Kosovo.

In Georgia we studied reforms and a libertarian revolution, a topic picked up by many other scholars. We looked at the genocide debate and Armenian-Turkish relations. We also did work on Montenegro. On Croatia. On Albania. On Slovenia. On Bulgaria. On Romania. On Serbia.

Finally, we produced documentaries, seen by millions of people on public and private television stations in more than 10 countries: these included 12 films in the series Return to Europe.

(Please check out our new country pages with links to all our work here – reports, picture stories, films)

All of this was possible because of donors who believed that by funding our research, they could contribute usefully to policy debates. Here are the five most important ones  in recent years: ERSTE Stiftung. Open Society Foundations. The Swedish government. The UK government. And Stiftung Mercator.

Yana at ESI event in Istanbul in 2009

Thank you to Yana and Max

Two analysts are leaving us this summer. Both joined us as junior fellows: Yana Zabanova five years ago. She has since worked on a huge number of different ESI reports. And Maximilien Lambertson half a year ago. For their reflections on this experience go here.  Many many thanks!

If this inspires you and you want to join us as a Junior Fellow, please apply here! We look forward to hear from you. (In August the ESI office in Berlin handling applications shuts down. However, you can send in the meantime send any complete applications to me directly: g.knaus@esiweb.org.)