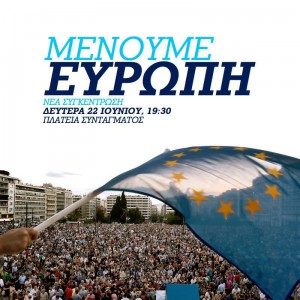 When the Syriza government fails this must not mean that the only alternative are the neo-Nazis of Golden Dawn.

There are pro-European and pro-reform Greeks who will make their voice heard. And there would be a huge reservoir of good-will across Europe for a Greek government that is serious about reforms, does not blame outside forces for its problems and really designs credible reform strategies to replace inchoate reforms proposed by foreigners.

Imagine the next Greek prime minister speaking like this, in Athens as well as in Berlin, in Thessaloniki as well as in Brussels, and also in Riga, Vilnius, Warsaw and Bratislava:

“As you all know Greece is going through an excruciating financial crisis. Under these conditions we need common sense …

… in Greece we are still hesitant to liberate the administration from the rule of the politicians. We are all embedded in a culture which resists the separation between politics and administration.

In the Greek state as a whole, this is the most important reform which is desperately needed. Unfortunately, in reality it has not advanced much.

The current system of a strikingly unreliable administration tends to reproduce itself. And this is clearly the responsibility of both the Greek government as well as of the EU since it hasn’t touched upon this during the last 34 years.

I dare to say that reforms and changes are not enough in the case of the Greek state. We need to revamp the state and its mentality almost from scratch! A new political culture needs to emerge in order to host a genuine separation of powers within the state.

The current institutional framework under which we operate is excessively centralist and any effort of decentralisation has proved to be inefficient. We are still unable to cooperate effectively with the private sector and increase our productivity. An inextricable web of laws determines the framework within which we are forced to operate.

The state needs to stop being hostile to its citizens. We need a government that will stop fooling citizens and proceeds immediately to some common sense action.

Greece is going through a crucial phase. After the biggest recession ever experienced by a developed country in the post-war period, people are in despair.

Political forces must form a united front on certain fundamental issues – like the state’s modernisation – and negotiate from a better position the country’s future.

The view that we can resort to excessive public spending in order to revive the prosperity of the past is not only surreal; it also ignores the current balance of power in our continent.

In order to distribute wealth you need to create favourable conditions in order to produce it. Unfortunately, there are too many Greek politicians suggesting that sustainable growth can come without radical reforms but in some magic way.

What Greece desperately needs, is radical transformation of its state which can in turn bring change to its political culture. This will be our task.”

PS: Note: this speech was actually delivered by a Greek politician in 2014. A politician who was elected on this platform in 2010 and reelected in 2014 in Greece’s second biggest city.

” … we have an obligation to act in order to preserve Greece’s stability and prosperity. This can only be attained within the Eurozone and the EU. In the unfortunate event that things will go astray, we should all unite and protect the people’s well-being from irresponsible political manoeuvring. Greece cannot afford to waste more time and consume itself in endless and irrational political conflict. I will do whatever I can in my power to avert this. If we manage to pass the dire straits of the immediate future, I am hopeful that our country will enter a phase of creative reform and sustainable growth. Greece has demonstrated in the past and Greeks have demonstrated abroad that if they work under decent conditions, they can definitely thrive.”