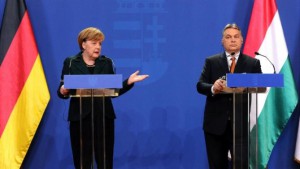 The situation on the European Union’s external borders in the Eastern Mediterranean is out of control. In the first eight months of 2015, an estimated 433,000 migrants and refugees have reached the EU by sea, most of them – 310,000 – via Greece. The island of Lesbos alone, lying a scant 15 kilometres off the Turkish coast and with population of 86,000, received 114,000 people between January and August. And the numbers keep rising. The vast majority of people arriving in Greece during this period were Syrians (175,000). They are all likely to be given refugee status in the EU if they reach it; in 2014, the recognition rate of Syrian asylum applications was above 95 percent. But to claim asylum in the EU, they need to undertake a perilous journey by land and sea.

In the face of this massive movement of people – the largest in Europe since the end of the Second World War – there have been two diametrically opposed responses.

Germany has responded with open arms to the tide of Syrian refugees pouring into its train stations. At the beginning of the year, Germany anticipated some 300,000 asylum claims. By May, this prediction had been revised to 450,000. The German ministries of interior and social affairs are now making preparations for 800,000 this year. The German vice chancellor and Social Democrat Party leader has stated that Germany can cope with a half a million refugees a year for the coming years. Angela Merkel, the German chancellor, has become the face of this generous asylum policy. She has been widely hailed for her moral leadership; but she has also been accused by other EU leaders of making the situation worse, by luring ever more refugees into the EU.

A radically opposed agenda has been pushed by Viktor Orban, the Hungarian prime minister. In early 2015, Orban vowed that Hungary would not let any Muslim refugees enter, making this promise in the wake of the Charlie Hebdo massacre in Paris. He repeated this pledge in May, when the EU discussed quotas for sharing the refugee burden among member states. He warned in a speech in July that Europe was facing “an existential crisis.” He blames the refugees themselves, whom he labels economic migrants, and EU migration policy for the current crisis. And he does not mince his words: quotas for refugees are “madness”; “people in Europe are full of fear because we see that the European leaders, among them the prime ministers, are not able to control the situation”; European leaders live in a dream world, failing to recognise that the very “survival of European values and nations” is at stake. Orban declared the issue a matter of national security, ordered a fence to be built, deployed the military, used teargas and passed legislation to criminalize irregular migration. He has also taken this message to the country at the core of the refugee debate, Germany, convinced that before long German public opinion will force Merkel and her allies around to his way of thinking.

In reality, neither the German nor the Hungarian approaches offer a solution to the ever-increasing numbers of Syrian refugees crossing into Greece and on through the Balkans. Neither a liberal asylum policy nor a wire fence will prevent people from drowning in the Aegean. Although they are diametrically opposed in their views of the Syrian refugee crisis, neither approach is sustainable. This is because it is not the EU but Turkey that determines what happens at Europe’s southeastern borders. Without the active support of the Turkish authorities, the EU has only two options – to welcome the refugees or try – futilely – to stop them.

ESI proposes an agreement between the EU and Turkey to restore control of the EU’s external border while simultaneously addressing the vast humanitarian crisis. Rather than waiting for 500,000 people to make their way to Germany, Berlin should commit to taking 500,000 Syrian refugees directly from Turkey in the coming twelve months. While this would be an extraordinary measure, it is a recognition that the Syrian crisis is genuinely unique, creating a humanitarian crisis on a scale not seen in Europe since the Second World War.

It is essential that these 500,000 asylum seekers are accepted from Turkey, before they take to boats to cross the Aegean. As a quid pro quo, it is also essential that Turkey agrees to take back all the refugees that reach Greece, from the moment the deal is signed. It is the combination of these measures that will cut the ground from under the feet of the people smugglers. If Syrian refugees have a safe and realistic option for claiming asylum in the EU in Turkey, and if they face certain return back to Turkey if they cross illegally, the incentive to risk their lives on the Aegean will disappear.

These two measures would restore the European Union’s control over its borders. It would provide much-needed relief and support to Syrian refugees. And by closing off a main illegal migration route into the EU, it would reduce the flood of people now trying to reach Turkey from as far away as Central Asia. This would help to manage the huge burden currently faced by Turkey.

This proposal would take Germany’s readiness to welcome hundreds of thousands of refugees and redirect it into an orderly process where refugees no longer have to take their lives into their hands in order to claim asylum. At the same time, it would stop the uncontrolled flood of people across Europe, something Orban’s fence can never do.

If this agreement could be put in place quickly, before the seas get even rougher and the cold season closes in on the Balkans, it could save untold lives.

We therefore propose the following two-pronged strategy for addressing the refugee crisis.

First, Germany should commit to taking 500,000 Syrians over the next 12 months, with asylum applications made in an orderly way made from Turkey. The German government is already anticipating and preparing for this number of arrivals. But instead of waiting for them to make the sea and land journey, with all its hazards, they should accept claims from Turkey and bring successful claimants to Germany by air. Of course, Germany cannot, and should not, bear the whole refugee burden. Germany’s offer must be matched by other European nations – ideally through a burden-sharing arrangement agreed at EU level. It may make sense for the EU itself to manage the asylum application process. But such agreements take time to achieve.

Second, from the date that the new asylum claims process is announced, any refugees reaching Lesbos, Samos, Kos or other Greek islands should be returned back to Turkey based on a new Turkey-EU agreement. Initially, there would be huge numbers of readmissions – tens of thousands – presenting a major logistical challenge. But once it is clear that (i) the route through Greece is closed, and (ii) there is a real and immediate prospect of gaining asylum from Turkey, the incentives for the vast majority of people to pay smugglers and risk their lives at sea would disappear. Within a few months, the numbers passing through Greece would fall dramatically.

There are many reasons why this two-pronged strategy is the most credible solution to the crisis. It would place a cap on the number of Syrian refugees accepted into Germany. While amounting to an extremely generous response, it would not be the open-ended commitment that Merkel’s critics fear. It would enable the German government to assure the public that the crisis is under control, helping to prevent public support from being eroded.

It would provide Merkel with a ready answer to Orban’s criticism. The asylum process, while generous and humane, would no longer be generating incentives for desperate people to risk their lives at sea. Hungary and other transit countries would be relieved of the security challenge – and the political pressure – created by the mass movement of refugees, taking the heat out of the debate. It would destroy the business model of the whole criminal underworld of human traffickers.

Finally, it would relieve Turkey of a major part of its refugee burden. Furthermore, with the route into Greece closed, Turkey would cease to be a magnet for migrants from as far away as Central Asia. This would relieve the pressure building up on Turkey’s eastern borders. With Europe finally making a genuine effort to share the burden with Turkey, it can legitimately ask for more cooperation on managing the remaining migration flows.

In the interim, the solution is in the hands of Germany and Turkey. And a quick solution is sorely needed, before the seas grow even rougher and the cold season closes in on hundreds of thousands of desperate refugees seeking a route across the Balkans.