Island of Halki in the Dodecanese

On my way to this year’s Halki seminar, organised every year in summer by the Athens-based think tank Eliamep, I took along a few books on Greece (in addition to a new translation of the poems by Sappho). One was a book on ancient Greek culture, The Greek Experience,  by Oxford don C.M. Bowra; the other was a little paperback I had come across on a previous trip to the Dodecanese islands: Bitter Sea – The Real Story of Greek Sponge Diving.

It is difficult to capture the strange but very real magic of this small island.  It is about a one hour boat trip from Rhodes, almost completely depopulated in the winter and even in the summer season most of the houses in the small village of Emborio are abandoned.  Some houses are still in ruins and I was told that in the early 1980s almost all were … there is still a former settlement that is today a ghost town, overgrown and abandoned, in the middle of the island.

It is easy to understand, however, why even busy people, who receive many invitations, make an effort to attend the Halki seminar.  Eliamep is traditionally excellent at organising events, and succeeds, again and again, to attract interesting crowds. This year was no different. But the genius loci of Halki adds something that goes beyond the specific issues (this year, as most years, including the Balkans, Turkey, the Caucasus and the Middle East)  and makes these days special.

Halki is, first of all, a place conducive to clear thinking. Nature is austere, the earth parched and crumbled, the hills treeless and the small flocks of sheep look emaciated.  There are few distractions: a handful of restaurants and bars, the sound of church bells, a grocer, a baker. I was told that there are some 30 pupils in the local school.  I also learned this year that even DHL does not deliver mail to Halki.

Every few hours a ship arrives from some other Greek island, spewing out newcomers who walk around the small village square  Then they disappear in some of the restored private houses in Emborios, likely to experience what happened to Italian invaders in the 1992 film Mediterraneo (set in the small Dodecanese island of Kastollerizo): to be conquered after a little while by the landscape and the people.

This island is a very good place to read Cecil Maurice Bowra’s classic (first published in the 1950s) on the Greek experience. As Bowra sets out:

“on the whole Greece is physically much the same today as it was four thousand years ago: a land of mountains, which are not huddled together in ungainly lumps but flaunt their peaks in proud independence, and of islands, which are themselves mountains with roots engulfed in the sea … Greece is indeed a hard land, capable of maintaining only a small population, but if this population faces its tasks with decision, it will reap its reward.”

What makes Greece most special, Bowra argues, is its light. It is an experience shared by today’s visitors to Halki :

“The traveller who comes from the west or the north to Greece for the first time may feel a slight twinge of disappointment at the nakedness of its outline and its lack of exuberant colour, but he will soon see that he is faced by a commanding beauty which makes no ready concessions to his appreciation but forces itself slowly and unforgettably on him.

What matters above all is the quality of the light,  not only in the cloudless days of summer but even in the winter the light is unlike that of any other European country, brighter, cleaner, and stronger.  It sharpens the edges of the mountains against the sky, as they rise from valleys or sea; it gives an ever-changing design to the folds and hollows as the shadows shift on or off them; it turns the sea to opal at dawn, to saphire at midday, and in succession to gold, silver, and lead before nightfall; it outlines the dark green of the olive trees in contrast to the rusty or ochre soil; it starts innumerable variations of colour and shape in unhewn rock and hewn stonework. The beauty of the Greek landscape depends primarily on the light, and this had a powerful influence on the Greek vision of the world.”

Seen in this clear light, set against this stark landscape, the gods of ancient Greece were neither alien nor unapproachable. In fact, as any perusal of the biography of Zeus makes obvious, they were constantly subject to the most human of passions, foibles, and obsessions: they fell in love madly, experienced jealousy, exploded in anger, and on occasion gave in to the pleasures and perils of revenge.  They were, essentially, like men and women, with the only difference that they did not need to fear death and could thus live carefree lives. They also had more (but always limited) power.  These Gods moved among humans. Sappho writes her hymn to Aphrodite inspired by an occassion when the goddess of love appeared to her, asked what troubled her and reassured her that everything would turn out well.

This is, of course, the central theme in Bowra’s book: as ancient Greeks thought of their gods as possessing human shape and nature, they also in turn discovered the dignity of the human gift as quasi divine.  Gods and men were both children of the same soil, in the same mould, and just as Greek gods were unlike the nonhuman gods of other civilisations, from the Egyptians to the Maya or the Khmer, so Greek conceptions of the human potential differed fundamentally.

Crafty Ulysees, “famous all over the world for my tricks”, becomes the hero of a civilisation of seafarers, the quintessential adventurer, suffering the gods’ whims, negotiating with them, trying to charm, deceive and persuade them as he tries to make his way home … and in the end very much like them in his strengths and weaknesses.  Bowra concludes:

“In no matter were the Greeks more courageous or more rational than in their assessment of humanity, its limitations, its possibilities, and its worth.  They differed fundamentally from their contemporaries in Asia, who thought that the great mass of men were of no importance in comparison with the god-kings for whose service they existed, and from their contemporaries in Egypt, who believed that life in this world was but a trivial preliminary to the peculiar permanence of life in the grave. The Greeks both recognised that men are worthy of respect in themselves, and were content that they should win this in the only life of which we have any knowledge.”

If you make your way to Greece this year: put Bowra’s text in your suitcase!

On the other hand, if you are fascinated by the mysteries of economic development, you might be interested in the story – almost a fable in its simplicity – told in Bitter Sea.  This is the tragic modern story of Halki and its neighbouring islands: it explains both the beauty and past affluence apparent in the biggest houses in its harbour and the desperation that in the end drove so many of its inhabitants away.

Like all development stories it starts with natural resources and human ingenuity.  The resource in this case are natural sea sponges, aquatic animals living on the sea’s bed and on rocks.  They are biological filters, taking in water through their pores and extracting bacteria for their food.  Sponges are the traditional coal, or oil, of the Dodecanese.  Once discovered as a possible source of wealth people were in fact left with few alternatives, due to the poverty on their rocky islands, and learned to dive for them.

This generated the 19th and early 20th century wealth still visible on the Dodecanese islands of Symi, Kalymnos or Halki.  Tiny Halki once boasted a population of 7,000 at the height of the sponge trade.  Small Kalymnos gave birth to no less than six trading companies based in London.  Symi developed a whole wooden-ship building industry for the task of sponge diving.  As Faith Warn tells us in her book:

“During the 19th century the sponge trade thrived here and supported thousands of people.  The wealth it generated funded – among other things – the construction of comfortable houses, built in Venetian style around the harbour of Emborios {in Halki}”

It was wealth purchased at a terrible price. When diving suits were introduced to the islands in the 1860s, allowing divers to go deeper and be even more productive, “diver’s disease” became a plague killing whole generations ignorant about the dangers of diving so deep (without decompression chambers):

“For a very long time, the continuing use of the suit whilst failing to take the necessary precautions had the most appalling results.  It led to the paralysis or death of not just a few divers but a horrifying majority … According to figures published by the Greek government, in just twenty years between 1886 and 1910, there were a staggering 10,000 deaths and 20,000 cases of paralysis among sponge divers in the Aegean.”

And while folk songs celebrated the heroism of sponge divers, people also told the tale of how sponges came to be cursed by Jesus when, on the cross, he was given a sponge soaked in bile and vinegar by a Roman soldier:

“From that time, they said, sponges were sent to the deepest seas and it was ordained that men would suffer in bringing them to land. The many holes in a sponge represented the many men who would die whilst diving for them.”

Not surprisingly the first line of the folk song Halkitikos, originating on Halki, is “Oh sea, oh bitter sea, oh bitter-surging tide.”  But besides the occasional job as a sheppard, the island economy depended on this tragic harvest.  Not surprisingly emigration was seen by many as offering a way out.

In 1904 some 500 divers left Halki and other islands and went to Tarpon Springs Florida, to dive in the Gulf of Mexico. Today the main road on Halki is called Tarpon Springs.

Later competition from artificial sponges accelerated the decline of the trade and emigration. By the 1960s most sponge diving fleets were dismantled.  By 1980  Halki was almost completely deserted. The remaining sponge divers on Kalymnos were then hit by an environmental disaster in 1986, which Faith Warn suggests was linked to the Chernobyl disaster, which killed off sponges on the bottom of the sea in 1986.  Individual tourism, efforts to encourage cultural activities and events, such as the Eliamep Halki seminar held since 10 years, have since brought some life back to the island.

Halki, Symi and their sponges offer a stark tale of the dependency of humans on their environment.  As the poet Pindar, quoted by Bowra, has written:

“Single is the race, single

Of men and of gods;

From a single mother we both draw breath.

But a difference of power in everything

For the one is as nothing, but the brazen sky

Stays a fixt habitation for ever.

Yet we can in greatness of mind

Though we know not to what goal

By day or in the nights

Fate has written that we shall run.” 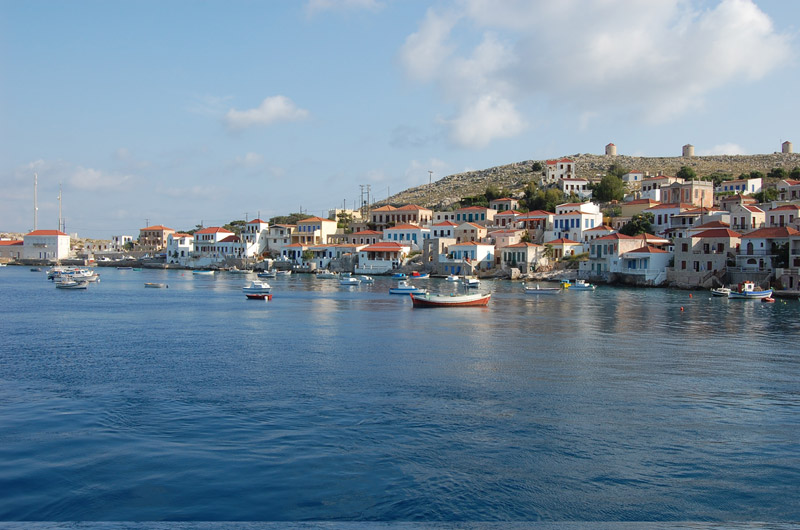 Recommended reading based on Halki Seminar 2009: