How much has the radical party of Serbia changed since the late 1990s? What does it really think about Serbia’s relations with the European Union? And how does it explain its own success in Serbia’s Northernmost (and wealthiest) region, the Vojvodina? 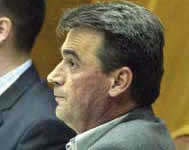 Milorad Mircic, one of Seselj’s deputies and radical strongman in the Vojvodina

To answer these questions I meet Milorad Mircic, one of the leading radical politicians, deputy to the leader Vojislav Seselj, in a pizzeria in the centre of Novi Sad, next to the local Radical Party headquarter. I am meeting a man who has no real doubt that time is finally on his side and on that of his ideas about Serbia and the world.

Any concern I might have had about a lack of clarity on the part of a leading Radical politician turns out to be misplaced. I should have known: the party has started a poster campaign to remind people of the looming trial of Seselj, its leader indicated for war crimes, and prepares to launch another book by him.
Mircic begins by assuring me that the Serb Radical Party (SRS) has obviously not changed either its program or its ideology since the 1990s. The essence of this program remains the commitment to Greater Serbia and opposition to “globalisation”. (Both of this is in fact very visible at first glance by visiting the party’s website)

There can be no compromise on Kosovo (which is no surprise either), Serbia must never join NATO and as for the EU Serbia has other priorities: to become a bridge between East and West, a strong ally of a resurgent Russia. The rise of Russia gives him great confidence, soon more and more people will be speaking Russian in different parts of the world, and even victories by Chelsea cheer him up for this reason.

The so-called revolution of 2000 which toppled Milosevic was a betrayal, and many of Serbia’s pro-European politicians are paid agents of foreign intelligence services. With a face that expresses open disgust Mircic describes the work of members of the current government, including foreign minister Vuk Jeremic who in his view is “a clinical case – a man who speaks like us in public but then secretly asks foreign powers, even Russia, to help split Kosovo from Serbia.” Asked whether there is any event in recent Serb history that makes him ashamed Mircic does not need to think long: the loss of the Krajina in 1995 and the betrayal of the Serb Republic by the Serbian government.

Mircic is originally from Western Bosnia (Grahovo municipality). His home town has been destroyed, he noted, with the support “of your government” (he probably means Germany). It is now in the Croat-Muslim Federation which he does not dare visit, given that it is teeming with Islamic terrorists.

Talking about the Seselj trail Mircic’s eyes sparkle: Seselj is a martyr, he was a dissident in the communist period [note: when he was in prison in Bosnia], and now, in the age of globalisation, this anti-communist fighter is a prisoner again. Currently the SRS prepares for the beginning of his trail in The Hague and for the presentation of his new book. 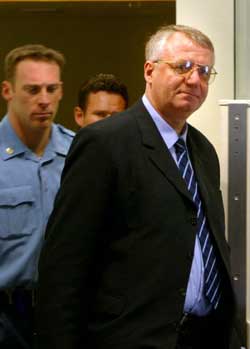