1st of November. I am sitting in the conference room of Hotel Tirana, the big hotel on Skanderbeg square in the heart of the Albanian capital. I first stayed here in 1990 when this country was still communist, there were no private cars on the streets, and I was a tourist guide taking around a group of Austrian adventure tourists on a study tour. Albania was then isolated; the topic today is how to finally overcome this country’s isolation in Europe.

Around the table sit the crème de la crème of Albanian diplomacy. This is the annual Albanian ambassadors’ conference. I realise that I have been invited to present some provocative ideas early in the morning to stir up debate. Next to me are the Italian ambassador to Albania, Ilir Meta, former prime minister, foreign minister and currently chair of the European Affairs Committee of the Parliament, and the head of the European Commission Delegation. The title of my presentation is “The threat of never-ending accession”. The basic idea is that Albania should seriously consider to submit an application for EU membership in the first half of next year. Here, in a nutshell, is the outline of the argument, structured around three sets of “lessons” from the recent Balkan experience: lessons from Bulgaria, from Croatia/Macedonia after the Thessaloniki summit in 2003 and from Turkey since 1999.

The first lesson concerns the success of Bulgaria entering the European Union in 2007, almost exactly a decade after the collapse of its economy in the winter 96/97 (It is a story told elsewhere on this website). It is a case of a striking and surprising transformation. It is also a story of political courage and vision on the part of the European Union, which decided from the outset to treat Bulgaria similarly to other, seemingly more advanced candidates for EU accession. It is, finally, the story of the success of single-minded determination. When Ivan Kostov, upon becoming Bulgarian prime minister in 1997, promised the Bulgarian parliament that he would pursue the goal of EU accession within a decade, polite scepticism was universal. And yet, one decade later it turns out that this ambitious goal was actually within reach.

Set yourself an ambitious goal that seems impossible and then make the process of EU accession the centre-piece of your reform efforts in a very visible manner: that is the Bulgarian lesson for Albania.

The second lesson derives from the “Thessaloniki campaign” that preceded the EU summit in Thessaloniki in summer 2003. I remind the audience that as late as the summer of 2002 there were policy papers circulating in parts of the European Commission that suggested placing the Western Balkan countries in the same category as the countries of the wider European neighbourhood (both the Western Balkans and the neighbourhood were then administratively under the roof of the Directorate General for external affairs, not the DG for enlargement): to view them as European countries, obviously, but with no real immediate accession perspective.

It took the determined efforts of the Greek EU presidency in early 2003, led by Foreign Minister Papandreou, and a broad alliance of like-minded individuals (in the European Commission and among member-states) to produce the more concrete promises of the Thessaloniki agenda.

At the same time the post-Thessaloniki experience shows the importance of the “gatecrashing principle” in pre-accession diplomacy: the need for any country that wants to make progress on the road to EU accession at strategic moments to ignore the advice, warnings and calls for patience coming from EU members and institutions who argue against pressing its case “because this is a bad moment.” Croatia ignored such advice when it decided to apply for candidate status in the wake of the Thessaloniki summit. Macedonia did the same in late 2004, when it too ignored strong lobbying on the part of some EU member states who told Macedonia’s leaders at the time not to consider submitting an application since this was “too early” and might risk rejection.

To “gate-crash” is to insist to go to a party to which you have not received an invitation. But to succeed in this, and then walk away successfully with either EU candidate status or later a date for the beginning of negotiations, a country needs both determination and good preparation. This may seem obvious, but it has some profound implications for the policies of the Albanian government.

Above all, a country needs to be able to tell a convincing story of positive change. This was something both Croatia (following the end of the Tudjman era) and Macedonia (refering to the experience of implementing the Ohrid Peace Agreement after 2001) had. So did Turkey, particularly in the period after 2001. All of these countries pursued reforms while leading a robust and determined diplomatic effort to make sure that achievements were actually widely noticed by EU policy makers.

A story of convincing change is also almost never a story about how a country fights corruption. This may seem counterintuitive: since most people assume that countries in the Western Balkans are and will remain corrupt any talk (including the most positive) about efforts to fight it only remind people of their initial assumption. Fight corruption seriously by putting in place systems of accountability in the administration, but resist talking about it too much abroad: regardless of what you do, it is not going to help improve your image and any possible success is very hard to prove to a sceptic.

Focus on achieving things that can be measured: setting up functioning standards agencies, having credible strategies to implement the EU environmental acquis (even if this takes 15 years it is worthwhile to show that you have thought about the implications of doing so now), talk about social changes that make your country visibly more mainstream European. I mention the debate over women and their position in society, and how Turkey has now overtaken Albania in terms of the number of women in parliament. And deal with the most urgent and most visible concerns of the Commission – such as a civil registry in Albania – without delay.

The party that Albania is considering to gatecrash next year is of course EU candidate status; the question in front of the government is when to submit its application for membership. I warn the audience that it has never yet worked to a country’s advantage to wait too long to knock at the European door. Albania also needs to be prepared in case Serbia submits its application sometime next year not to fall behind.

The presentation is followed by a vigorous debate. In the end I come away with the impression that Albania is in fact likely to submit its application for membership sometime in 2008. 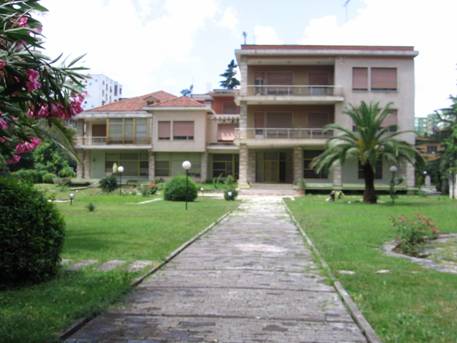 The day ends in the former villa of Enver Hoxha, Albania’s long-time communist dicatator, in the centre of Bloku. This former closed communist residential district has long been turned into the café corner of Tirana, a pleasant Albanian Soho. (for more on the coffee culture of Bloku visit this website)

Inside the villa nothing appears to have changed, however: both the furniture and the books on the shelves are still those put there by Hoxha himself. His residence is now used by the Albanian government, and on this occasion for a dinner hosted by the foreign minister. Lulzim Basha for the foreign speakers at the ambassador’s conference.

The debate on “gate-crashing” continues over dinner. I will keep you posted on how it develops, but given the nervousness this might elicit among EU diplomats it is probably better to say no more here …

One Reply to “The gatecrashing principle (Tirana)”