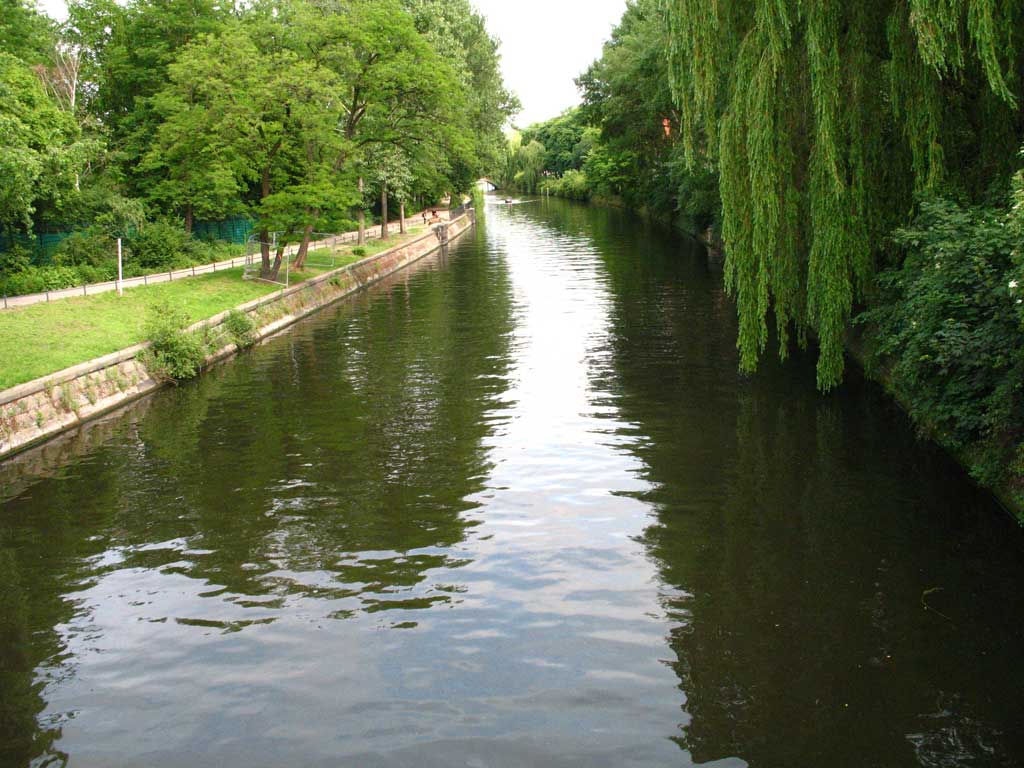 Faust’s Metropolis is the title of one of my favourite books on the history of Berlin. Alexandra Richie writes there:

“It is impossible to escape the ghosts of history which hover above the Reichstag and over Göring’s intact Air Ministry and around the Brandenburg Gate. They waft around the remnants of the great brick and iron railway stations and the pieces of the Wall being ground to gravel on disused wasteland on the outskirts of the city; they linger in the pungent, mustard coloured hallways of the mountrous East German housing projects and in the remnants of the Hinterhof cellars where, during the last century, the poor workers died of typhus and cholera. History is in the Landwehr canal into which Rosa Luxembourg’s body was dumped in 1919 …”

In summer, Berlin’s tragic history appears remote. The city turns into an open-air recreation park, with outdoor cafes, swimming pools in the river Spree, naked volleyball players in the Tiergarten; a place of backpackers and young Germans enjoying life, sitting along the Landwehr canal or one of the many lakes. The lightness of being in Berlin was never sweeter than during the summer of 2006 (when I last spent two weeks here) and when the city hosted the football championship. What a party that was. 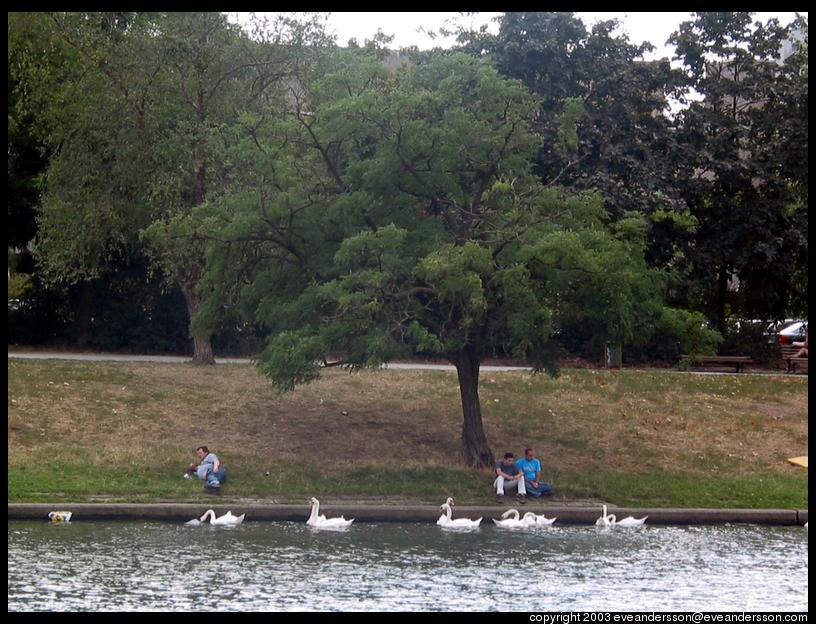 In autumn, however, the city sheds its green cloak. Now some old scars on its body become more visible again; its “empty spaces, windswept fields and vacant lots” appear even more empty and cold. The sky seems to be overcast for months.

But even in the middle of this rainy time there is one exceptional date. On the 9th of November Berlin remembers its most glorious moment, not one of innocent fun, like the football celebration last year, but an undiluted moment of political joy: the fall of the wall.

It still works on me, the spell of the Berlin story. As Joschka Fischer got up last Thursday in a suite in Hotel Adlon to speak about German memories of the 9th of November (the first coup attempt by Hitler in Munich, the terror against Jews in Kristallnacht in 1938, the memories of the fall of the wall in 1989) he had his small audience captured, Germans included.

One knows the stories, has heared many times about the strange fate of buildings in this town as regimes changed. Fischer recalls how his former place of work was first the National Socialist Central Bank, hosting the stolen Nazi gold, then the Central Committee of the East German Communist Party, finally the foreign ministry of a unified Germany. The story of Berlin in the 20th century is like one of those fairy tales a child likes to hear again and again to enjoy the happy ending, and get reassurance that in the end bad things turn out well. The difference, of course, is that the story of Berlin is real. I still remember a professor of mine and a lecture he gave in 1988 in Oxford: whenever he felt dispair at events in the world, he said, he would close his eyes and say “Spain, Portugal”. I would probably say “Berlin, Bulgaria”. (I hope one day I might be able to say “Turkey” as well.)

Telling European stories of success, working for more such stories to come true: that was the motivation behind the gathering in the Adlon Hotel on the 8th of November where Fischer spoke. The occasion was the launch of an institution – the European Council on Foreign relations – that seeks to restore the confidence of Europe in itself and as an actor beyond its borders. It involves as a first step gathering European politicians and former politicians, thinkers and business people (a total of 50, of whom some 30 have come to this meeting) to reflect how a confident EU might make a positive contribution to world developments. A gripping idea, but also at first sight a little presumptous: how could any gathering of a few dozen people have serious impact on the “future of Europe” beyond the walls of the rooms in which it takes place?

It takes a bit of funding to bring together a group of people, pay air fares, hotels and dinners; and somebody with a well-known name – such as George Soros, Martti Ahtisaari or Joschka Fischer – can usually persuade other people to come to a city like Berlin. However, to produce genuinely fresh and powerful ideas, that travel by themselves, become “sticky”, and change reality, is not about either money, connections or fame. It is about the ideas themselves, that can only develop through a commitment to open debate, openess to new perspectives and a healthy humility.

Following half a day of brainstorming in Berlin – first in the new French embassy on Pariser Platz and then in the Adlon – I am now full of confidence that ECFR could succeed in this hybristic mission. One of the main reasons for this confidence was the debate that took place following Fischer’s introduction.

The person of the evening was a young Moldovan who sat next to me throughout the dinner: Nicu Popescu. Together with the director of ECFR (Mark Leonard) he had written the first report of ECFR: A Power Audit of EU-Russia Relations. Still a PhD candidate at the Central European university in Budapest, Nicu grew up in Moldova. He studied both in Russia and in Budapest. I had never met him before joining ECFR. It was obvious, however, that his very biography brought a fresh and urgent perspective to any discussion of European power: to know what it means to look in from the outside, to see the huge promise the EU constitutes in its own neighbourhood, to despair at the frustratingly incoherent EU policy at times all come naturally to a Europeanizer in Moldova. And so it turned out that a report (co)written by a young Moldovan on how the EU might develop a more principled policy towards Russia came to dominate the launch of an institution which included former presidents, prime ministers and political stars who had shaped this new Europe. The commitment to an open Europe could not have been expressed any better through declarations …

Not only this: what also impressed me was the seriousness with which the report (as well as a set of ideas for draft conclusions on Iran policy) were discussed. I had seen Joschka Fischer at previous events in previous years, sometimes grumpy, impatient, reaching for his Frankfurter Allgemeine Zeitung whenever he felt some speaker was not trying hard to say something interesting. In the Adlon, however, and throughout the launch of ECFR, Fischer was at his very best form, analytically and as a personality moderating the debate, visibly committed to the principles of a serious think tank. Listening to a discussion on EU policy towards Russia from an informed Moldovan, Bulgarian, Czech, Finnish or Italian perspective, as took place in the Adlon that evening, was a genuine intellectual treat.

As for the report itself, it sets a benchmark for future ECFR publications. Two examples of this style and directness:

“Russia is emerging as an ideological alternative to the EU that offers a different approach to sovereignty, power and world order. Whereas the EU stands for an idea of order based on consensus, interdependence and the rule of law, Russian foreign policy is motivated by a quest for power, independence and control.”

“Contrary to what many in Europe think, Russia’s neighbourhood policy is better developed, better coordinated and better implemented than the EU’s. Russia devotes more political, economic and even military resources to influencing its neighbourhood than the EU does. Indeed, Moscow has plenty of tasty carrots to offer its allies … ” (in this style it is easy to hear the echo of previous writings by Mark Leonard)

One has not heared such a voice in Berlin in years. Now, a serious debate might be launched not only here but across Europe.

The earlier discussion on Iran, on which many in the room had strong convictions, was no less interesting or impressive. Introduced by Tim Garton Ash, a variety of views were expressed and the conclusion reached that it might be too early to come up with a statement. On Russia, on the other hand, a consensus hardened that the simple but powerful insights of the Power Audit deserved to be made more widely known: conclusion one, that current EU policy towards Russia (and EU lack of unity) benefits no member state of the EU; and conclusion two, that any serious policy of the EU should be based on a sustained commitment to the most important common value underpinning European integration, the rule of law.

Here then are the makings of a potentially very influential institution: a forum of people such as Fischer, Ahtisaari, Belka, Emma Bonino, coming together and seriously discussing innovative, non -diplomatic analyses, prepared to be outspoken, not afraid to offend, oriented towards possible practical conclusions, and open to good ideas wherever they come from; and in addition a set of younger people and researchers from all parts of Europe with a variety of experiences and the conviction that good analysis can make a real difference.

The next day the Russia report was presented to a wider audience in the huge conference room of the German Foreign Ministry. It was the 9th of November, a good day to launch a European initiative in Berlin. It was cold outside, but the ghosts of the building were banished for good. Nicu seemed pleased, and he had every reason to be. It was a good start for a European initiative.

A Power Audit of EU-Russia Relations

One Reply to “Launch of ECFR – A Moldovan in Berlin”