In October 1935 the Italian army invaded Abyssinia. In the same month the Abyssinians appealed to the League of Nations for help. The League condemned the attack. All League members were ordered to impose economic sanctions on Mussolini’s Italy. Then all resolve faltered.

Sanctions were half-hearted. They did not include vital materials such as oil. Britain kept open the Suez Canal, crucial as Italy supplied her armed forces. In December 1935 the British Foreign Secretary and the French Prime Minister met and presented a plan that gave large areas of Abyssinia to Italy. Mussolini accepted the plan.

The League’s involvement was a total failure.The capital, Addis Ababa, fell in May 1936 and Haile Selassie was replaced by the king of Italy. Somaliland, Eritrea and Abyssinia became Italian East Africa. The League of Nations was a corpse even before it perished. It had no more legitimacy.

The Crimea crisis and events in Ukraine today pose a similar threat to the credibility of other European organisations … created, like the League, in the wake of a devastating war with high hopes of launching a new era.  And one organisation already  in the crosshair of the dictator’s assault, already reeling, which Russia was able to join under false pretext and then proceeded to capture with the support of other autocrats in the East and accomplices from the West is the Council of Europe.

Until a few weeks ago one could fear that the Azerbaijani presidency of the Council of Europe, set to begin a few weeks from now in Strasbourg,  would mark the low-point in the history of this once proud organisation. And one might have hoped that, perhaps, it was still possible that the sight of a dictator at the helm of this club of democracies might produce a long overdue shock; wake up democrats across Europe, to pay attention to an institution once created to embody the values of post-war Europe (stated in the European Convention on Human Rights) and recently captured by autocrats from Europe’s east.

Until a few weeks ago I thought there was time to rescue these institutions. Certainly, that it was worth it Today there is good cause to wonder whether the Abyssinia moment has not now also come for Strasbourg.

Unless the Council of Europe reacts to the dramatic illegal occupation of one member state by another member state; unless PACE – the Parliamentary Assembly – issues a strong and unequivocal declaration; unless member states in the Committee of Ministers now take effective actions against Russia; it is hard to see how this “spiritual union” of European democracies can survive as more than a bureaucratic corpse.

It is not hard to envisage a future for the OSCE in this new, harsher, Europe: it will return to being a forum for debates between dictatorships and democracies, similar to the CSCE after the Helsinki Accords were ratified in the 1970s.  It has long been obvious that countries such as Uzbekistan, Belarus, Russia or Azerbaijan are not democracies. The notion that they should participate in setting  high standards for European democracies – which need these standards as much now as ever – debases everyone. Instead let diplomats meet in Vienna and talk (and exchange insults) about peace and common interests. Such a forum is useful as long as it does not serve to legitimize dictatorial rule as “democratic.”

The same is not true for the Council of Europe. Between the  OSCE and the EU it has no future if it does not credibly defend the highest values of democracy. The demise of its credibility creates a void that also needs to be filled: most probably by the European Union, now called upon to define its own human rights acquis more explicitly.

The EU should make human rights central to its association agreements. It should spell out its “political criteria” much clearer, both for accession candidates and for its own members. It should find ways to cooperate with other genuine democracies, from Switzerland to Norway to Moldova in the East.

Of course it would be preferable to preserve the Council of Europe and see dictators such as Putin and Aliyev censured instead, until their countries change their ways. But this looks increasingly unlikely. Instead we will have an Azerbaijani presidency and not even symbolic sanctions against Russia after its aggression. The Palace of Europe in Strasbourg

It is hard to see is how the Council of Europe can function much longer as a hostage of dictatorial and aggressive members. They pay an important share of its budget. They are bent on destroying the values it once stood for. And for some time now they have imposed their vision of the world with impunity.

It should also be noted that there would still be a lot worth rescuing  from the burning house of the Palace of Europe, the Council of Europe’s headquarter in Strasbourg. Conventions, agreements, commissions, initiatives (such as the Venice Commission), all serving their members , all worthy of being preserved … but outside of the clutch of dictators. (The same is less obvious in the case of PACE, which appears increasingly superfluous next to the European Parliament on the one hand and the OSCE Parliamentary Assembly on the other).

The thread does not stop here, unfortunately. Other proud institutions might soon face a similar challenge: one is the OSCE’s Office of Democratic Institutions and Human Rights in Warsaw. It has so far stood up, valiantly, to pressure from the East over its professional work on election monitoring. Why would Putin or Aliyev want credible election observation any more than rulers in Tashkent or Minsk? It is fighting tough battles over its budget. It soon faces a crucial choice over its future leadership. ODIHR’s independence and professionalism must be defended at all costs. In fact, should ODIHR be at risk of losing its credibility as a result of an ongoing Russian and Azerbaijani campaign, or should it be paralysed – then the EU and democracies like Switzerland should stand ready to fund it directly.  To rescue valuable experience. To preserve it as the preeminent  European election monitoring organisation, open to other European democracies.

It now seems only a matter of months before post-Maidan Europe will see a broader debate on the institutional architecture needed to preserve core values and safeguard the lessons from the 1930s and 40s.  And we had better prepare for it. For it now seems increasingly likely that Russian troops in Crimea and Ukraine might have a similar effect on European institutions as Mussolini’s troops had when they embarked on their aggression in East Africa many decades ago. 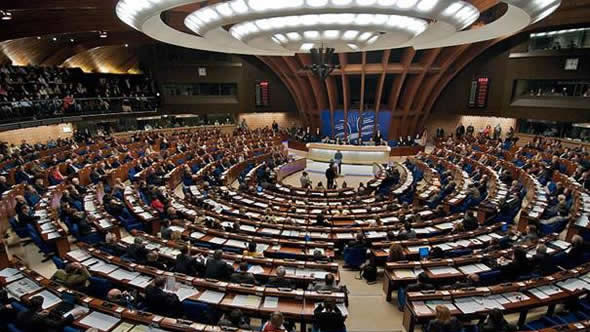 ESI background analysis: how the Council of Europe is losing credibility