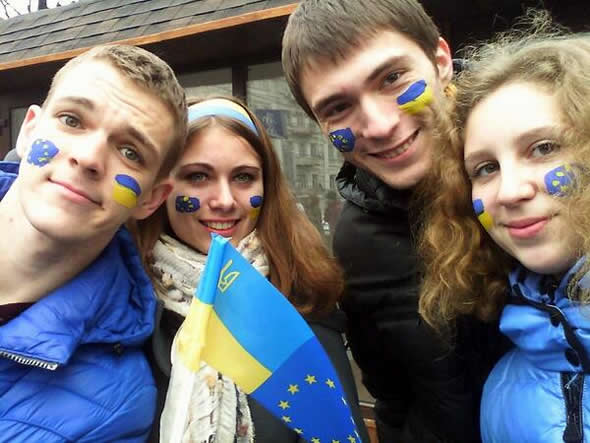 In recent months large numbers of Ukrainians braved first the cold, and then snipers, protesting and waving the blue star-spangled flag of Europe. This has angered leaders in the Kremlin and triggered the dramatic crisis over Crimea. It also left many in the EU confused how to respond. Should the EU, or future Ukrainian governments, withdraw their commitment to association and deeper integration in order to placate a grim and threatening Russia? Is Ukraine’s still undefined “European perspective” worth the risk of offending Russia?

In fact, by defending their right to ratify an Association Agreement with the EU – and the prospect for deeper integration in the future – Ukrainians kept open the single most promising path for a poor country like theirs to change their fate. Here is why.

Leave aside for one moment geopolitics. Focus on the situation of ordinary citizens, the lives of average households living between Lviv and Kharkiv. The most basic fact about Ukraine is that it is poor. In fact, Ukraine is one of the poorest countries in Europe; only Moldova, Georgia and Armenia are poorer. The Gross National Income per head in Ukraine is lower today than it is in Kosovo, which is the poorest country in the Balkans.[1] See the table below:

Now look at the table below. It shows the forty-six richest countries in the world in 2012. The measure of wealth used here is Gross National Income per head (at market exchange rates, taking the average exchange rate over three years), using data published by the World Bank.[3]

To be rich or poor is, of course, a matter of comparison. Here – following the example of Oxford economist John Kay – I take as a reference point the richest country in the world and consider countries to be prosperous if they have at least one eighth the Gross National Income per head of the frontrunner. In 2012 the richest country in the world was Norway, followed by Switzerland and Denmark.

A few things are remarkable in this list. First, most of the forty-six countries were already prosperous half a century ago (North America, Western Europe, Japan, Australia). The biggest exception to this is a group of petro-states (Kuwait, United Arab Emirates, Saudi Arabia, Oman, Bahrain).

Most emerging economies are not yet members of this club: not China, not Brazil, not India, not Turkey. Russia barely makes the list. Becoming prosperous relative to traditionally wealthy countries is very hard. It takes decades of stable growth. Still only a minority of the world’s population lives in these prosperous states: in 2012 about 1.3 billion people, out of an estimated global population of 7 billion.[4]

Second, note all the countries highlighted in bold in the list above. They are the members of the European Union: twenty-four of forty-six countries! Luxembourg and Malta (not included in this table because they have less than 1 million inhabitants), would also qualify as rich. This means that all but two of the members of the enlarged EU of twenty-eight are currently members of the club of the world’s rich countries. There are only two exceptions: Bulgaria and Romania. If the past is any guide, one should expect these two countries to join the club of the rich within another decade.

Third, the most promising strategy to become part of this exclusive club is to make the effort to join the European Union. To see this, compare the above 2012 list of the world’s richest countries with that of 2002 below. This list contains forty-one countries, home to 1.1 billion people.[5]

In the decade between 2002 and 2012, Mexico and Lebanon fell out of the list of the prosperous. And only seven newcomers broke through: two petrol states (Russia, Venezuela); Chile; and four European countries: Estonia, Latvia, Lithuania and Poland.

In 2002 thirteen of the forty-one richest countries in the world were members of the EU. Even then, many of the newcomers, countries that appeared among the rich for the first time in 2002, had focused for years on joining the EU.

Fifth, once an EU member joins the club of rich nations it remains there, despite severe crises later. Portugal, Spain, Greece remain in the club of the prosperous top forty. Other countries, which are on their own, such as Mexico or Argentina, have dropped out of the list.

Take the case of Greece. Its recent economic plight has been seen by some as evidence of the limits of the European Union’s ability to bring about convergence.

Here is the story of the Greek economy, seen through Gross National Income per head since 1980 (Greece joined the EU in 1981). Greece’s GNI dropped in the first years after accession, then grew sharply, most spectacularly after 2000. Between 2010 and 2012 it dropped again: but this is still (despite the obvious hardship) a crisis in a country that has remained one of the most prosperous in the world (and the richest in the Balkans by far).

These tables have strong implications for enlargement policy. The protestors on Maidan, Kiev’s central square, were right: the most promising strategy for ordinary Ukrainians to live a better life is not to stay on the sidelines or to look East, as they had done since gaining independence in 1991, but to integrate with their Western neighbours.

EU integration is not a magic wand. In the case of Greece it has taken a generation to become prosperous. EU integration also does not prevent future crises. But as a generational strategy to catch up it has worked, again and again, for countries from the Atlantic coast to the Baltic Sea. This is because it is a process based on openness and on meeting standards, on learning from the most successful economies in the world and on receiving feedback from them.

Ukrainians, like Finns or Austrians during the Cold War, might well decide to remain neutral in terms of military alliances. NATO is also unlikely to offer Ukraine the kind of security guarantee it has offered to the Baltic States. However, no one interested in the welfare and long-term stability of the Ukrainian people can expect them to renounce the possibility to follow in the path of Poland or the Baltic states when it comes to EU integration. This also holds true for Moldovans and Georgians.

This is not a matter of geopolitics, spheres of influence, or the prestige of leaders: it is about better lives for millions of households. No one can legitimately ask Ukrainians, Moldovans, and Georgians to give up their European perspective just to please the Kremlin. It would be far too big a sacrifice, with consequences for the next generation.

This article is part of a research project on the future of Europe funded by ERSTE  Stiftung in Vienna.

The inspiration for the tables above came from Oxford economist John Kay, one of the leading economists in the United Kingdom. His website: www.johnkay.com. I also strongly recommend his book The truth about Markets for a stimulating introduction to modern economics for non-economists: www.johnkay.com/books.

[1] Gross National Income is the total value of all goods and services produced by all nationals of a country (whether within or outside the country). For a definition go here: http://stats.oecd.org/glossary/detail.asp?ID=1176

[3] These tables omit countries whose population falls under 1 million people: Andorra, Antigua and Barbuda, The Bahamas, Bahrain, Barbados, Bermuda, Brunei Darussalam, Cyprus in 2002 (but not in 2012), Equatorial Guinea, Greenland, Iceland, The Isle of Man, Malta, Monaco, Liechtenstein, Luxembourg, Macao SAR (China), Malta, Palau, San Marino, Seychelles, St. Kitts and Nevis.  These tables also omit Qatar; although it has a population of over 1 million and its GNI per head in 2011 was 76,010. However, the World Bank has no GNI per head figures for Qatar for either 2002 or 2012.