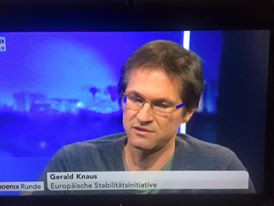 The political scientist Gerald Knaus on working together with Turkey, border controls and Germany’s role in receiving refugees.

DIE ZEIT: Mr Knaus, while Germany finds itself confronted with one million refugees, you are calling for taking in another 500,000.

Gerald Knaus: This is not as absurd as it looks at first sight. After helpless politicians proposed many faulty solutions in the past few weeks, chancellor Merkel needs to present something credible and tangible.

ZEIT: The plan that Angela Merkel will bring to Ankara comes close to a proposal you made already weeks ago – and now it became EU foreign policy. What exactly did you propose?

Knaus: Greece declares Turkey a safe third country. Turkey commits to readmitting all refugees that reach Greek islands through the Aegean, from a point in time to be specified. In return, Germany commits to granting asylum to 500,000 Syrian refugees from Turkey in the next twelve months. In addition, the EU visa requirement for Turkish nationals will be waived next year.

ZEIT: Why should this reduce the number of refugees who want to come to Europe?

Knaus: This offer is only for refugees who are already registered in Turkey. Thus no new incentives for refugees to travel to Turkey would be created by this plan. Then refugee families – half of the Syrians in Turkey are children – would no longer need to make the dangerous trip across the sea and the Balkans. This would quickly reduce the number of boats heading towards the Greek coast. The result would be what Angela Merkel and Horst Seehofer both demand:  control of the external borders and an orderly process – and German emergency relief for refugees in a real crisis situation.

ZEIT: But Turkey is currently reeling from a terrorist attack of which nobody knows who was behind it. Kurds and members of the opposition are brutally persecuted. How is one supposed to declare such a country a safe third country?

Knaus: You have to differentiate between a safe third country and a safe country of origin. For refugees Turkey is a safe third country – even if it is not necessarily a country of safe origin for its own citizens. Currently, these two things are often confused. Under the new Turkish asylum law, refugees can apply for asylum, are not persecuted in Turkey, and are also not deported to Syria. And that’s decisive for this proposal. Whether the EU should declare Turkey a safe country of origin as the EU Commission suggested, raises doubts indeed.

ZEIT: But is it wise to demonstrate to an autocrat like Erdoğan in the run up to the elections how much one is dependent on him?

Knaus: Even Erdoğan needs Germany. Turkey finds itself in the biggest security crisis since the end of the Cold War. Russia is waging war north of Turkey, in Ukraine. The Russian air force is bombing Turkish allies in Syria in an alliance with Assad and Iran, both adversaries of Turkey. And Turkey itself is at war with the »Islamic State« and the PKK. The economy is no longer growing as it was in the last decade, and taking care of two million Syrian refugees is not easy. The refugee issue plays hardly any role in the electoral campaign.

ZEIT: Part of your proposal is visa free travel for Turkish nationals to the EU – what effects would this have in practice?

Knaus: I do not believe in a mass exodus of Turks. In the past few years the trend went the other way; especially from Germany more Turks immigrated to Turkey than did immigrate to Germany. For the young generation in Turkey, Europe only has a real meaning if they can actually travel there. The only danger that I see is if the situation in Southeast Turkey would descend into a full blown war like in the 90s.

ZEIT: But in the current political climate it is completely unthinkable that the chancellor would speak about a number of 500,000 she actively wants to bring to Germany.

Knaus: I know that in the first moment this sounds counterproductive. But you can make it clear to people that without an agreement more refugees are to be expected. Even now there is talk of one million. And in talk shows superficial solutions like fighting root causes, solving the situation in Syria and Libya, or sharing the burden in the EU are being floated.

ZEIT: What about the magic formula “transit zones”?

Knaus: What the German federal minister of the interior proposes would indeed reduce the number of applicants from Balkan countries who are being rejected anyway – but this is not about them. Above all, it is about civil war refugees. Often people will say that the EU needs to better secure its borders, introduce stricter border controls and better equip refugee camps in the region. But none of these proposals will solve our most acute problem: How to reduce the number of refugees reaching the external borders of the EU. No Frontex mission, no European quota, no perfectly equipped refugee camp will stop the desperate from trying to flee to Europe. But if there’s an impression in the public debate that there’s no limit at all for the number of refugees, then soon the readiness to help will turn into fear. That’s why I believe that we need to move fast. Angela Merkel and her political allies in Europe need to show that they – and not the extreme right – have a real solution to offer.

ZEIT: Why should European solidarity suddenly work now if there was already a lack of it in past months?

Knaus: If hundreds of thousands of Syrian children grow up without schooling and without perspective, if we lose an entire generation, this will not be without consequence for European security. There’s a helplessness among the political elite in the entire EU, from Greece to Sweden, nobody has an idea what to do. And extreme right parties profit from this, while having no real solutions to offer either. In this situation Germany is the only country that has the political credibility and economic clout to take the initiative. If Germany can’t deal with the problem, nobody else will manage to do so. But if Germany takes the lead, countries like Austria, Italy, France and Sweden will follow.

Knaus: Orban is right if he calls the hitherto existing international refugee policy hypocritical. On paper there’s a generous right to asylum. But at the same time everything has been done to prevent refugees from claiming this asylum. In recent years, UNHCR resettled only 100,000 refugees worldwide per year to wealthy countries. That’s of course a ridiculously low figure. But Orban’s response to this is to by de facto get rid of the right to asylum altogether. He regards refugees as criminals, as enemies, and refers to Hungarian experiences with the Ottomans, as if they were an invading army. He also says that the refugee crisis is a good opportunity to overcome the “liberal age of human rights.” Le Pen in France, Strache in Austria and others join in into that chorus. In the general helplessness such slogans are becoming more and more appealing.

ZEIT: The right and the left claim that 60 million people are fleeing and that we are only talking about a fraction.

Knaus: That figure is totally misleading. The biggest part of all refugees worldwide stay within their home countries. Syria is the biggest disaster. One fourth of all refugees outside of their home country are Syrians. Most of them now live in Turkey, in Jordan, and in Lebanon. Only a few years ago the number of migrants who tried to enter the EU illegally was 72,000. So this is not about a massive migration of the planet’s poor to the rich North that has been going on for a long time and will never end. This is a specific emergency situation.

ZEIT: Why should erecting borders not work?

Knaus: Angela Merkel said that she has lived behind a fence long enough and she knows that fences won’t help. At first sight that’s a strange argument: The Iron Curtain and the Berlin Wall worked very well and repelled refugees for decades. But for that you need a death strip and a firing order. And even that could not deter many desperate people to try nevertheless. Merkel made it clear that she will not build this kind of fence. You could militarise your borders and regard refugees as enemies. But then you would need to give up European asylum law as we know it.