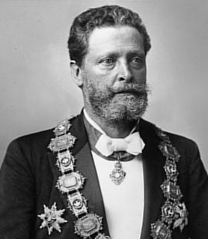 Thinking a lot recently about Karl Lueger, a successful politician in Vienna, one hundred and a few years ago. Weekend reading: an excellent book by Brigitte Haman, “Hitler’s Vienna”. On the crazy and dangerous ideas and political models emerging in the middle of a cosmopolitan metropolis in a complacent era.

What seems new in our politics today is not really new at all, facebok, twitter or other social media notwithstanding. Nor is there anything new in “post-truth” politics – when was “truth” important to nationalists, colonialists, decolonisers, or communists in the 20th century? If you do not have Haman’s book ready, have a look at the below description of one of the most respected democratic politicians in the late Habsburg empire. Then replace “Jew” with “Muslim” or “foreigner” in the text below, and you have a not so secret formula, which looks set to become the inspiration for political leaders in much of what was until yesterday the West … until it stops working.

It worked then, for Karl Lueger. He won elections. He managed to run a decent city administration. He also built a lot. His statue is still up in Vienna. But the consequences of this style of politics in the short and medium term were disastrous for his city, country and continent.

As will be the consequences this time, if this style of thinking, of politics without constraints, is not contained. Or, better put: defeated in elections. This is the only response that matters.

“Karl Lueger was an outstanding example of this new kind of politician: he attempted to get a feeling for the mood of “the people”; he like to hold speeches in dialect, took account of the intellectual level of his listeners, made complex issues simple and tried to entertain his public with humorous remarks.

He was especially successful when he attacked the supposed enemies of his listeners. He stoked antipathy to politicians with different points of view as well as national and religious minorities. His polemical attacks, sometimes extremely drastically formulated, were not directed towards reason but consciously appealed to emotions and instincts. Thus he understood how to use rousing speeches to win over the Viennese population to his cause, consciously invoking stereotypical images of alleged enemies and, in particular, making use of anti-Semitic prejudice. Every set back was reduced to a simple formula: “The Jews are to blame” and stirred up hatred with statements such as: “ We will prevent the oppression of Christians and a new Palestine replacing the ancient Austrian empire of Christians”.

In the process he activated the traditional Catholic anti-Semitism directed against “the people who killed God”. He combined it with anti-liberal and anti-capitalist elements and thus addressed the widespread prejudice against “money and stock market Jews”, “press Jews”, “ink Jews”, i.e. Jewish intellectuals and businessmen. Under his leadership the Christian Socialists regarded their main political task as the reduction of the “rapidly growing power of the Jews” and the reversal of their emancipation which had only taken place in 1867.”

The book itself, with its excellent analysis of the impact of Lueger, Schönerer, and many of the thinkers at the time: in English – http://www.goodreads.com/book/show/871498.Hitler_s_Vienna